How to restore removed applications

How to recover deleted or uninstalled applications on Windows PC, iPhone and Android smartphone 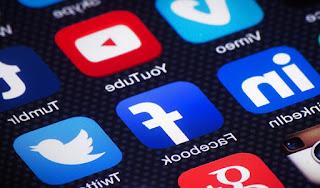 It can happen to everyone to delete a useful app from their phone with Android and iPhone or on their PC with Windows 10 and not be able to find it anymore, especially if the app has a name so common that it gets lost among the hundreds of clones that can be found on Interne and on their respective stores.
To avoid installing the wrong app or installing a completely different app than we were used to, in this guide we will show you how to restore applications removed from Android, iPhone and Windows 10, taking advantage of both the registers present in the stores and the backup tools available for the installed apps, so that we can always recover deleted apps or restore the apps that we want to try again on the device after having uninstalled them some time ago.
Obviously, the restores only concern the device on which we had tried the app at least once, in particular when we try the restore from backup.

To restore the apps removed from a smartphone or tablet with an Android operating system, open the app Google Play Store, scroll side to right to open the side menu or press the icon with the three lines at the top right, open the menu Le mie app ei miei giochi then we scroll on the tab Collection. 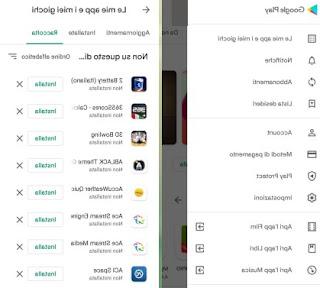 We will find all the apps not currently present on the device but that we have installed at least once on our Android devices. Basically, the apps are sorted in alphabetical order, but we can use the filter system above to see the recently uninstalled apps and immediately restore the one we accidentally deleted, by pressing the Install button next to the app name.
If, on the other hand, we want the app to no longer appear in the list, just press the X-shaped symbol next to the button Install, so as to permanently remove it (it will no longer be possible to restore it if not remembering precisely the name).

If, on the other hand, we want to restore an app removed by mistake from an iPhone, we open theApp Store, press the top right on the profile image, press on Shopping and finally we open the tab Not on the iPhone. 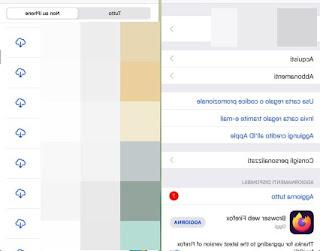 In spite of the name we will find in this session all the apps installed in the past and uninstalled, not just the apps that we have actually purchased (this is because Apple evaluates how you also buy free apps). To restore an app deleted by mistake, simply tap on the cloud and arrow icon, confirm the Face ID or Touch ID and wait for the upload to finish. If, on the other hand, we wanted to hide an app from the list forever, all we have to do is scroll on the name of the app from left to right and then press on the item Hide.

Windows 10 also has a personal store from which to download most of the apps compatible with the operating system, without having to search for them on the Internet. If we have deleted an app that we had downloaded from the integrated store, we can restore it by opening the Start menu at the bottom left, opening the app Microsoft Store, by clicking on the icon with the three dots at the top right and selecting the menu My collection. 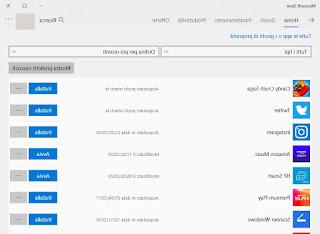 In the window that opens we will have all the apps that we have installed on this computer and on the others associated with the Microsoft account used, all we have to do is press the button Install next to the app to restore.
As for the Apple store, we will find in this screen both free apps and those purchased in the past on the Microsoft Store, without any distinction.
To learn more about the apps available on the Microsoft Store, we invite you to read our guide Best applications for Windows 10 to download for free from the Microsoft Store.


Restore apps from a backup

If the app is not present in the collections of the stores seen a little while ago, we can attempt to recover from the backup of the apps that may have been created before the cancellation. If we have not yet installed any backup app on Android, we can fix it immediately by downloading the App Backup Restore Transfer app. 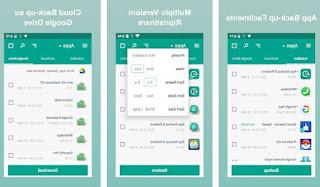 After installing it on the smartphone, start it and choose where to save the backup of the apps on the device (for example on Google Drive); as soon as the time comes to restore an app deleted by mistake, we reopen the app and check one of the backups, so as to reinstall the lost app on the fly.
The app allows you to set automatic backups, to create multiple versions of the same app and, in case of formatting or restoring the device, to restore all the apps after recovering the backup files (even better if we had saved it on Google Drive, since you just need to log in with your Google account).

If, on the other hand, we want to restore a backup from an iPhone, we can proceed using the iTunes app on the PC for backup, as seen in our guide How to backup iPhone.
Do we want to make a backup of the apps and programs on Windows 10? In this case we can both use the advice kept in our guide Backup of installed programs and settings on Windows or apply the full backup tools seen in the guide How to backup and restore your computer simple, fast and complete.

An app is never really deleted as long as it is possible to access the device store, since there are collections of all the apps we have tried in all these years, it will be enough just to search and restore the one we have deleted by mistake or that we want to try again on our device. If the stores don't help, we can always try with the backup files, but only if we have had the foresight to act before the need arises.

To discover new backup tools for Android devices, we recommend that you also read our guide Best Backup Apps for Android.
If, on the other hand, we are looking for effective tools to recover files or portable programs thrown into the trash and deleted by mistake, we can continue reading on our articles How to recover deleted files on PC from hard drive or SSD e Programs to recover files deleted from the recycle bin (Windows).

How to reset Play Store if it doesn't work ❯

Epic asks for the restoration of Fortnite on the App Store: "Irreparable damage for us and for our players"

Whatsapp: 40 Tricks and secrets of chat on Android and iPhone

How to reset Play Store if it doesn't work

add a comment of How to restore removed applications