How to Recover Deleted Photos on Android

Were you doing some cleaning between photos taken with your Android phone and accidentally deleted some shots you needed to keep? Don't despair, there might still be a chance to retrieve them. If the portion of memory on which your pictures were stored hasn't been overwritten with other data yet, you may be able to restore your photos even if you deleted them. Just use the right applications.

If you want to give it a try, below you'll find how to recover deleted Android photos thanks to some apps that you can run directly from your smartphone/tablet or PC. Generally speaking, the ones you run from your computer would be preferable, because this way you won't copy new data to your phone (or tablet) and thus reduce the risk that the photos to be recovered will be overwritten by other data, but the apps that run directly from Android are also very reliable (as well as very convenient to use).

Another important thing to know is that apps that run directly from Android need root. You don't know what I'm talking about? I'll try to explain it to you briefly. Root is a procedure by which you bypass the standard Android security measures that normally do not allow users to act on certain advanced aspects of the system (e.g. adjust the CPU frequency, stop apps from running while the device is on standby and, in fact, thoroughly scan the memory of the phone/tablet to search for files to recover after deletion). It's not always easy to do this, but thanks to the instructions in my tutorial on how to root on Android you should be able to understand more. But now enough chitchat, let's roll up our sleeves and get to work! 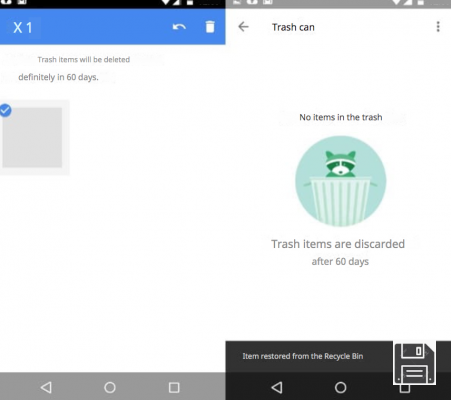 Before getting to the heart of this guide, I'd like to ask you a small question: is the Google Photo app (the one with the colored pinwheel icon) installed on your smartphone? If the answer is yes, you may be able to recover some photos and videos without resorting to more complex solutions.

Maybe you don't know this, but Google Photo has a handy basket, similar to a PC, where all the photos and movies that you delete from the app automatically end up. To access it, open Google Photo, press the burger icon at the top left and select Trash from the bar on the side.

At this point, locate the photos you want to recover and hold your finger on one of them to activate the selection mode. Then put a check mark next to the thumbnails of all the pictures you want to restore and press on the arrow icon located in the upper right corner to complete the operation. 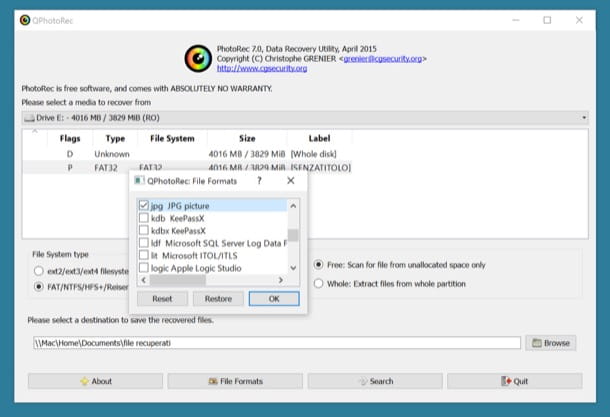 If your Android smartphone/tablet has a microSD card on which it stores your photos and videos, the most effective solution is PhotoRec. It is a free software for Windows, Mac OS X and Linux that restores all the recoverable files from external storage drives. It comes paired with TestDisk, another free software for recovering lost partitions and repairing damaged disks, but you only care about PhotoRec.

Then connect to the website that hosts PhotoRec and TestDisk, click on the Windows item below TestDisk & PhotoRec 7.0 and the two programs will be automatically downloaded to your PC. When the download is finished, insert the microSD from which you want to recover the photos in your PC (you can also use SD or USB adapters, there is no problem), then open the zip archive you just downloaded from the Internet, extract the content in a folder of your choice and launch the executable qphotorec_win.exe.

In the window that opens, select the microSD drive from the drop-down menu at the top, click on the entry for the primary partition of the card (it should be the one named FAT32, FAT16 or exFAT) and tick next to the FAT/NTFS/HFS+/ReiferFS and Free entries.

Now, click the File formats button and in the window that opens, check only next to the JPG or PNG entries so that PhotoRec will only try to recover images in these two formats. To reset the default selection of all extensions, click the Reset button.

To finish, click OK, select the folder where you want to save the recovered photos from PhotoRec by clicking the Browse button and start scanning the microSD by pressing the Search button.

At the end of the scan (which could go on for several minutes) you will find all the photos recovered by PhotoRec in the folder you selected by clicking the "Browse" button. Simple, right?

If you have a smartphone or tablet that doesn't support microSD, you could create a VHD image of their memory and use the image file in PhotoRec to try to recover the photos. It is quite complex and long enough to accomplish. If you want to know more about it, you can consult, or maybe you can "turn" to a friend who knows more about it, this English tutorial published on XDA forum. 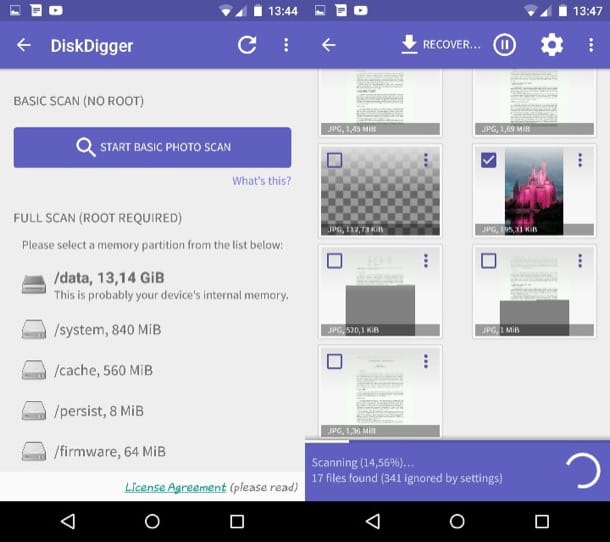 If you don't have Google Photos or the images you want to recover are not in the app's recycle bin, you can use the DiskDigger app that allows you to recover deleted Android photos in a very intuitive way.

The app is available in two versions: a free one to recover photos in JPG and PNG format (which should be sufficient for your purposes) and a paid one that also allows you to recover RAW images and other file types. To work properly it requires that your device has undergone the root procedure.

To recover your photos with DiskDigger, launch the app and grant it root permissions by responding affirmatively to SuperSU or Superuser's warning on the screen. Next, press the No, thank you button to continue using the free version of the app and choose the drive to scan for file recovery: it should be the one with the largest capacity and bold name.

Next, tick next to JPG item if you only want to recover photos taken with camera or next to JPG and PNG items if you also want to restore screenshots and press OK button to start searching for deleted files. 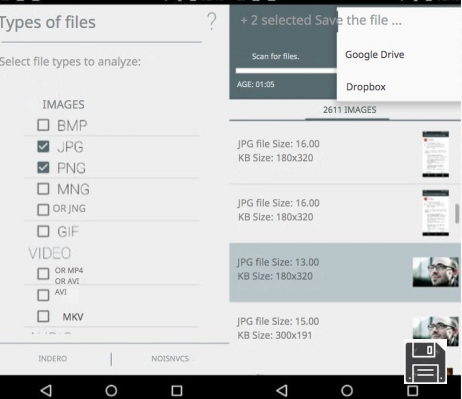 Undeleter is an application very similar to DiskDigger, it performs a thorough scan of the smartphone or tablet memory in order to recover all the data that has not yet physically disappeared from it. It is available in two versions: a free one that allows you to recover only images and a paid one (4.39 euros) that also allows you to recover videos, music, documents, archives, apps and books.

The operation of Undeleter is quite intuitive. After installing the application on your smartphone or tablet, you have to launch it and select the item Restore files from its home screen. Next, you have to grant it root permissions by pressing the Grant button which appears in the middle of the screen and you have to select the drive to scan (e.g. Internal storage to retrieve photos from the internal memory of the device).

Now, choose to do a deep scan, tick next to the JPG and PNG options (or JPG only if you want to recover only the photos you took with your phone's camera/tablet) and press the Scan button at the bottom right to start the image search.

At the end of the scan (it may take several minutes), select the thumbnails of the photos you want to restore and press on the floppy disk icon located at the top right. Then choose whether to save the file to the device memory or export it to Dropbox or Google Drive, press the Restore button and you're done.

Note: By default, the Undeleter's deep scan also shows photos that have not been deleted from the device's memory. To view only those that have been deleted (i.e. hosted by free areas of the disk), press on the second icon at the top right (the one with the three vertical bars and the arrow below) and put the checkmark next to Hide existing files in the box that opens.

Audio Video How to Recover Deleted Photos on Android
Fordatarecovery.com is a website that aims to provide information on how to recover lost data from any device. We love new technologies and useful software, so we want to share as much information as possible and make sure that everyone can recover data lost on any device.
How to Retrieve Dokkan Battle Account ❯

How to Recover a Deleted Folder from PC

How to Recover HD Data

How to Recover Deleted Files from Mobile Phone

How to Recover Deleted Files from SD Card

How to Recover Deleted Emails from Alice Mail

Add a comment of How to Recover Deleted Photos on Android

How to Recover deleted files from your HD

This work is under a Creative Commons Attribution-NonCommercial-NoDerivatives 4.0 International License. 2021 / fordatarecovery.com
X

How to Recover WhatsApp Audio Files

How to Recover Deleted WhatsApp Messages from Sender