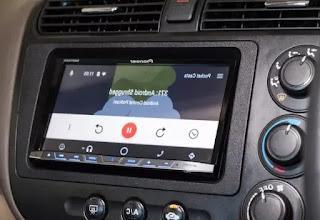 Android Auto is one of the best technological implementations for modern cars, a simple and inexpensive control center that makes every car "smart" and connected with all the apps we are used to. In cars that have an on-board computer with Android Auto you can install many of the uses of the newspaper, so that you can use them while driving, with voice commands and large graphic display and optimized for the on-board computer screen. You can then make a phone call, send a message, listen to streaming music as you would at home, ask for directions, listen to books and many other things.
To set up Android Auto, just connect your phone to the car's USB port to set it up and go. An internet connection does not need to be active in the car, because the smartphone takes care of it.

Without forgetting that you can use Android Auto on every car thanks to the smartphone app, we see in this article the best apps that are compatible with Android Auto, which integrate within its interface, to personalize the intelligent on-board computer experience and expand its functionality.

Listen to reading books and podcasts in your car

Among the apps to listen to Ebook reading, the best is Google Play Books, fully supported by Android Auto.
Even better, it is possible to hear the reading of audio books, which unlike normal books are read by a human voice and not by an artificial intelligence.

Listen to music in the car from your phone

For those who use the smartphone as an MP3 player, thus saving songs inside the phone, Android Auto asks to install Google Play Music which works well, even if it is not the best of its kind. Among the best apps for listening to music on Android, you can use an app like MediaMonkey, simple to simple and customizable, even in Android Auto. Alternatively you can also try DoubleTwist Audio, which also supports Podcasts or JetAudio or even Pulsar Music Player.

App to listen to streaming music in Android Auto

The two best apps for listening to music via the internet are definitely Amazon Prime Music, Deezer e Spotify, usable with subscription (but Amazon Prime Music is free for Prime subscribers). The car stereo, thanks to these applications and the phone connection, allows you to choose any song you want to listen to while driving and to ask for playlists of any kind, without limitations and without ever having to touch buttons. Both Spotify and Amazon Music work well with voice commands and allow you to access saved playlists quickly.


Listen to web radios and podcasts on Android Auto

Applications with online radio are especially useful when traveling, so that you can stay tuned to your favorite station without having to search for the frequency on regular radio. In addition, internet radios offer a virtually unlimited choice of stations at FM radio or web from all over the world, to be able to choose to listen to music of different genres for free (without a subscription) or the political and sports discussions of local stations. Among these apps are great TuneIn, MyTuner e Simple Radio, supported in Android Auto.
Per i Podcast you can always use Tunein, or more specific apps like Podcast Republic, which also supports adding Podcasts via Feed and is virtually unlimited in playing talk shows and episodes from anywhere.

Android Auto was designed to work natively with Google Maps, which is its first and natural application to be able to see driving directions and with support for voice commands. The only other alternative app with maps and road navigator that interfaces in Android Auto is Waze per Android. Waze, which is also from Google, works in a similar way to Google Maps with voice commands and focuses mainly on driving in traffic, to avoid traffic jams and slowdowns.

Depending on the chat usually used to chat and send messages, there are certainly among those best supported by Android Auto Facebook Messenger e WhatsApp, which allow you to listen to messages read when you touch notifications and to respond by dictating by voice.
Other messaging apps also have support for Android Auto, including Telegram and Skype, which also allows you to make calls and video calls in streaming.

App to send and receive SMS from Android Auto

Among the best SMS apps on Android, we can choose to use with Android Auto Press SMS, perhaps the number one of its kind, highly configurable, that works on computers, cell phones and cars.

All other apps for Android Auto

Google has an entire section dedicated to Android Auto on the Google Play Store for Android Auto apps. On this page you can find many other alternatives to the apps listed above, to listen to the radio, to send messages, to listen to news and podcasts, for many other types of content and features.