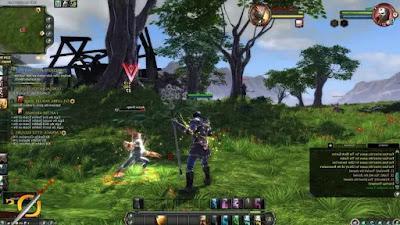 MMO games are always the most played on PC rather than consoles, because they take time, because they are played well with keyboard and mouse, because they are multiplayer and often require chatting or otherwise participating in the community of players, both to forge alliances and to discover the secrets to becoming stronger and more competitive.
That of MMORPGs (Massively Multiplayer Online Role-Playing Game) is a genre based on freedom, with a large number of players coming together and competing.
The new MMORPGs they are full of potential, although they often take far too long to create the character, which can be boring for many.
In this list we therefore see all the new MMOs that deserve time, which are constantly evolving and updated frequently, multiplayer with RPG elements.
Among the MMO games Free to Play or free to download for PC, let's see here, what are the best games to start in 2021 and 2022, recommended because they are more beautiful than the others and because they are more competitive, often with millions of players from all over the world competing online.

1) Blade & Soul is a new MMORPG for martial arts enthusiasts, with visually animated battle scenes and devastating combined attacks.
This MMO proved so popular in Asia that a 10.000-signature petition was signed to persuade its publisher to release it in North America and Europe as it did. The world of this game is inspired by Chinese mythology, with 11 distinct classes and a story of devilish and poignant revenge. Blade & Soul 2 was also recently presented.

2) MapleStory 2 is a new MMO following the successful and historic MapleStory already reported several times in the past. Set in the captivating Maple World, you must free the world of evil with powerful weapons and fantastic sets of armor at your disposal. In addition to deep dungeon crawls, devilish bosses and public events to face with companions and with anime-style graphics, you can enjoy both pursuing missions and relaxing with mini games and decorating your home. In this complete world there are activities for all tastes, almost in a real virtual life.

3) Tera has been consistently one of the best MMORPGs for several years, with traditional action-based MMO combat, a far cry from the click-and-wait systems seen in almost every other MMO. Combining combat with flashy visuals, TERA is truly beautiful to look at and play. The action and combat of the game really is the main point, making for a much faster-than-normal MMO game.

4) Guild Wars 2 was launched in 2012 and is still one of the best ever, thanks to continuous expansions and updates. The vast world of Guild Wars 2 is its main attraction, with dynamic events that draw players, friends and strangers alike.
The game is buy-to-play, but for expansion packs only. The main game is free and, above all, there are no microtransactions to be stronger and have the best equipment.

5) Crossout is set in a post apocalyptic world similar to that of the Mad Max movies, based on construction and customization. You can change body parts, weapons, electric gadgets and create the most powerful and strongest killing machine. You can then join one of the factions and then push the car into the running battle.

6) Revelation Online is one of the new MMORPGs that stands out among others for its elegant style, free combat, incredibly deep character progression and creation systems and an all-open world. It also has a lot of content for all types of players, both those looking for a game with PvE challenges, and those who want to play in PvP battles against other players. This game also has a particularly interesting trick, being able to reset the character at any time.

7) Riders of Icarus is a very addictive free and traditional MMO, with hundreds of potential animals to drive and fight. Wherever you go in Riders of Icarus, you'll find many new and powerful creatures to catch and use, from adorable woodland animals like kangaroos to ancient fire-breathing dragons. Obviously they will have to be tamed before they can exploit their strengths and Riders of Icarus makes this game mechanic as important as dialogue or combat.

8) Mu Legend is an action RPG where you have to mow down a horde of demons with a huge mega sword. This new MMORPG boasts a diverse character creator, a series of leveled and endless dungeons and PvP battles to continue unabated. The main focus is fast and brutal combat, addicting and high level.

9) Eve online is a space-based sci-fi MMO with no paywall and free for a short-range gaming experience. The update allows you to experience space trucker fantasies without having to pay a registration fee, so you can wage a massive galactic war against enemies or take advantage of all the bloodshed to raid. The galaxy is also constantly updated with new regions to explore. You can choose from four different races and change their bloodlines to create a unique character. EVE Online, unlike other MMOs, does not take place within multiple servers but has one large server where they all play together.

10 ) ArcheAge is an ambitious MMO, a gigantic sandbox to live like a fantastic pirate. Like so many MMOs, his world is constantly evolving thanks to frequent updates, the latest being ArcheAge Legends Return which adds dragons to the exceptional range of vehicles and means to fly. Plus, thanks to the progression servers, you can experience the game as it was at launch and see the new features added piece by piece, ideal for new players.

11 ) Rift is a fantastic _MMO online since 2011, free to play, improved over time. The game is clearly inspired by World of Warcraft, is engaging and eventful. The fantastic world of Rift is full of monsters to kill and destroy, earning rewards and clearing the area. This is a game and excels at gathering large groups of players and making them fight in missions and raids.

12 ) The Lord of rings online is for fans of JRR Tolkien's The Lord of the Rings books, based on the same universe. The game allows players to embark on an epic adventure through Middle Earth, fight alongside characters from books and movies, and explore familiar locations. LOTR Online is very similar to any other MMORPG, with all the characters in the game on the same side, without any PvP action.

13 ) Runescape is the oldest game on this list, an evergreen MMORPG that is still updated and popular today. The game has over 250 million accounts and has recently received a downloadable version that has given new life to the title. Runescape takes a very open approach without a linear storyline, with the freedom to choose your own path to progress. The game also allows players to specialize in skills and play according to their particular skill progression. In RuneScape, you create the character with different abilities which then need to be improved to level up.

14 ) Star Wars: The Old Republic is based on the large universe of Star Wars, a great MMO that will surely appeal to all fans of the series. The game has a strong progression driven by player choice and a social play factor that brings together players from all over the world. The puzzle-like combat mechanism is very different from other MMOs and the constant addition of content always keeps the interest alive. Star Wars is still today one of the best MMORPGs, especially for its storyline and gameplay having you can choose to play as one of two factions: the Galactic Republic or the Sith Empire.

15 ) Dungeons and Dragons Online the game that is often cited as the first RPG in history, where you create the characters from scratch. Unlike the tabletop version of the game, which has a turn-based combat system, Dungeons and Dragons Online has a real-time combat engine. The game follows a progression system similar to the other MMORPGs on this list, allowing players to undertake missions to level up and improve their characters.

16 ) Neverwinter is another game inspired by Dungeons and Dragon, set in the fictional city of Neverwinter, with a plot-based progression. The special feature of the game is its feature that allows players to create their own stories and missions in the game.

17 ) Star Trek Online is another MMO with elements from third person shooters to space exploration simulators to the MMO experience, adding a fun game. Fans of the TV series and movies will find a lot of fun finding familiar elements. The developers keep adding new content regularly to keep players hooked on the game.

18 ) Aion Online is another popular game among the most played in the world, with a fantasy setting in which two factions of winged characters face each other. Aion leaves ample room for both solo missions and combat against other players in a combat system that allows continuous attacks and aerial combat

19 ) EverQuest II is a popular MMO game with a fantasy setting, where players have to develop the character in missions and adventures. The player can choose from one of the 18 classes, carry out the many missions to complete and also collect and create items and fight.

20 ) DC Universe Online is a great game, perhaps one of the best new features of this year, dedicated to all comic book nerds. I had already mentioned DC Universe in the article on the Top 10 MMO-RPG games with fighting and action for PC, where you can play as good or as super villain. Most of the game unfolds in solo or team fights, as well as player battles. Players can also use their characters in the Arena and during large-scale raids.

In addition to these not to be forgotten there are also paid games such as The Elder Scrolls Online, World of Warcraft e Final Fantasy XIV very popular and appreciated by lovers of the genre.

The leader of this genre is League of Legends, the most played game in the world, with millions of players actively involved. This is a very competitive game, not very friendly to newcomers, for strong players who want to engage without getting discouraged.

Similar to League Of Legends, you can try Dota 2, a very balanced arena fighting game that requires a lot of time to spend.

With Smite, the MOBa genre of Leagu of Legends is renewed by bringing a third person view, powerful characters, easier to learn and a lot of fun.

Among the news, we also mention Heroes Of The Storm with very dynamic battles seen from above.

I refer to another article for the best FPS MMOs, with 25 Free Shooting Games (FPS) Free and Multiplayer