Best Apps to listen to music on Android 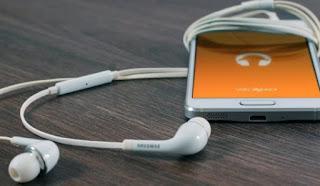 Any Android smartphone can be used for hear music like an MP3 player, with or without headphones. As with computers and in a much simpler way than on the iPhone, it is possible to load music without limitations on Samsung, Huawei and all Android smartphones, by copying the mp3 files to the Music folder of the internal memory or SD card.
To listen to songs, albums and mp3 music tracks saved on your phone, there are dozens of applications available in the store, some of which are better than others and, above all, more feature-rich than the default Music app that is already installed.
In this guide we see a selection of most popular and most popular free music apps on Android.


1) Poweramp is perhaps the most popular app of the series, with over 50 million downloads, definitely a must try for anyone looking for an effective mp3 player.
Unfortunately the free version is limited to use for two weeks, after which you need to purchase the Pro version. PowerAmp has a more complicated interface than most music players because it packs so many features including gapless playback, crossfade, graphic themes , support song lyrics, widgets and playlists of various types, then also a graphic equalizer and various customization options in the settings. You can group songs by artist, album and genre based on mp3 file tags, there is support for bluetooth and wireless headphones, and the ability to set a song as a ringtone.

2) AIMP is the Android version of the famous PC player, perfect for those looking for a light and old-fashioned MP3 player, which supports all audio formats, both MP3 and other lossy and lossless ones. The app supports themes, automatic tag detection, playlists, internet radio, HTTP streaming (from internet sites), headset controls, adding ringtones and then a whole host of track management functions, for organize and order them as you want.

3) Shuttle is another great option for those who want a light and easy to use app, without too many advanced features, which can be considered as an improved version of Google Play Music. There are pretty much all the standard features expected of a standard music player, including support for playlists, a sleep timer, gapless playback, and plenty of theme options (including light and dark mode). Chromecast support, changing ID3 tags, searching for additional folders and themes, require you to purchase the Pro version.

4) Omnia Music Player is an offline music player with a simple interface and also many interesting features. In addition to supporting all lossless and high-resolution audio file formats, the app has a 10-band equalizer and support for voice commands and a mini player that shows the album cover being played.

5) Press is a simple MP3 player, with a good look, but light and therefore also suitable for older or cheaper smartphones, which synchronizes album art and song titles. It doesn't have the advanced features of Poweramp, but it's free and allows you to create playlists, use a widget on the Home screen, lock screen controls, gapless play, fade, change playback speed and timer. As an MP3 player it also works well for sorting your music collection, downloading album art, and selecting folders to include in the library.

6) Phonograph is a free app to listen to music on fairly standard Android phones and tablets, ad-free, with beautiful graphics. It supports the most common music formats and automatically downloads missing information from media such as album cover. A tag editor allows you to manually edit tags and change title and artist for individual songs or entire albums.

7) Pi Music Player is a music app for Android with a sleek user interface, support for folders, playlists, sleep timers, and even support for audiobooks and podcasts. You also have a feature to create ringtones from songs. The only flaw is that the free version has ads and requires you to buy the premium version to get it out of the way.

8) Musicolet is one of the best music players for Android because without ads, no in app purchases, no profit, 100% free. This music player only works with the music saved in the phone and has a super minimal, essential and clean interface.

9) JetAudio is a top-level application for music with Android smartphone, with a lot of features, capable of playing almost all known formats of audio files (including MP3, WAV, OGG, FLAC, M4A, MPC, TTA, WV, APE , MOD, SPX, AIFF). jetAudio has a simple design, with the ability to explore music tracks by artists, albums, songs, folders and playlists. Very useful the 10-band equalizer with 32 different audio presets, powerful music playback options and sound effects with support for fading and without pauses to hear the music.

10 ) Rocket player (free version) aims to be a complete music player for both advanced and basic use. It has a 5-band equalizer, fade in and out effect when playing and stopping, playlists. Rocket also works with iSyncr to sync podcast bookmarks, playlists and songs on iTunes.

11 ) doubleTwist Player is a historical app for listening to music on Android smartphones, with beautiful graphics and all the basic features of an mp3 player. This mp3 player works particularly well for syncing music from your PC or Mac, including iTunes collections.
Among other features, it has support for podcasts, then the ability to download album art in which the songs are included and also support for streaming music to other devices.

12 ) Music Player - MP3 Player & 10 Bands Equalizer is a well-known, very light player which only supports basic file formats. With a 10-band equalizer, bass boost, gapless playback, built-in tag editor and some options and themes for customization, it remains among the most comprehensive, even able to suggest the music that best suits our tastes.

13 ) Impulse Music Player is designed to be a gesture controlled music player, perfect for any situation where you can't waste time looking for buttons and when driving. In addition to gesture controls, Impulse Music Player supports a number of useful features such as: 5-band equalizer and virtualizer, gapless playback, cross-fade, metadata editing, automatic image downloads for albums.

14 ) Playerpro it has all the standard features of a premium music player, so choosing it depends on whether you like its interface, with a unique and original design compared to other apps. Special features include personalized custom playlists, voice search and integration with the Google assistant.

15 ) Folder Player is another great music player for Android, less popular but still updated and developed, with equalizer, bass boost and other options to customize listening to music. In addition to working well, Mort Player allows you to choose which folder to use for music, therefore, those who transfer mp3 files from the PC to the mobile phone in a customized location (not in the standard folder of the DCIM / Music SD card), while other players may not find the songs, you can then use FolderPlayer. Mortplayer also has the auto-off, the alarm, the widget, sending via bluetooth and many preferences to customize the graphics.

16 ) MediaMonkey is a powerful music manager, Android version of the popular Windows program with which you can synchronize over wifi. The interface is very nice, with an easy-to-use screen for listening to music, viewing tracks and rearranging them at will.

17 ) Retro Music Player has an interface similar to the iPhone music player, with the possibility of customizing it through themes and colors. It can sort your song collection by songs, artists, albums and playlists, you can browse your phone folders and it also has support for tag management and integration with Last.fm.

18 ) Vanilla Music is a new open source app, which can be used as a music player on an Android smartphone or tablet, light and equipped with a simple user interface. It automatically provides additional information about artists, photos or biographies and allows you to edit titles, artists and album names using the tag editor.

19 ) MusiXmatch is a music player among the best applications to read song lyrics.

20 ) BeatBox Music Player is one of the best free players to listen to music on Android if you want graphics that are beautiful to look at, very light and fluid. In particular, among the various functions, there is a 7-band equalizer and the bass amplifier.

21 ) BlackPlayer Free Music Player is a great music player for Android, with a very elegant dark and black look. The BlackPlayer interface is super easy to navigate, just swipe left or right to switch from one tab to the next. It supports various audio formats and also has a 5-band equalizer.

22 ) Music Player is a music player created for those who want more control over the audio because it allows you to set different parameters and "DSP Effects" that are used to manipulate the sound.

23 ) Music Player per Android instead, it is the default player of Android, simple, light and functional, which was present in almost every smartphone before the arrival of Google Play Music. Although it is a very basic app, it is highly regarded for its essential simplicity, especially for organizing music files and navigating through phone folders.

To finish the list I remember other music apps for Android among which:
- Best applications for streaming music on Android phones and tablets
- App like Shazam to recognize song titles by listening.
- Equalizer on Android to optimize listening to music (4 free apps)

To load music from your computer, there are several programs for transfer files from pc to android mobile.

Best Apps to listen to music on Android