The notification system of the iPhone, with the passage of time, has become very similar to the one in use also on Android. For this reason, it will not be necessary to make unlocks or “deep” changes of any kind to the Google operating system. What needs to be done, however, is the graphical aspect of the notifications.

The theme of my guide, therefore, will be to explain to you how to have iPhone notifications on Android making the appearance of the notification center and lock screen extremely similar to those of Apple smartphones, taking advantage of some features of Android or using third-party apps. Here's everything in detail. 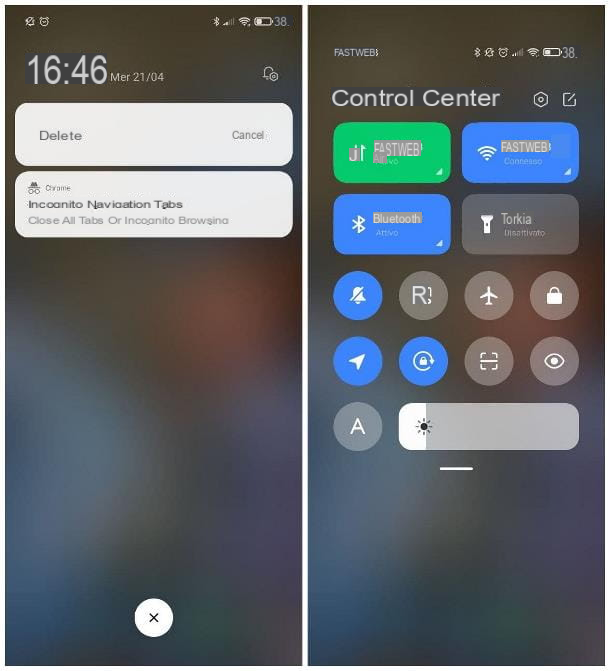 On some specific customized versions of Android are integrated, by default, a series of features capable of distorting the aesthetics of the operating system.

One of these is certainly the MIUI of Xiaomi, pre-installed on most phones of the Mi family (except for the Mi A), on Redmi devices and on POCOs: starting from version 12, MIUI integrates a particular setting, capable of making the Android notification area extremely similar to that of the iPhone and to transform the quick functions into a real Control Center.

You ask me how it is activated? It's that easy. First, open the Settings of Android, by tapping on thegear placed on the Home screen or in the app drawer, tap on the item Display e poi sull'opzione Control center and notification area, residing inside the box System. 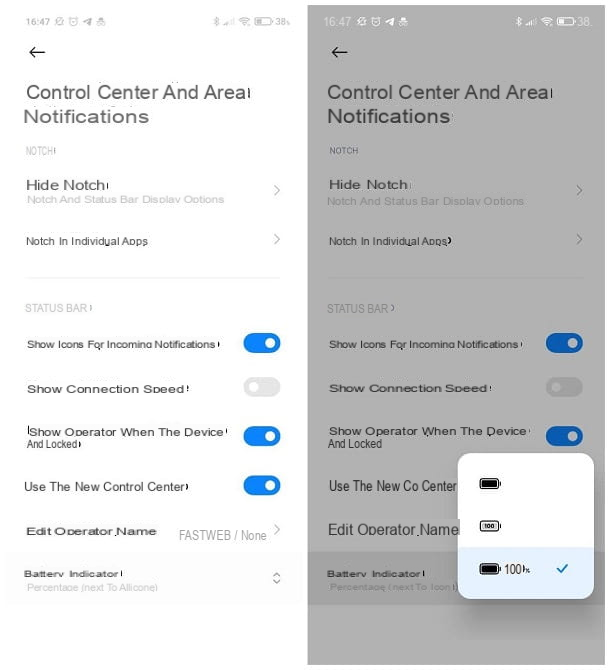 At this point, if your device has a notch, you can make it visible in "iPhone" style by tapping on the item first Hide Notch e poi sull'opzione Don't hide; after that, go back to the previous screen and make sure that the switches correspond to the items Show icons for incoming notifications, Show operator when device is locked e Use the new Control Center are active; finally, touch the item Battery indicator and set it to the option Percentage (next to the icon).


The game is done! With these settings, the MIUI notification area should be similar to that of iOS, even in an obvious way: the space will be dedicated only to the messages generated by the apps and there will no longer be the control icons for the quick functions, which will be moved to the new Control Center. To access the latter, simply make one swipe down, starting from the top right corner of the screen. 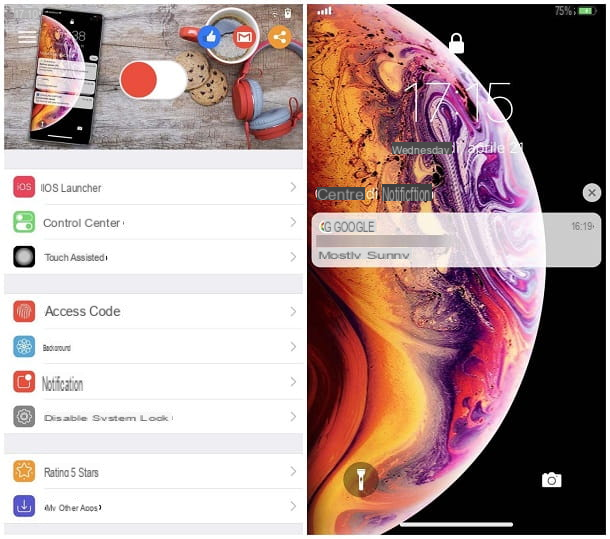 If your smartphone does not have an option similar to the one seen above, fear not: there are some third-party applications, capable of making notifications on the Android lock screen extremely similar to those of iOS.

One of these is definitely Lock screen and iOS 14 notifications: it is a free application, available on the Android Play Store but also on the alternative stores for devices not equipped with Google services, which allows you to change the appearance of Android notifications on the lock screen, within a few tap.

Please note that for this to work for the best, apps like these require access to different parts of the operating system: camera, notifications, storage and display on top of other apps. This thing can pose a potential privacy risk: personally, I advise you not to take risks of this kind just to customize the appearance of your device, but unfortunately, if the version of Android you are using does not include "standard" customizations such as those I mentioned in the previous chapter , you can't do otherwise. In short: the choice is yours, but always be careful when installing apps for customizing the smartphone interface and always check reviews online to verify their reliability.

In any case, to obtain the app mentioned above, search for its name in the reference store of your device (or use this link of the Play Store, if you are reading the tutorial from an Android device with Google services), do tap on the most relevant result (the red icon with the white square and circle) and tap the button Install, to proceed with the download and installation of the app.

Once the installation is complete, start the application by recalling it from the Home screen or from the phone drawer and tap the button Allow, so that it can access the camera.

Now, move from OFF a ON the switch at the top of the app screen and provide all the permissions necessary for its operation: then tap on the item OK, activate the lever for the item Lock screen and notifications that appears on the next screen, tap the button Allow and then move up ON l'interruttore posto accanto alla dicitura Allow viewing on top of other apps. 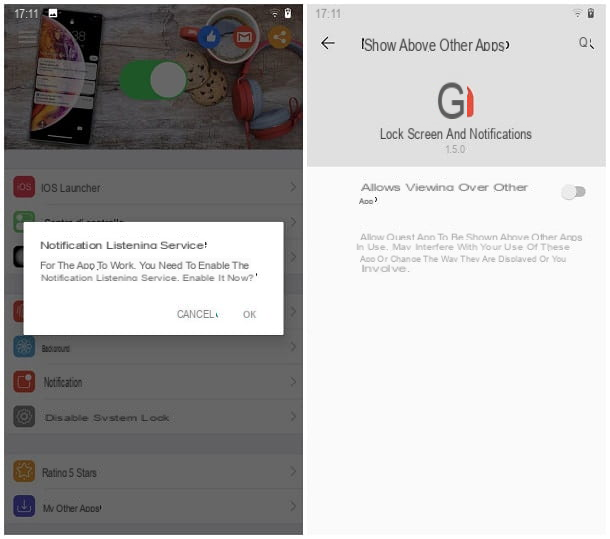 At this point, tap the button a few times Go back of Android, to return to the Lock screen and notifications screen, and verify that the top switch is colored green. If you wish, tap on the option Background to change the wallpaper of the new lock screen.

Now you have to choose whether to use only the app as the only lock screen, or whether to add it to the default Android one: as you can easily guess, this last option makes unlocking the device more immediate, but can represent a security problem; personally, I advise you to leave everything as it is, keeping the default lock screen active.

If, despite everything, you still decide to take the first route, you will have to set a password to be used to unlock the device (which will remain the only active security system) and, subsequently, disable the Android lock screen.

To do this, tap on the item Access code, located on the main screen of the app, and move from OFF a ON the lever that you find at the top of the next panel; finally, specify the code to be used to unlock the device, twice in a row, and that's it.

Finally, once you return to the main application screen, tap on the item Disable the system lock, insertion il PIN, the password or the unlock pattern currently in use and tap on the item Nobody, located on the next screen, to disable the default lock screen.

Keep in mind that, on some editions of Android, an automatic battery optimization system may be active, which stops the execution of an app when it has been inactive for a long time, or prevents it from starting automatically: this behavior could affect negatively on the functioning of Lock screen and iOS 14 notifications, preventing both notifications and the lock screen from being displayed.

To avoid this possibility, you need to open the energy saving options for the app in question, disable battery optimization and activate theautomatic startup, if necessary. For example, on Xiaomi's MIUI operating system, you can access specific options by going to the menu Settings> Apps> Manage apps of Android and tapping on the wording Lock screen and iOS 14 notifications.

Once this is done, move up ON the switch corresponding to the item Automatic startQuindi fai tap sulla voce Energy savings and press on the box No restrictions, in order to exclude the app from any automatic closures due to energy saving.

If you notice that the notifications of some applications are not displayed at all, make sure that they have not been silenced and, if so, proceed to enable them again: I explained how to do it in my guide on how to activate push notifications. 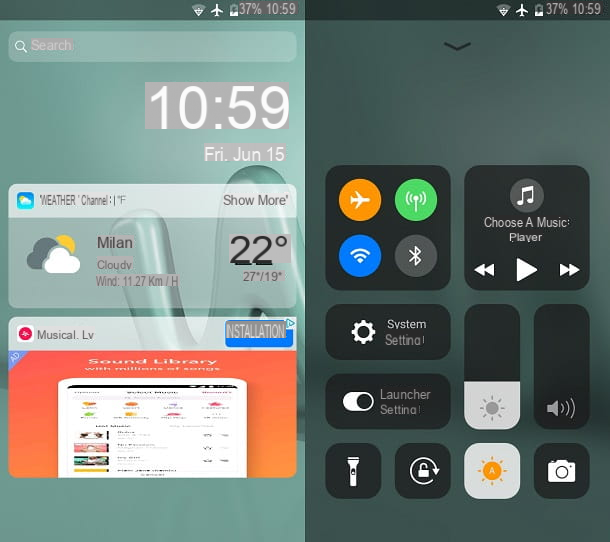 How do you say? Do you love the graphical interface of the iPhone and would like to get something similar also on your Android smartphone, transforming not only the notification center, but also the Home screen and the drawer of the device?

In this case, you will be pleased to know that there are particular launchers for Android, which allow you to achieve exactly this result: on the Play Store and on the alternative markets there are galore, each with specific features and customization options.

To learn more about this possibility, I refer you to reading my guide on how to turn Android into iPhone, in which I have explained everything to you in great detail.

add a comment of How to get iPhone notifications on Android