How to Recover Deleted WhatsApp Messages from Sender

You have read an interesting notification about a message received on WhatsApp but, after selecting it to view the message itself, here is the bitter surprise: it was deliberately deleted by the sender, before you could read it, and all you are left with is a "comic book" containing the words "This message has been deleted". Out of curiosity and seriously intent on accessing the information that has been stolen from you, you went Google looking for information on how to retrieve deleted WhatsApp messages from the sender and ended up right here on my site.

I beg your pardon? Did I perfectly describe the situation you are in? Then I really think I can help you. In the course of this tutorial, I will explain how to view WhatsApp messages deleted by the sender before you can read them. I will also suggest a couple of techniques to help you retrieve old chat messages, including those that you read but deleted later.

So, what are you still doing standing there? Cut out some free time for yourself and read through everything I have to explain on the subject very carefully, and I guarantee that by the end of this reading, you will have acquired all the skills you need to achieve your goal. Having said that, I have nothing left to do but wish you good reading and good luck!

How to recover deleted whatsapp messages from the sender on Android 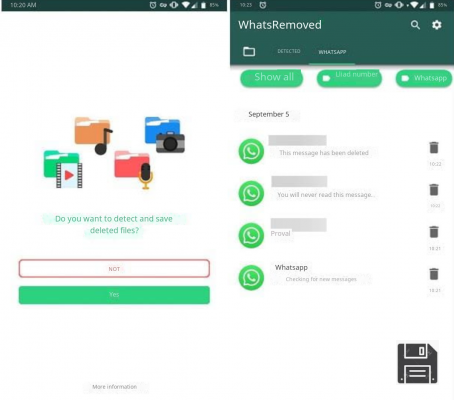 As things currently stand, there are no Android apps developed specifically to recover deleted WhatsApp messages from the sender. In this case, however, you can use a "trick" to get the desired result.

There are, in fact, apps that can "record" the notifications received on your phone, such as WhatsRemoved+, which can save the contents of the preview message after receiving the corresponding notification.

This way, the message in question can be read at any time, even after the sender has deleted the chat (or individual message).

Before we go any further, though, I would like to specify that apps like this only work if WhatsApp notifications have not been disabled, and your Android device must be able to receive the notification before the message is actually deleted.

Finally, I would like to remind you that retrieving or reading chat messages deliberately deleted by the sender can be an incorrect action, which, in some cases, could even lead to serious trouble: I will not be personally responsible for the inappropriate use of the instructions I am going to provide you. Is that clear? OK, then let's get started!

First, download the WhatsRemoved+ app from the Play Store and, after starting it, tap the button to accept the terms of use of the service. Next, make sure the app can access the system notifications by pressing the Yes button, moving the app name toggle to ON and finally confirming that you want to proceed by tapping the Allow button.

Once you've granted the necessary permissions, exit the Android settings area and, after launching WhatsRemoved again, press the Accept button for the second time. Now, check the WhatsApp box, tap the Next button and then press the Yes and Allow buttons to save the received messages and then delete them.

We're done! From now on, the app will record all WhatsApp notifications, including those containing files or messages deleted later by the sender. To view these items, launch WhatsRemoved, tap the WhatsApp tab, and using the green buttons at the top, select the chat you are interested in.

If necessary, you can also go to the Detected tab to view all the files received and then deleted by the sender: voice notes, photos, videos, documents, and so on.

How to recover deleted WhatsApp messages from the sender on iPhone 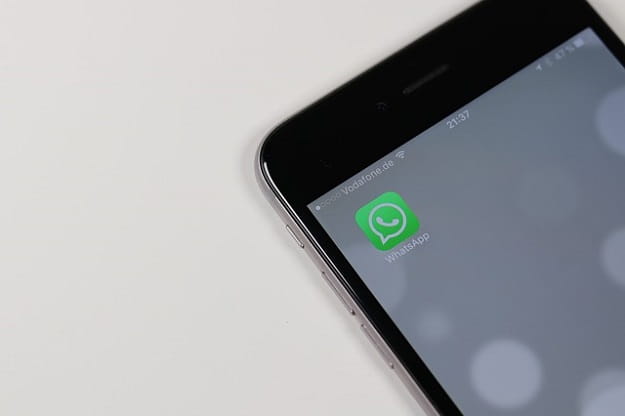 If you have an iPhone and are interested in retrieving deleted WhatsApp messages from the sender on this device, then I don't think I have any good news for you, as there are currently no apps that can accomplish this task in this way.

In addition, iOS does not allow system notifications to be read by apps created by third-party developers: this means, in practice, that you cannot use a trick similar to the one previously seen for Android, due to security restrictions imposed by Apple.

Don't worry, though, all is not lost: you can try to recover messages of your interest by restoring a backup prior to the date they were deleted. I know, it's a bit drastic as a solution, but, at the moment, it's the only one possible! I'll explain how to implement this procedure in one of the next chapters of this guide. 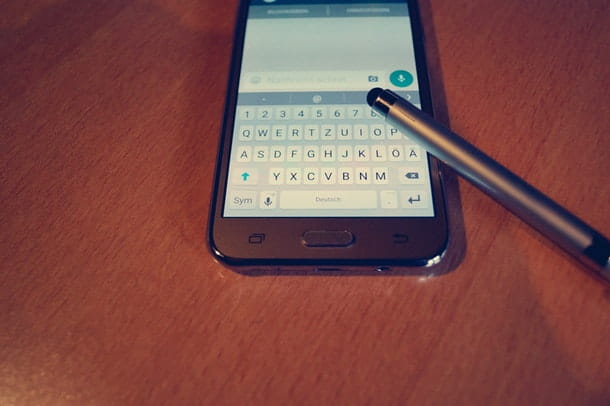 Have you been unable to implement the steps I described above because of some problems with the apps I suggested, or do you have an iPhone and you don't have the ability to use apps that allow you to complete the task you set yourself?

Do not throw in the towel, there is still a chance of success: you can try to recover deleted WhatsApp messages from the sender without an app, restoring a backup prior to the date the messages were deleted.

This way, you certainly won't have the chance to read the messages sent and immediately afterwards deleted by the sender himself (i.e. the ones you've never actually read), however the chances of recovering old deleted messages are quite high.

Again, however, remember that restoring messages that have been deliberately deleted by the sender can be a bad practice and in some cases, lead to serious consequences. I will not be held responsible in any way for the incorrect use of the procedures I am about to explain to you. 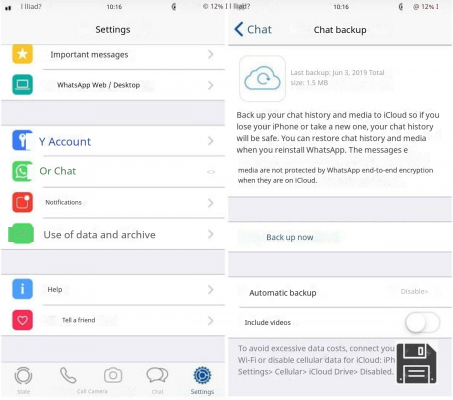 The first thing you need to do to try to restore whatsapp messages deleted by the sender on Android via backup is to check that the date of the last useful backup is earlier than the date when the messages were deleted.

Please note that backups, depending on the chosen setting, can be made on a daily, weekly or monthly basis: depending on this detail, the chances of achieving the goal successfully increase or decrease.

However, to find out the date of WhatsApp's last backups, launch the app, tap the button (⋮) in the upper right corner and tap the Settings item in the menu that appears.

Next, access the Chat and Backup sections of the chats and check the dates corresponding to the Google Drive and Local entries.

If the date of the last backup made on Google Drive is earlier than the date when the messages were deleted, follow the steps below to restore the backup in question (remember that, at the end of the procedure, messages received after the backup will be lost).

Then, install the app again from the Play Store and perform the initial configuration procedure: start WhatsApp, tap the Next button and enter, when prompted, the phone number and the confirmation code obtained by SMS.

After verification, the last backup should be recognized automatically. To accept the message restore, press the Restore button and you're done.

If the date of the last backup made with Google Drive is not "useful" for the purpose, then you can try to restore an old local backup: the steps are slightly more complex than those seen previously but, in this case, you have the possibility to recover also the messages deleted in the old date.

Remember that, once the backup recovery is complete, all messages after the backup's creation date will be lost, forever.

So, if you're going to proceed, launch a file management app, such as Google Files (pre-installed on newer versions of Android), tap on the Browse tab (below) and go to the Browse memory locationWhatsAppDatabases, or SD CardWhatsAppDatabases, if you are using a device with a microSD card.

In the folder in question, you will find a file named msgstore.db.crypt12 and a series of files named similar to msgstore-[data].1.db.crypt12. The first contains the last local backup made by WhatsApp, while the others contain the oldest backups.

Once you have completed the backup operations, uninstall WhatsApp as I explained earlier and remove it from the apps that have access to Google Drive if necessary, you will be able to "force" the local backup restore during the initial setup.

Then, connect to the Google Drive permissions management website and log into your Google account (the same one you set up WhatsApp backups on), if necessary.

We're almost there! At this point, all you have to do is install WhatsApp again from the Play Store, follow the initial service configuration procedure and, once the number verification is complete, answer yes to the backup restore request in memory.

For additional information about recovering WhatsApp backups, I invite you to read the tutorial dedicated to the topic, in which I explained everything in detail.

If you need to "back up" WhatsApp for iOS to an earlier date than when you deleted the messages you are interested in, you can restore a previous backup of those messages.

Unlike what you see on Android, however, iPhone and iPad backups are not stored in device memory, but only on iCloud: unfortunately, this eliminates the possibility to choose the exact date of the backup to restore.

Depending on the settings you choose, backups are made on a daily, weekly or monthly basis, and depending on this detail, the chances of successfully recovering deleted sender messages increase (or decrease).

To find out the date of WhatsApp's last backup, launch the app in question, tap on the Settings tab (bottom right) and then tap on the Chat and Chat Backup items: you can find the information you are interested in next to Last Backup.

If the backup date was earlier than the date on which the message you are interested in was deleted, all you have to do is restore the backup in question by deleting and installing the app again. Remember that all messages received after the backup date will be permanently deleted.

However, to proceed, tap on the WhatsApp icon until it starts "shaking", then tap on the x in the upper left corner and press the Delete button to confirm the deletion of the app from the operating system.

After that, download WhatsApp from the App Store, launch the application, and when prompted, enter your phone number and the code you received via SMS to complete the initial setup process.

If everything went smoothly, once the number verification is complete, WhatsApp should recognize the iCloud backup automatically, asking you to restore old chats: when it does, tap the Restore Chat History button to finish it all.

If your iCloud backup no longer contains the messages you want to retrieve, you can try to retrieve them by restoring your iPhone from iTunes, using a backup created prior to the message deletion date.

I realise that this is a fairly drastic alternative but, at the moment, it's the only one you have available (among other things, the result is not guaranteed at all). However, if you still think it's worth a try, you can restore your phone by following the instructions I've described in this tutorial.

Compilation of frequently asked questions that our users have sent us and that our experts have answered.

How to recover WhatsApp chats

How to Recover Delete WhatsApp Messages

How to recover deleted WhatsApp messages without an Android backup

How to Recover Deleted WhatsApp Messages

How to recover deleted messages from WhatsApp

How to Recover WhatsApp Conversations