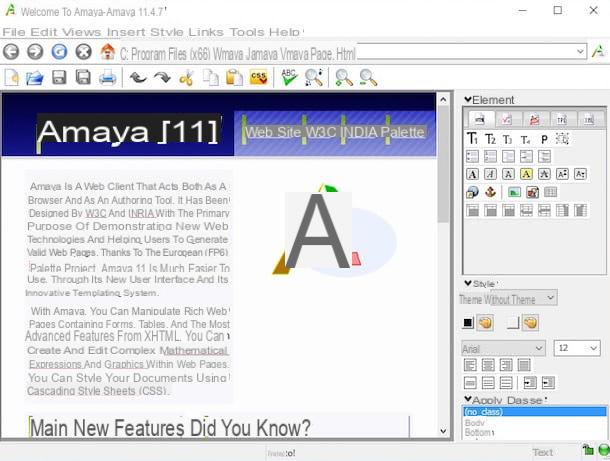 Until now, in this blog, we have always talked about how to make websites with CMS programs or with web platforms that offer tools called distributed CMS.
With the word CMS it indicates a way of creating web pages in modules, without writing html programming code, in which the difficulty is more managerial and organizational rather than technical (see how to try CMS software for free).

The best web applications to create websites, listed in another article, are instead Facilitated and guided CMS, very suitable for those who have no intention of wasting time understanding what lies behind and which allow you to design the pages of a website simply by dragging and customizing elements.

Important update, the heir to NVU that has not been updated since 2005 is the free program to build Kompozer websites.

But to create a website, the most used method by professional webmasters and by those who prefer not to have guided interfaces, easy to use but which limit the freedom of action, is to use software in which you must also understand the code and the language of programming.
Among them, the best and the most famous is Adobe Dreamweaver while the most common on PCs is (better to say it was) Microsoft FrontPage, included in the Office suite up to and including the 2007 version.
Dreamweaver, however, is a commercial program that has its cost while FrontPage is no longer developed and it was certainly not a pride of Microsoft as it is a bit weak and not optimizing.
For the record, Frontpage has been replaced with tougher to use programs like Microsoft Office SharePoint Designer 2007, Microsoft Expression Web Designer, and Visual Studio 2005.

Professional programmers will never admit that to make a nice site, personal or corporate, it is no longer necessary to study programming codes even if, in creating web pages, whatever software you use, a minimum of study of the basic concepts is absolutely advisable.
Rather, without being a programmer, it is almost impossible to be able to create dynamic web applications or sites, but this is a discourse that is not necessary to enter.

After these premises, in this post, I must report another programabsolutely similar and up to DreamWeaver for functionality and capacity, which is also much easier to use for those approaching this world for the first time.

NVU (pronounced N-View) is a software developed by the same authors of Mozilla Firefox and is completely opensource, therefore free and free that works both on Windows than on Linux and MAC.

NVU allows you to design a website with a graphical interface and a very simple editor to use, which directly shows how it is displayed and can be used even without knowing the programming code.
It supports file management via FTP, html, xml and php languages, allows you to edit and correct JavaScript, has a CSS editor and powerful support for creating tables and templates from scratch.
The most important thing that helps newbies and those who are learning is the editor based on the Drag & FDrop technique, ie the dragging of already preconfigured elements.
The modification of each single web page is displayed in tabs as if it were a browser for surfing the internet and therefore allows you to keep multiple tabs open.

NVU is also available as a portable application, which requires no installation and can be copied to a USB stick.

Another Opensource program for creating websites with a graphic editor is called Amaya and is distributed by the international organization for the validation of the html code of websites. the W3C.
This is certainly a guarantee symbol for designing and creating web pages without being experts, with the use of a user friendly graphic interface while also maintaining quality and technical optimization.

add a comment of NVU, the best free program for designing web pages and creating websites