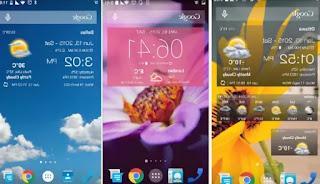 One of the best features of an Android mobile is that of widget for the main screen, so you always have interactive information or quick buttons under control. Widgets are applications that are embedded on the phone screen and allow a quick access to its features. You can then hold a photo frame showing a slideshow of photos, music player controls, a weather clock, a button that enables the flashlight, or a news aggregator that updates automatically.

Many Android apps also include their own widgets which can be quickly added to the screen by tapping and holding on an empty spot. The option that allows you to browse the widgets available and installed on your phone should then appear, to be added just by touching them and dragging them to the part of the screen where you want to see them. Widgets do not open like normal general menu applications, they are activated by pressing the home screen button and do not open new windows, they immediately activate the function.

In this article we see what they are the best free download widgets for Huawei, Motorola, Samsung, LG mobile phones e all Android phones.


Before starting with the list it must be said that Android Widgets should always be used without exaggerating, since they take up memory and can slow down the performance of older or less powerful smartphones. It should also be noted that widgets take up space on the phone's desktop and that generally applications with widgets cannot be moved to the SD card.

Best free widgets to download and install on Android

1) volume control to manage all volumes, including that of the ringtone and that of the music, quickly.

2) Battery HD to always have an eye on the status of battery charge in a drawing and activate the quick settings or battery usage view.
For the battery there is also Battery Widget, the lightest and most minimal.

3) Widget with ON / OFF switches and control buttons to quickly activate, with a touch, wifi, GPS, bluetooth, to adjust the brightness, to synchronize data, to activate the airplane mode and to mute or vibrate. Many Android smartphones include the energy saving control which is similar, but not customizable.

4) ColorNote Notepad Notes is a widget to attack colorful post-its to be displayed on the Android screen with notes and to-do lists.

6) The Stats Monitor Widget to see the status of the phone: memory, CPU usage, network usage and other statistics.

8) Speed ​​Dial Widget it is used to set up some contacts and call them with a touch or send them messages.
Another Widget with favorite contacts is Contacts widget.

10 ) Flashlight is the best application to have different types of flashlights on android phone which also has widget for activate the flashlight with a touch.

11 ) Transparent MEteo is a widget with digital clock, weather and other information, with nice and clean graphics.
Very elegant it is also Another Widget which updates the weather forecast automatically and displays the clock for quick access to the alarm.


12 ) Moon Widget show the Moon and the phases of the moon on the phone screen.

13 ) Weather Forecast is one of the best widgets to always have the weather forecast on your mobile phone, always in view, with indications on the weather and temperature, if there is sun or rain.

14 ) Simple Weather Widget is a widget with tomorrow's weather forecast and temperatures for every city in the world, clean, clear and without ads.

15 ) schedule show notifications and data about the last calls made or lost, new SMS, and calendar events.

16 ) Google News is the best feed reader with widget to read news directly on the screen of your Android phone.
Those who used Google Reader can use the widget instead Feedly to be placed directly in full screen.

17 ) Plume is the best widget for Android that can show the latest news and updates from your contacts on Twitter and Facebook.

18 ) DEvice info is the widget that indicates le on a screen system information with percentages and amounts on available RAM memory, processor usage, internal memory and SD space, battery, system cache and more.

19) In another article, Widgets for check the remaining credit and internet thresholds of a rechargeable one.
Data Usage is a widget to always have under control the traffic thresholds of the data connection.

20 ) Chronus is a super customizable widget that allows you to see a lot of information on the home and lock screen, from notifications to the time, weather and news and much more.

21 ) dimmer is a widget that allows you to change the brightness of the screen, to an extent even higher than the minimum provided by Android. Ideal for reading your mobile at night in bed.

22 ) WiFi Manager is the Android screen control for managing WiFi networks with many options to search and select the network to connect or disconnect to.

24 ) Dialer Widget is a widget with numeric keypad and address book to make phone calls quickly from the main screen.

25 ) Elixir is a collection of customizable buttons that can be added to the screen to do things like turn wifi, bluetooth, cellular data, location, airplane mode, sync, and more on and off.

28 ) EAS: Easy App Switcher is a widget to create a fast application launcher.

29) Among the most popular apps with Widgets we remember Netflix, to see the movies in a box on the screen, then also Shazam, to recognize a song on the fly with the quick button, then the Google translator, VLC for video controls, Whatsapp for received messages and quickly write to selected contacts.

30 ) Hotspot Toggle to quickly activate and deactivate the hotspot function

31 ) Sofascore, the app to follow the results of football leagues, has its own widget to always keep an eye on the results in real time.

32) Don't forget that all Android phones include Widgets in Gmail to see emails, of Google for Google Assistant information, di Google Maps, to quickly start driving to a specific destination (such as at home), Play Music to start playing music.

34) Finally, in another article, the best apps to create custom widgets on android of any kind, as you wish.


Not for the widget, but if you like this article you can install l'app Android bestresourcesnow

add a comment of Best Android widgets for smartphone screen