App for Hotspot, for better management of the internet connection (Android and iPhone) 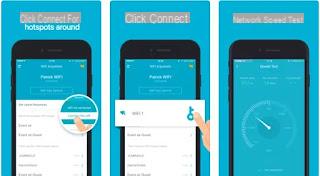 Virtually all smartphones come with built-in hotspot functionality. To create a hostspot on an Android smartphone just go to the Network settings to find the options that activate thehotspot o tethering while to activate the hotspot on the iPhone just open the General Settings.
A hotspot is any access point to an internet connection. On smartphones, the Hotspot option allows you to share the data connection of the phone in wifi to connect other devices that have no connection to the internet. This function is very useful to have a portable connection to use on your PC or to connect to the internet using the data connection of a friend's phone, if our friend has run out of Giga or does not take well.

In this article we see the best apps to use to improve connection when connecting to public hotspot and to add functionality, only on Android, to the Hotspot option of the smartphone in order to transform the smartphone into a real router. For example, it is possible to control the signal, limit data transfer to who connects, transform the Android smartphone into a Wifi repeater or share a VPN connection or other possibilities that are not available in the default Android and iOS hotspot.
For those who often go away from home and want to make the most of open wifi networks and internet access points, we see here the best apps to use Hotspot on Android, on Samsung, Huawei, Xiaomi and others smartphones and also on the iPhone.

Speedify (Android and iPhone) is one of the smartest VPN apps on smartphones, which we have already reported in the past in the guide on how to optimize the connection by combining wifi and data. Using channel bonding technology, when you are in a place where you can connect to multiple wifi networks or multiple hotspots, Speedify automatically finds the fastest way to connect to the internet so that you receive the best possible bandwidth. Speedify also protects the connection through its VPN so that even if you connect to a public hotspot, you don't risk being spied on by the network operator.
Speedify is free for 5 GB of traffic per month, after which you need to pay for the premium service, which starts at $ 4 per month.

OpenSignal (Android and iPhone) is the app that helps to find the best signal in any area and that reports all the nearby hotspots that you can connect to to surf the internet. Opensignal is one of the best apps to check the speed and latency of data connections and also provides the map of 3G and 4G coverage in the city for all operators.

Wi-Fi Anywhere (Android is one of the best apps to find free Wifi networks around, nearby hotspots open or not, with an indication of the security level of the networks detected.
An interesting feature is the ability to detect all devices connected to a hotspot, including the name, brand, IP address and type of the device, which lets you know who else is using that network. This is very useful on iPhone and Android to control who is connecting to your phone and to limit the data transferred, if we have created the hotspot ourselves.

NetShare (for Android) is one of the best Wi-Fi hotspot apps that allows you to share a Wi-Fi connection with others by creating a hotspot. A Wi-Fi hotspot can therefore be created even when we are connected to another Wi-Fi hotspot, thus allowing other devices such as Chromecast and smartphones to enjoy better bandwidth. Simply put, you can now share a Wi-Fi connection with others without giving them the password or access to the router. You can also turn your smartphone into a wifi repeater and greatly extend the signal range of the router. All data is encrypted and protected via the VPN connection.

If we connect to a public or restaurant hotspot, it is possible to use the Wifi Analyzer for Android to check if there are other users and how full that network is. You can then find out the cause of a slow connection if it is congested with too many accesses. Wifi analyzer it also allows you to search all hotspots and channels to find the one that is the least congested.
This is one of the best apps for compare WiFi networks to find the best one (WiFi Analyzers)

App for Hotspot, for better management of the internet connection (Android and iPhone)

Audio Video App for Hotspot, for better management of the internet connection (Android and iPhone)
Best Skin Packs to turn Windows into other systems ❯

add a comment of App for Hotspot, for better management of the internet connection (Android and iPhone)