Tumblr is a social network and microblogging platform that, similar to Instagram, focuses on visual content. Despite being a long-standing social network, Tumblr has been able to adapt to the trends of the Web and still remains a widely used platform, frequented by a mainly young audience.

Born in 2007, acquired by Yahoo in 2013 and originally conceived as a platform for the easy and immediate creation of a personal blog in which to write textual content, insert links and write quotes, Tumblr has then undergone several improvements in an attempt to keep up with times. Also available as an application for Android and iOS, Tumblr has now become a social network in which images, drawings and above all GIFs are definitely the most popular.

There is still the possibility of creating a personal blog and writing one's thoughts in textual form, but it must be specified that there is a clear difference between the Tumblr blogs, called tumblelog, and the classic blogs and / or websites.

Blogs on Tumblr have severe limitations in terms of customization; on the other hand, however, you can easily integrate all the multimedia content you want from Tumblr and other social networks. Tumblr is also aesthetically characterized by an atypical look that I would define a bit retro. On balance then, Tumblr is configured more as a social network in which the aim is to have a personal space in which to share multimedia elements of interest and, every now and then, write one's thoughts: a sort of evolution of the secret diary, in short..

In addition to being accessible from PCs and Macs from desktop browsers by logging into its website, Tumblr is also available via apps for Android and iOS. In addition to talking to you in detail about how Tumblr works on desktop, in the course of this guide I'll talk about how to install and use the application for mobile devices.


Now that you have a general understanding of what Tumblr is and what its characteristics are, we can move on to the more specific part of this tutorial, in which I explain how to use it. 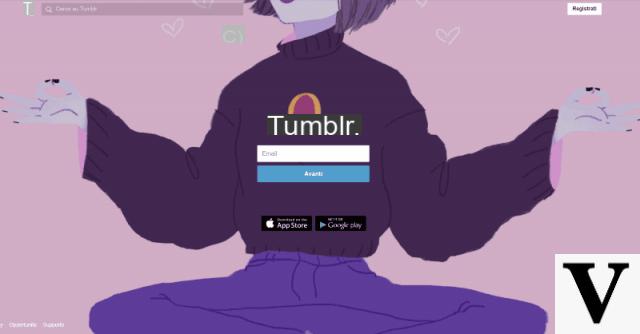 To understand in detail how Tumblr works, you must first proceed by registering with the social network, thus being able to use all its features.

Then go to the official website of the social network and register for free by pressing the button Start that you find in the center of the Home Page. For registration purposes, then fill out the form that is proposed to you indicating yours email address Password and username you want to use and continue by pressing the button Subscribe. You will then have to indicate your age and carry out the security check in order to finally complete the registration to Tumblr.

In case you have already previously registered on the social network, once you have connected to the official Tumblr website you will have to press the button Log in instead of the button Start.

At the first access to the social network you will be asked to choose at least 5 blogs to follow, choosing on the basis of what your interests are. Then click on the thematic blogs presented and press the button Next. To complete the verification of your account you will then need to click on the confirmation link that will have been sent to you by email.

Once logged in, you will first be able to view the Dashboard, home screen relating to the stream of multimedia content published by other users. Through this section you can then view the posts published by the blogs you follow and interact with them. Also through the dashboard you can also start publishing content on your blog.

There are in fact 7 types of posts that you can share on your blog created on Tumblr; you can see the post creation tools directly at the top of the Dashboard. 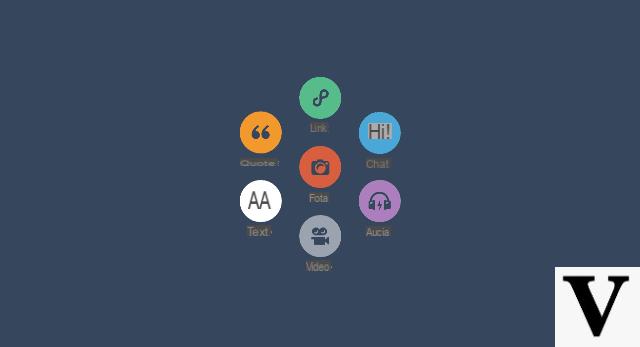 Via the button Text you can write a post on your Tumblr blog and format it aesthetically, using the button Gallery o Video you can publish multimedia content by uploading it from your computer or sharing it through its link on the Internet. Then there are the button Quote e Chat which allow you to write textual content with singular formatting, while the button Link e Audio respectively allow you to create a new post on your Tumblr blog by inserting a URL or a music file.

As for the interaction with other Tumblr users, through the Dashboard it is possible to view all the contents of the users followed and suggested, alternatively, search for a desired content using the search engine located at the top. 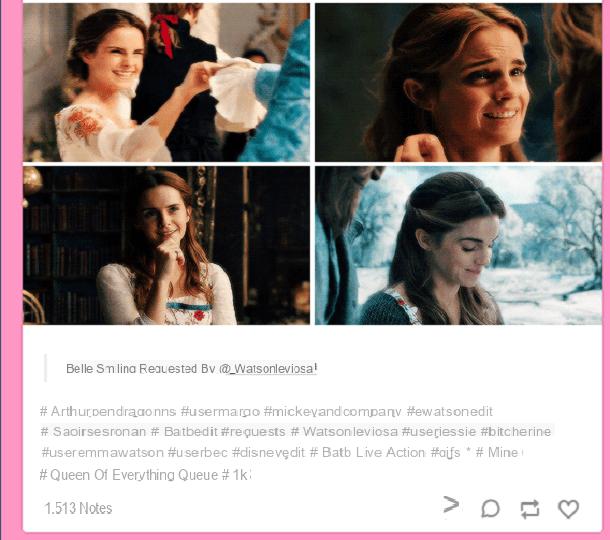 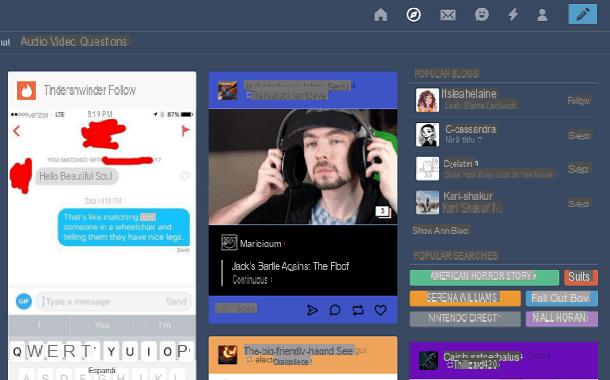 The other noteworthy features of Tumblr are visible by clicking on the buttons present in the top bar of the social network. By clicking on the compass you will be able to view another section of Tumblr full of content posted by other users, similar to the Dashboard. Unlike the latter, however, it will be a view exclusively linked to the trending topics and related thematic contents of greater prominence.

Also on Tumblr there are the messaging feature rankings of the most popular social networks: by clicking the button with the envelope symbol you can send private messages to users. If, on the other hand, you want to personalize your blog more, before interacting with other users and publishing content, I suggest you click on the button with the symbol of a little man and then click on your username.

You will then be able to access the Tumblr section exclusively dedicated to your blog and, in addition to having the tools for publishing content I have already told you about, you can customize your blog aesthetically. To do this, click on the entry Edit Graphics to modify some basic aesthetic elements of your Tumblelog.

How Tumblr works on Android and iOS 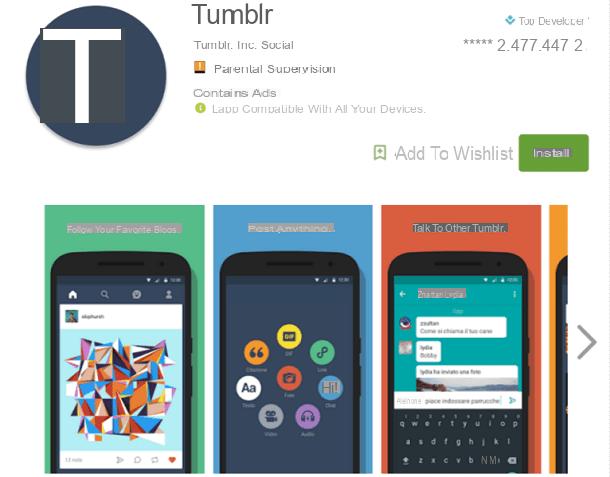 As I explained to you in the introduction of this guide, Tumblr is also available for use via a free application for Android and iOS. You can also take advantage of all the features I told you about by downloading the app on the mobile device you usually use.

To start using Tumblr on Android and iOS you must therefore first download the application to the memory of your device. If you have a smartphone with an Android operating system, you will need to go to the Google PlayStore (it is the app with the symbol of a colored flag). Using the search engine located at the top, type then Tumblr and press pulsating Search from the smartphone keyboard. Once you have located the Tumblr application in the PlayStore, click on the button Install and then on the button Accept. Once the installation is complete, click on the button apri to start the application of this social network.

Do you have an iPhone and would like to know how to proceed to download the app? In this case you have to go to the iOS App Store and through the search engine of the Apple virtual store, search for the application. Then type Tumblr in the search engine and confirm the desire to search for the app by pressing the button Search from the keyboard. Once you have identified the app, on iOS you will have to install it by pressing the button Get and then Install (or by pressing your finger on the Touch ID to install it, depending on the options you have activated on your device).

On both devices, to start using Tumblr you will need to log in with your account: then press the button Log in and log in by typing your details. Once logged in, the Dashboard will be shown to you first and you will be able to interact with the posts you will see using the buttons whose functions I explained to you in the previous lines.

The Tumblr application on Android and iOS has the exact same functionality as the desktop version accessible via the website. What changes is only the position of some buttons: to publish multimedia elements on your blog you will have to press the button with the pencil symbol located down. A circular menu will then open in which you can see the buttons for sharing GIF, Link, Chat, Quote, Audio, Video, Text, which features are identical to the web version of the social network.

Audio Video How Tumblr works
How the Powerline works ❯