GPU Overclocking: Guide to Boosting Your Graphics Card with Afterburner 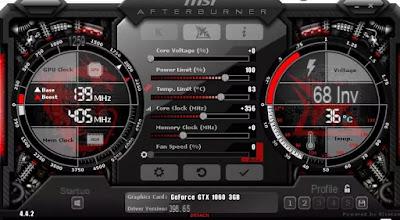 Having a dedicated graphics card, even if it is not the latest model, it is possible to exploit it to enhance the computer by pushing its processor to maximum power, with an overclocking procedure.
Overclocking a processor means increasing its energy and its computing capacity which the manufacturer keeps lower for a matter of safety and energy saving.
Overclock the GPU (i.e. the graphics card) is a procedure allowed by manufacturers that anyone can do on their computer without too much difficulty, using a program that does not require special knowledge or advanced computer skills.
While the risk is very low and almost zero, overclocking can, theoretically, damage the graphics card processor or other components in the computer.
The important thing is to proceed with caution, increasing the power step by step, without immediately going to the maximum.

In this article we see how to overclock the computer's GPU to increase its power using the program Afterburner for Windows which works on both NVIDIA video cards and AMD GPUs.
Overclocking is recommended on a fixed desktop PC, but not recommended on laptops that may end up generating too much heat and consuming too much power.
This graphics card overclocking guide therefore focuses on a desktop PC running Windows, which has one NVIDIA or AMD GPU (not other integrated systems such as those from Intel).

1) Overclocking programs to use
The program we're going to use is MSI Afterburner, free and compatible with any NVIDIA or AMD GPU.
To measure performance we should also have a benchmark program on hand, such as Unigine Heaven, to do the performance comparison before, during and after.
GPU-Z is another program to keep open during overclocking to measure temperature, fan speed and graphics card power in real time.

2) Know exactly what graphics card we have in the PC
Each graphics card is different: in its basic NVIDIA or AMD design, in the customizations added by manufacturers like ASUS, Gigabyte or Sapphire, in the generation and then in the small variations and imperfections of the manufacturing process itself.
In addition, the results of overclocking and the maximum performance of the same graphics card may differ from one computer to another depending on the hardware configuration.
To know everything about computer hardware you can use a program like Speccy, free, simple and precise.
Don't forget to update the graphics card driver to the latest version, which is always very important to maintain high performance.

3) Run the benchmark before overclocking
Before we begin, we need to see where we are starting from and then use the benchmark tool mentioned in point 1, measuring the performance of the GPU when it is pushed to 100% of its current possibilities.
Keep GPU-Z open to check processor usage in real time even during the benchmark.
Save the values ​​shown or write them down somewhere.

4) Open MSI Afterburner to boost GPU clock and voltage
Afterburner's overclocking tool has an interface that looks like the odometer in a car video game, which makes it look very sophisticated.
What interests us for a video card overclock are the values ​​of the core clock which is the speed measured in MHz and the electric voltage (Core Voltage), measured in Volts that the board is able to absorb from the PC power supply.
In the latest version of Afterburner you need to press the gear icon to open the program options and activate the voltage control unlock.
Randomly changing any of these values ​​can make the GPU and computer unstable, so it's important to proceed step by step and gently raise the speed and voltage until stability issues are encountered, then go back and stabilize on a stable maximum value.

Change the clock speed first, using the control in the center, going to +10 or +20.
Press Apply and notice that in GPU-Z the GPU-Clock value grows and is higher than Default Clock, which is the initial speed.

If everything went well and there were no problems, you can rerun the benchmark to see if, by pushing the GPU to the maximum now, the computer freezes, crashes.
Also note if visual artifacts appear in the benchmark graphics or black dots or colored dots that are not good.
If there is none of this, you can try to push the GPU clock forward another 10 points, otherwise you have to move it back and retry the benchmark until the performance is stable and error-free.

As mentioned above, it is possible too increase the voltage of the GPU to allow clock values ​​higher than the initial limit by increasing the Core Voltage value which is in percentage.
Raise it by 5% and then run the benchmark to verify that there is no instability.
Increasing the voltage also causes an increase in heat which must be kept under control.
The Temp limit value in Afterburner tells us that when the graphics card reaches that temperature the PC will shut down for safety.
This value can be increased, but it is not recommended at all.

The process of increasing the clock and voltage values ​​slowly can be repeated again and then measuring the performance with the benchmark, until you see the first problems.
At that point, go back to the previous values, make sure the temperature doesn't rise too much by using the benchmark again and stabilize overclocking in Afterburner.
The end result should be a performance improvement of around 10% or possibly more depending on your PC configuration.

With Afterburner, it is also possible to increase the GPU memory clock speed, but it is not recommended as performance will not significantly increase.
Also, Afterburner can manipulate the fan speed on the GPU, which by default is in "auto" mode which is fine.
The graphics card will automatically increase or decrease the speed of the cooling fans when its temperature sensors detect the need to do so.

Once you have finished overclocking in Afterburner, look at the lock at the bottom right that needs to be unlocked and then click on the disk to save the configuration and then click one of the numbers to save the profile.
In case of problems, you can always press the key that restores the initial values, the one with the arrow that goes back.

GPU Overclocking: Guide to Boosting Your Graphics Card with Afterburner

add a comment of GPU Overclocking: Guide to Boosting Your Graphics Card with Afterburner