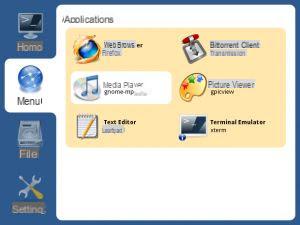 In addition to Chrome OS there are others as well Linux-based portable systems which can be started from a USB stick, with the basic functionality for most users: web browsing, music and video playback, photo management and some games.
These operating systems are almost browsers and can also be used as programs on the main Windows PC to try them out or to use them in order to launch your favorite web applications or even normal programs in reduced versions on the fly.
Even on a old pc could be ideal to get it back to working as it should.

1) Puppy Linux it cannot be left out of this list as I wrote an extensive article to it over a year ago.
Puppy Linux is a full-featured operating system, with a normal Windows-like desktop, with all the programs to do any job, and that starts up in seconds with unrivaled speed.
Since it can also be installed on a 128 MB USB stick, it is worth always keeping Puppy in the drawer because it becomes both a way to carry around the customized settings so that they can be used on any computer, and an emergency system to restore Windows to the case it no longer lights up.
They are also ideal for continuing to use an old computer that with these lightweight systems will return to full efficiency.

1 TO) MacPup based on Puppy Linux, but much nicer to look at.

2) Lubuntu uses the Lightweight X11 Desktop Environment (LXDE) to provide a basic graphical interface.
While not the prettiest distribution here, Lubuntu is fast and functional and uses Ubuntu as a base, the system that best of all offers compatibility and full access to Canonical's repositories.

3) Tail and anonymous operating systems, which leave no trace on the computer after use.

4) ElementaryOS, the easiest Linux system, beautiful and with very fast performance, also ideal for old and not very powerful PCs.

5) Pixel, the lightest operating system, easy to use, developed by the creators of the Raspberry PI.

8) Slitaz it's a 30MB operating system and it really looks amazing when you think that programs like ITunes are three times bigger in size.
The smallest of the systems, it can be installed on a USB stick and becomes a magnificent portable system.

10 ) Prime OS is just Android for PC, an opensource system ideal to use on older laptops or even the new one if you are tired of Windows and want a desktop interface similar to that of a tablet or smartphone.
Prime OS can be installed, if you want to try it, on a USB drive, on an SSD card, on the hard disk of your computer or you can boot it from cd.

11 ) Bodhi linux is based on the famous Ubuntu Linux, lightened and reduced.
This system is developed and updated by very active developers still in 2019, so at the moment reliable and promising.

12 ) SLAX is a 200MB Linux version based on the Slackware distribution.
Slax is instead the most complete of this list because you can install all the programs you want.
It is therefore possible create your own portable operating system with Slax in a simple way and in full freedom.