Best AR games of augmented reality for iPhone and Android 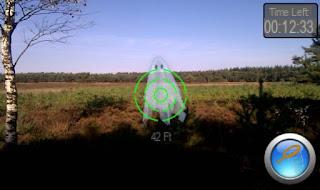 Pokemon Go it immediately became the most played game in the world, not only because it talks about the irresistible Pokemon, but also because it is based on augmented reality. As we now well know, playing with augmented reality means playing in the real world, seeing it interactive and different through the smartphone camera. It so happens that the Pokemon appear on the street framed by the phone, ready to be captured.
For those who like the genre and want to know what other games like Pokemon GO exist and are playable on Android smartphones and iPhones, we see on this page the best AR games, therefore based on the augmented reality, surprising and very original. All you need is one Android smartphone or iPhone, an internet connection, a spare battery, a desire to move, and some time.

1) Pokemon Go was the big hit of 2016, a game in which you have to move around the real world looking for the Pokemon that appear on the screen and have to be caught.

2) Ingress per iPhone e Android is the game that can be considered its predecessor, made by Niantic Labs, the same as Pokemon GO. Ingress was the first AR game that transforms the world into a globally competitive game full of mystery and intrigue. It is played in teams, with a challenge between the enlightened who seek the power of a new energy discovered by scientists and the resistance, which instead tries to defend humanity against this force. The real world is then modified in the game where you have to discover mysterious artifacts, acquire territories and defend them against opposing teams. Ingress's story evolves every day you play and there are thousands of mysteries that must be solved to complete the mission.

3) Harry Potter Wizards Unite takes us into the world of Harry Potter via augmented reality. The game is from the same developers as Pokemon Go, much more realistic and more immersive.

4) Zombies, Run! is a very popular iPhone and Android app, not so much as a game, but as a training and fitness application. Basically it forces you to run and run away from zombies, which are a sure incentive to keep up the pace and push harder than you would with other apps. Zombies, Run is an immersive audio game that transports the runner to a world full of zombies to escape by running (also works on a treadmill). If you are immersed in the idea of ​​a world full of zombies, the chilling screams of the undead are a very strong urge to run harder and get fit while having fun.

5) SpecTrek (Android only) is a ghost game, where you play as Ghostbusters, to catch the ghosts that appear before us in augmented reality. The player has to search and find these ghosts using the GPS and the phone's camera to catch them, kind of like they do in Pokemon GO.

6) Jurassic World Alive for Android and for iPhone it's the dinosaur game. Using your phone's camera, you can project dinosaurs onto the screen to capture, similar to Pokemon Go. Once you have collected dinosaurs, you can go to the arena and have the dinosaur pack fight against other players. Jurassic World Alive is free, but you can also pay for a subscription to unlock special perks.

7) The Walking Dead: Our World for Android and iPhone is the game to experience a Zombie apocalypse firsthand. The Walking Dead: Our World uses a similar concept to Pokemon Go, where instead of catching cute creatures, you have to shoot brain-eating zombies. Based on the popular TV show and comic series, the survival AR game requires you to get out of the house and explore the streets to discover valuables and rescue survivors.

8) AR Basketball for iPhone and AR Dunk for Android they are two simple, very nice games that allow you to shoot a basket by framing the camera and viewing the basket virtually.

9) Knightfall AR for Android and for iPhone it is a defense game of the tower defense genre, in which it is necessary to build towers to defend against enemy attacks.

10 ) My Tamagotchi Forever per Android e iPhone is the game where to heal the Tamagotchi pet, with mounts of virtual reality components.

11 ) Brickscape (iPhone) is a puzzle game where you have to understand a step out of the box for a particular block, moving the various bricks that obstruct its path. You can play Brickscape as normal or activate AR mode to bring bricks to life.

12 ) Stack AR for iPhone is a puzzle game where you have to stack the blocks as high as possible by dropping them at the right time so that they are correctly aligned. It can be played in a normal 2D mode or in augmented reality.

13 ) Smash Tanks! for iPhone is an AR tank battle board game. To aim, you have to drag the arrow of the bullet and shoot at the weak points of the enemy. You can play against the computer or against another player.

14 ) Kings of Pool for Android and for iPhone is the classic augmented reality pool game, very nice, even with a multiplayer mode.

15 ) Ghost 'n Guns for Android and for iPhone it is an alien first-person shooter where you frame the surrounding environment with the camera and see enemies appear on the screen.

16 ) Angry Birds AR: Isle of Pigs for iPhone is the AR version of the game of angry birds to throw with the slingshot to destroy the castle of the evil pigs that appear on the screen when you frame any environment with the camera, as if they were real.

17 ) AR Runner for iPhone it can be played indoors or outdoors and the goal is to complete challenges such as running in circles as quickly as possible, seeing the checkpoints on the path where you go for a run.

18 ) AR Robot, for iPhone is an action game where you fight with a Robot avatar. You can organize a fight anywhere in your home and start the battle. You can also play against friends.

19 ) The BirdCage, for iPhone, is one of the best and most beautiful AR games, a puzzle game where the goal is to unlock the bird cage and free the bird. To solve a puzzle, place the virtual bird cage on the floor of our room at home or on a desk (framing the desk with the camera) and then inspect the surrounding environment to find the solution. I love the originality of the game that makes you think outside the box.

Best AR games of augmented reality for iPhone and Android