Play on TV with Chromecast, best games with other people too 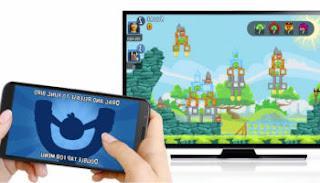 The times of the Nintendo Wii are really past because today you can play interactively with friends in front of the TV simply using your smartphone (Android or iPhone) as a controller.
In fact, if we have a Google Chromecast device (currently on sale there is the Chromecast 2), it is possible to use it as if it were a video game console by projecting the game from the PC or mobile phone on the TV screen and also playing in several people together, each with his smartphone in hand.
This is possible thanks to the wifi bridge that is created with the Chromecast that works as a transmitter of anything you see on your computer or smartphone.
You can play the games of an Android phone on TV by projecting the smartphone screen directly or you can use the video games designed and made specially to work with the Chromecast, characterized by the possibility of being able to play with friends all together like you did with the Wii.

First of all it is necessary install games designed for the Chromecast which are available as applications for both Android and iPhone.
find games you have to install the application Google Home on your phone (from the Google Play for Android and iTunes for iPhone stores) and tap on Find App.
You can then search for recommended popular games or scroll down the page until you find the button to see all the apps, including the games category.
You can also search for Chromecast games from the Chromecast app web page where they will be found not only games for iPhone and Android but also for Chrome and the PC.

Among the best games for Chromecast currently available are:


Do not forget the games of Airconsole to Play on PC or TV with smartphone (like Nintendo Switch).

To play a game on TV with these Chromecast games, you must first install the game app on the Android smartphone or iPhone, then, after launching the game, press the Cast button, which is the one with the Chromecast app icon. The game will then be projected on the TV while the phone will become like a joystick or remote control to play. If we play with other people, all players just need to connect to the same Chromecast to join the game.

For any party or meeting at home and even at Christmas and New Year, the Chromecast can become a very pleasant pastime not only to see a movie, but also to play all together.

Play on TV with Chromecast, best games with other people too

Audio Video Play on TV with Chromecast, best games with other people too
Best Android smartphone from 100 to 1500 Euro (2021) ❯

add a comment of Play on TV with Chromecast, best games with other people too