Guide and tricks Agar.io, the mania game for Android, iPhone and browser 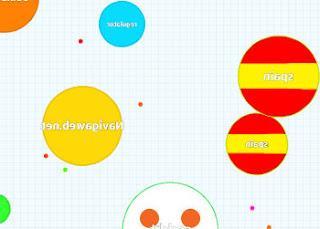 A new game is literally becoming one mania all over the world, especially after Miniclip has released the mobile version for iPhone and for Android smartphones and tablets (as we will see, you can also play on Windows Phone). After playing it for a few days, I must say that I have never seen a game so simple and so engaging and fun, where one game leads to another and you can never stop.
It is Agar.io, an multiplayer game where you check one small ball that eats other smaller balls avoiding being swallowed by the bigger ones.
The circular sphere is like a fish that eats plankton and moves in the sea among other fish, which may be smaller or even larger.
Each sphere is a player who moves to eat the crumbs of food to grow, escaping from the larger spheres and trying, at the same time, to swallow the smaller ones to incorporate and absorb them in order to get bigger and bigger, score more points and climb in Ranking.
Whoever is better or luckier can become the biggest ball at that moment on the game server capable of eating the others and will be first in the ranking of that moment, trying to resist and not get overtaken by someone else.
Already after the first few games you immediately understand why Agar.io has become a craze: easy to learn, incredibly fun and engaging, competitive.


As said above, you can play Agario from your computer on the website Agar.io (where access with a Facebook account is required), on iPhone, its Android and unofficially too on Windows Phone smartphone looking for the game in the store Hungry Cells.

In Agar.io you can only play online in a free-for-all where there are no alliances or friendships and where everyone must take care of himself, resist and eat others without scruples. Agario has a simple graphic, with many colored circles that can be given any name. Some special names draw the sphere in a particular way and, for example, being called British, you will have a ball with the cittàn flag while being called facebook, you will play with the Facebook logo.
The names that activate different balls are described on this page.
If you are bothered by too vulgar names, you can choose in the game options to hide the names and see the spheres all empty in a clean way.

The game mechanics of Agar.io it may seem obvious and simple, but there are some too tricks that are important to know to last longer in each game and get big. To begin with, you have to go to great lengths to eat the smaller balls in order to grow. The score practically indicates the greatness achieved.
The main rule that you must keep in mind at all times is that the more the size of the sphere grows, the slower it becomes. This allows those who start a new game to grow by running away from the older ones who, in turn, will be forced to split up to eat the smaller ones who become too fast to be caught.
When you get a little bigger, you can tap a side button on the screen (or the space bar if playing from PC) to divide the sphere into two smaller ones. This is the most important trick in Agar.io for eating the little ones even if you are slower in running.
The other key on the phone screen or the W if playing from PC, expels some mass which is both a way to lighten up and become faster in the movements at that precise moment, and a way to shoot. The green balls still encountered in the picture are viruses, which can be used to protect oneself when one is younger, but must be avoided when one becomes older.
A large sphere that goes on a virus divides itself into dozens of small balls that become easy prey for all those around them.
If you get eaten, the game is over and you start all over again, with the small, fast ball.
A trick to use when we get old enough to eat the fattest of us is to shoot viruses. In fact, by shooting mass on one of the green viruses, it swells until it splits in two, shooting the second one out. If you can shoot a virus at a sphere, it will burst into small balls and become easy to eat.

At the end in Agar.io a real survival battle takes place where you have to try not to be swallowed by others and, at the same time, try to eat the smaller fish. The only flaw of Agar.io is the possible lag when the players are many but the game, as mentioned, is becoming the summer craze all over the world and the Miniclip developers are improving it every day.

Guide and tricks Agar.io, the mania game for Android, iPhone and browser

add a comment of Guide and tricks Agar.io, the mania game for Android, iPhone and browser