Bubble Witch 3 cheats and guide to pass the levels 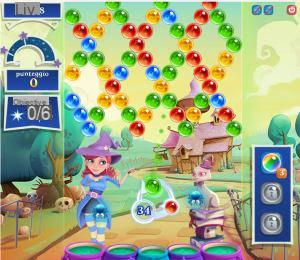 "There's a new witch in town," the King game ad says Bubble Witch Saga 3 launched, as happened for Candy Crush Saga, on Facebook and Android and iPhone smartphones.
The game takes players to a colorful world of cute witches and pets, with a challenge of numerous levels and a limited number of moves.
The game is similar to the previous Bubble Witch Saga game and you have to shoot bubbles upwards to put the various colors together.
Each level has a different goal, someone might ask to erase six spaces along the top line, to free a ghost trapped in the middle of bubbles or animals blocked by the various bubbles.
Then there are bonus bubbles and spider mites that give extra points when the bubbles fall on them.
In this article we see some tricks on how to play Bubble Witch Saga 3 to pass the levels of this King game which, like Candy Crush Saga, becomes an indispensable pastime.

In Bubble Witch Saga 3, you have five lives per game that you can use to beat as many levels as possible each day.
The game is available for iPhone, Android and PC via Facebook whose account is required to log in, to send and receive extra lives from friends and to see who is better among them.
Speaking of tricks to play Bubble Witch Saga 3, without bothering applications or cheating systems, let's see how to get more lives and pass the game levels more easily, without paying a penny.

1) Aim high
The number one rule of any bubble popping game is to go pop the top ones.
In Bubble Witch 3, taking the highest bubbles will also cause the bottom bubbles attached to them to fall.
So it's better not to waste shots trying to knock out the closest ones, but aim for the farthest ones at the top.
To get to the highest lines you need to bounce the bubbles shot against the wall and guess the right trajectory.

2) Don't waste your shots
When playing, never forget to swap between two different bubbles by touching the shooter.
It is likely that the next one will be more useful and not the one in the barrel ready to fire.

3) Try to break the bubbles with each shot
When you fire a blank shot, which doesn't break other bubbles, they don't pop out spiders which are decisive for scoring more points.
While they are not decisive for clearing a level, it is worth getting as many spiders out as possible before destroying large groups of bubbles.

4) Manage the few free resources the game offers
At the start of the game you will earn some gold bars which will have to be kept to unlock a new set of levels upon reaching a gate.
It is tempting to use it to get five extra bubbles in order to pass a nearly done level, but unless it's the tenth time, it's best to give it another try from the beginning.
Of course, you can unlock the new levels by asking your friends for help.
The speech is the same for special bubbles such as the rainbow bubble or the others that appear on the box on the right.
It will be that the only time you will see bonuses of that type for free so better use them when it seems like the only way to pass a level

5) Types of special bubbles
- Line-breaking bubbles appear in the most difficult levels and are prioritized.
As already mentioned in point 1, it is necessary to pull them on the highest line and not waste it to drop a low line.
- Cloud bubbles have no color until they come in contact with another bubble.
When you want to see what color they have, it's best to hit them so they don't close and you can pop them later.
- Black holes are annoying and difficult to remove.
Each black hole can only absorb three bubbles before disappearing, so in certain situations, you need to fire three shots at it to make it go away.
- Solid bubbles are black in color and cannot be removed except by blasting the line that holds them at the top.

6) Having more lives with the clock trick
As you can also do in Candy Crush, to have an extra life to play you can innocently cheat if you play on your smartphone by putting the time ahead of three hours.
Since a life is given back every half hour, artificially moving forward in time will allow you to have these lives back faster.
After resuming lives, you can put the clock back to the right time.

As with other games, looking on the internet you will find cheats, which are the tricks to cheat and get more lives or gold bars.
As I see it, playing with cheats is like not playing so I prefer not to talk about it.

Bubble Witch 3 cheats and guide to pass the levels

Audio Video Bubble Witch 3 cheats and guide to pass the levels
How to use GIMP: complete guide ❯