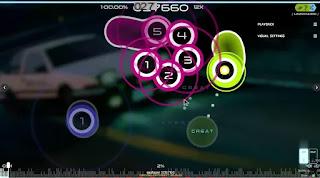 In this list we discover the best PC games where music is the absolute protagonist, where the goal can be to play or to follow a rhythm or even sing. Some of them are dedicated to children, while others are more difficult games, which can become real challenges against other players.
There are therefore web applications that are real artistic creations developed by professionals who have combined drugs high-level musical interactive animations where everyone can play with the mouse.
There are also games to download, with multiplayer challenges where you can have fun listening to songs and challenging other players.
Below then the best music games, both online and for download.


1) osu! is a very successful Japanese game, free and multiplayer, where you have to follow the rhythm of the music by hitting the elements that appear on the screen in time. The game is for Windows PC, it has many songs to listen to and play and many different ways to play, with mouse or keyboard. or up! is among the most played games of 2020.

2) Inside My Radio is a game where you move to the rhythm of music, to be downloaded on PC. Inside My Radio's goal is to move a small square designed like a portable stereo with headphones on and sunglasses, making it jump in the path, avoiding obstacles. The setting is the inside of a radio, complete with transistors, coils and hanging wires. During the game it is better to raise the volume of the computer speakers, because the square must be move left and right following the rhythm of electronic music of excellent quality, composed with regular bass and techno sounds.

3) Guitar Hero is the game where, while playing a song, you have to press the keys indicated on the screen, taking care of the rhythm. On PC, the best and most similar game to Guitar Hero is Frets On Fire which allows you to play the guitar using the keyboard.

4) Clone Hero is another free game that takes up the style of Guitar Hero, where you have to follow the rhythm of the songs to hit the right keys in time.

5) Syntesia is a game where you follow the notes of the piano, always of the Guitar Hero genre, very simple but more melodious.

6) Piano Tiles for Windows 10 is the game where you play melodies and songs with the piano, touching the tiles that fall from above following the rhythm. It is one of the most played music games on smartphones, also available on Windows 10 as an app.

6) Another series of games are those where you have to follow the on-screen commands and press the right keys on the keyboard, always to the rhythm of the music, not to play but to make your avatar dance. Among these we can mention Audition and StepMania for dance to the computer with disco games.

7) Ultrastar Deluxe it's kind of Guitar Hero for singers, a karaoke game where you sing, which I talked about in the article on how composing music, playing and singing.
Those who love to sing, besides Ultrastar Deluxe mentioned above, can play Karaoke online on YouTube, at Karaoke on the computer

8) Note Fighter for Windows 10 is a beautiful free music game where the winner is the one who can best read the notes on a score following the rhythm of a symphony with a character.

9) Synaesthete it's a mix between RPG (role playing games) and Guitar Hero; I didn't play it personally but, looking at the images and listening to the soundtrack, I think it will be worth trying.
Synaesthete is a game to download on pc. Basically you drive a character who has to shoot enemies, but to hit them you have to shoot following the notes that scroll on the screen.

10) Another free music game where to follow the beat is O2Jam, for download to PC, featuring multiple customizable avatars, multiplayer challenges and plenty of pace to race on.

11) Between the games to play techno music we had, in another article, written about web applications to create electronic and techno music. Sites like Tony-b Machine make you

12 ) Music experiments on the Google Music Lab site is a collection of interactive music games that are very fun and beautiful to look at and play.

13) Another fun game is Drumbit which allows you to play electronic music with your computer keyboard.

14 ) Inside Music is an experimental Google project where it is possible to listen to some music and break it down into each instrument and vocal part. The particular 3D interface is all immersive, as if you were inside the music in a literal sense.

In addition to these, in other articles it is worth mentioning other music games reported in the past:

1) The voices of an a cappella choir.
2) The interactive online battery.
3) Online piano and musical keyboards.
4) Hypnotic sounds and melodies played with graphic synthesizers.
5) The YouTube interactive keyboard.
6) Virtual musical instruments on the internet to try.