Upgrade your PC by changing just one internal piece 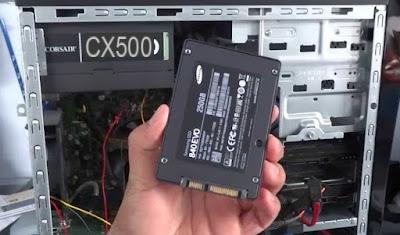 Sometimes it is not necessary to buy a new computer every 2 years to have a performing machine: in most cases it is enough to replace one or two hardware parts to give new life even to an old and slow PC. It is therefore interesting to understand which hardware updates have the most impact on the performance of a computer, which changes improve the PC the most and how to upgrade it from the hardware point of view, that is buying new parts to replace old ones. These replacements can be done almost entirely on an assembled desktop computer, while more limited but still possible on a laptop that may, however, have some welded and non-upgradeable pieces.
Let's see together then what we can do for improve the PC by changing a piece and upgrading the hardware, also based on the expense that we are willing to make.
The updates that we propose will allow you to significantly improve the performance of the PC in use (whether fixed or portable) by spending a certainly lower amount than that which can be spent buying a new computer.
We advise you to follow the proposed order carefully: if we need to enhance all the elements indicated, let's start with those indicated in the first chapters, so as to immediately obtain an increase in performance.

Adding more memory is the simplest and least expensive upgrade for a PC and can be done on both desktops and laptops without any particular technical difficulties.
Currently we can start Windows 10 and virtually all popular programs without slowing down by adopting 16 GB of RAM; if our laptop or desktop PC has only 8 GB of RAM (very common configuration) we advise you to immediately add a bank of RAM like those shown below.
If we have less than 8GB of RAM on our computer, it is better to remove the RAM bank or banks already present and buy an 8GB RAM module immediately; the next RAM module (to get to 16GB) we can buy it even after a month, so as to amortize the final expense.
To learn more we can read our guide How to increase the Ram and add new memory to the pc.

If inside the PC there is a normal hard disk we must immediately replace it with an SSD: this one it is by far the most effective hardware modification for any computerbe it a desktop or laptop PC. Some SATA SSDs that we can add to any computer can be found in the list below.
We have already talked about differences between hard disk and SSD pointing out with some emphasis how much the SSD is faster than the HDD.
On the SSD we can install the operating system and programs, while on the old mechanical disk we can keep Windows backups or use it as a data archive, so as to have all the space you need.
In other articles we have seen the Best SSD drives to buy to make your PC go as fast as a tablet e How to upgrade laptop disk with a new SSD. If we don't know how to move Windows from a mechanical disk to an SSD, we can also read our guide on how Move Windows to SSD without reinstalling everything.

Changing a PC's processor is a complex operation and definitely out of the reach of most users who use the computer to study, surf the Internet or play sporadically. Almost certainly we will have to ask a technician for help if you are not sure what you are doing and then the processor has a high cost.
Other than that, just upgrading the processor with a more powerful one may not bring any improvement if the rest of the computer stays the same and can create compatibility problems by requiring more RAM and changing the entire motherboard. Changing processor can be effective for PC performance if you switch to a new one that is much more powerful than the old one.
In the end you can first change your PC to a new one, perhaps keeping the disk, RAM and video card of the old one.

To change processor, please read our guide How to change PC processor.

A modern video card has very high costs (even more than € 300), and it is therefore worth considering this update only if you use your PC with latest generation video games or if you use heavy graphics programs. If we are not serious gamers, we do not work with 3D graphics manipulation or video editing, we do not need to buy a better graphics card than the one already available in the system (dedicated or integrated in the processor).

In any case we can learn more by reading our guide on Which video card (graphics card) to buy for the computer.

Excluding the components above, all the rest of a computer's hardware can be changed and improved at your own pace or when the need arises, as we will rarely gain any advantage in performance and speed (except if we re-assemble a whole computer starting from the motherboard).
While we don't have the ability to upgrade all the components listed above, we can very well wait for better times and only buy the components that really change the speed of the computer (RAM and SSD).

In conclusion, as mentioned in another article, to improve even a portable PC you have to change disk and add RAM. Of course, if it is a very old computer, even these changes will not be beneficial and it will certainly be better buy a new PC in full, without wasting time, money and effort in trying to improve it.
The old PC doesn't have to end up in the trash: we can always recycle it and optimize it as a file server or as a network NAS, adding a lightweight Linux system.

Upgrade your PC by changing just one internal piece