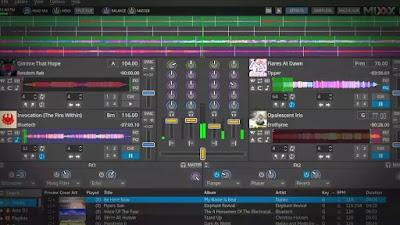 Mixing audio files on your computer has become not only easy thanks to increasingly user friendly programs, but also free.
Below we see the best free programs for PC to mix songs and music tracks like DJs would, with the possibility of modifying the characteristics of the sound and adding various types of effects.
For example, you can change the playback speed, balance, master volume level, pitch and much more, creating audio playlists of music or mixed files.

The ones below are free programs without limitations, which have the best feature of being simple to use, not always beautiful to look at but in any case without confusing menus and without particularly complex functions, designed with the sole purpose of mix mp3 or other audio files and music saved on your PC.


1) Mixxx is one of the most popular free programs for DJs, which allows you to add songs, play them together and mix them.
It includes all the tools you need to mix, change volumes separately for each song and add audio effects.
Thanks to the very accurate interface of this software with a fully functional DJ console, Mixxx is definitely the number one in this category of programs.

2) Mixers is a simple, open source audio mixing software for Windows that allows you to play 64 songs at a time on its interface.
You can mix tracks by playing them simultaneously and while playing the mixes, change volume, bass, speed and other parameters.
It is not possible to save the mixed audio here or export it to MP3, but you can save the remixed playlist to be able to listen to it from the program itself.
The software interface is very classic and basic, easy to add MP3 songs to play and mix.

3) MRT Mixer is a free professional looking audio mixing software for PC.
After adding the songs, you can play and edit them, for each audio file, volume, tempo, sample rate, phaser, echo and other things.
While playing music, you can move the levers to change various parameters until you hear the perfect blend of the music.

4) Audio Mixing Board is an open source software to create mixes by joining 2, 3 or even 4 tracks by importing files from PC.
This program also allows you to change the audio parameters of the music so that you can raise and lower the volumes by moving from one song to another quickly.
Unfortunately there isn't an option to export the mix and save it as an MP3 file, so you'll need to use audio recording software to do this.

5) MixPad is one of the best free software to have audio mixer on Windows PC, which allows you to create, remix, merge and record multiple tracks together to produce continuous and quality music.
You can easily load as many tracks as you want and then play them back together one after the other.
While the songs are playing, you can edit different audio parameters and then change the volume level of the tracks separately, mute a specific song, create a song and apply audio effects such as chorus, cross-fade, amplify, reverb and so on.
Eventually you can also record the final mix as an MP3 file and export the mixed tracks to an audio file as well.
This program is free for non-commercial use only.

6) Mix player is a music player which also supports playing multiple songs together.
There are two different decks in order to load two music and change the volumes and other parameters to remix them together, also thanks to an equalizer to control the sounds of a track.

7) X-Mixxx is another free, portable, installation-free audio mixing software for Windows PC that works as a music player.
You can open two tracks together and mix them in any way you like using the console's various knobs, playing them back simultaneously.

8) Audio Mixer Lite is the simplest audio mixing software for Windows, portable, which allows you to listen to up to 8 different songs and mix them.
You can then play all the songs together and change various parameters to create a unique song.
As you mix songs, you can have different volume levels for each song.
There is no possibility to save the final songs, therefore, as mentioned in point 4, you will need to use an external program if you want to record the mixed music.