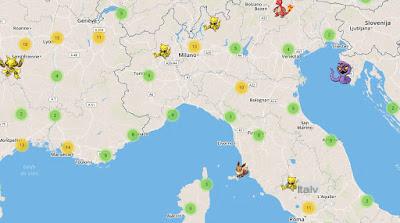 The phenomenon of the Pokemon Go game shows no sign of abating and continues to increase day by day, favored by the summer, by travel and by the fact that everyone is talking about it and everyone wants it.
There are two types of Pokemon coach players, those maniacs who want to find them all as quickly as possible and make them evolve until they become the best and the most calm, who play when they can, for relaxation and fun for their own sake, without the ambition to be number one.
While the better ones already know everything, for casual and less frequent players there may be some useful apps to facilitate the game and support for find Pokemon how they are distributed in the world, for know where everyone is without waiting to see them appear on the screen, I understood the rarest ones.
Pokemon GO is definitely a challenging game, but thanks to thehelp from radar apps, maps and other notification tools it can get easier (but without cheating with cheats).

The two best maps app to help us find Pokemon around they are PokeVision and Pokeradar.

The map Pokeradar, available online and as an app for Android (to be downloaded as an apk by clicking the help link at the top right of the site), it is a site like Google Maps where you can find the location of the Pokemon, reported by other users.
The map allows you to search for rare Pokemon anywhere in the world and you can also set a filter to see where only a certain type of Pokémon is. The map is powered by Pokémon Go players, so it's also possible there are false reports.
Fortunately, for each Pokemon that appears on the map, you can click to find some kind of feedback, that is, the number of other trainers who have found the indication useful.
For each Pokemon it is also written when it was caught, so you know what time of day it is best to look for it.

Even better is the map of Pokemon live go which is not a website, but a program to download for Windows PC.
To use this extraordinary program, download it by pressing the green button at the top right and choose the ZIP file download.
Extract the ZIP and then search for the executable file to launch the map.

Pokevision is a similar app that is not based, however, on player reports, but on the Niantic API in order to view the current locations of the Pokemon and how long they will be there.
PokéVision is therefore able to show exactly where Pokémon are now.
The only flaw is that you can't do a search by filtering Pokemon by type and that it's only available online, not as a mobile app.
Obviously such a tool takes away a lot of the fun of Pokemon research, but it's a big help.

Other maps I'm on the site Pokefind which uses a different approach and always allows you to filter the map according to the Pokemon sought.
The site Pokokemon instead it allows you to find Pokestops and Gyms and know where they are all over the world.

An exceptionally useful app for everyone is PokeNotify, which once installed on the Android smartphone allows you to receive notifications whenever there is a Pokemon nearby ready to be captured.
You can also apply a filter so that you are only warned if we are close to rare and legendary Pokemon.
This application has been removed from the Google Play store, but can still be downloaded from the Reddit website (click on the word here from the first posting).
Alternatively, also try the very similar Notifications for Pokemon GO app available on the reliable and secure APKMirror site.

The app Poke Mesh per Androidfinally, it is the best app to see a real time map with the location of Pokemon around the world and nearby.

It can also be play Pokemon Go on an android smartphone with the screen off to save battery by installing the app Battery Extender GO
From our website Pokeassistant there is a collection of useful tools for all trainers, to make calculations on evolutions and find out how each available Pokemon behaves.

add a comment of Best apps and maps to find Pokemon