Set up a new Amazon Echo and Alexa settings 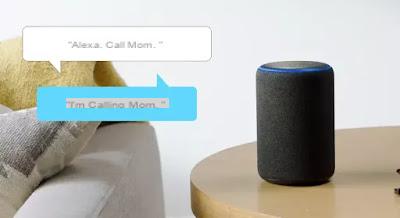 The Amazon Echo has become a bit of the product of the year, released in December on the Amazon store and immediately sold out becoming one of the most popular 2018 Christmas gifts.
As seen in the article on how to use the functions of the Amazon Echo, we see in this guide how to configure it, how to use its main settings to enjoy its virtual intelligence called Alexa.

Amazon's Echo is a Smart speaker, listening to people's questions by performing tasks or giving even elaborate informative answers.
The Echo does not rely on a smartphone or computer to work and once activated and configured correctly, it becomes an independent device that always listens ready to respond to the requests of all the people who use it.
Only at the beginning, to set up a new Echo or Echo Dot, therefore, it is necessary use your smartphone or even your PC to activate Alexa and put it into operation


To configure the new Echo from a smartphone, you need to download the Alexa app for Android or iPhone.
If you prefer to use your PC, you have to go to the site instead https://alexa.amazon.com.
In both cases, you must log in with an Amazon account, which must be created if ever done yet.

NOTE: The Alexa app for Windows 10 is also available, but for now it cannot be downloaded from the cittàn Microsoft store.

The configuration via the app or via the Alexa website on PC is practically the same and is quite simple:

- If you bought the Amazon Echo for yourself from the Amazon Store, the account used to buy it should already be set up.
- If instead the Echo was received as a gift, it will be necessary to add it to the Alexa app by going to Devices and pressing the + button at the top right. On the site you must instead go to Settings and then click on the word Configure new device.
- Follow the wizard to indicate the model of Echo owned (Echo Dot, Echo, Echo Studio).

- Selecting the Wi-Fi network in the app basically means entering the access password of your network.
On the smartphone, if the network warning without internet appears, it means that the phone has connected to the Echo network, so you should not change but cancel the warning.
On the PC, you need to connect to the network named Amazon-XXX, which will then disappear once you enter the wifi password.

Echo settings to configure
Once the Echo connects to the internet, you can already talk to Alexa and ask for things like "what's the weather like" or "who are you" etc.
From the main menu (by pressing the button with three lines in the app or in Settings on the site), you can access the settings and all the configuration functions of Alexa and Echo.
The important things to fix are:
- Under Alexa Account> Recognized Voices, you can create a voice profile to improve the recognition of voice commands.
- Under Alexa Account> Children's Skills, activate them if there are children in the house in order to install the Skills dedicated to them.
- Device settings, select the Echo and then configure the Location, which is necessary to get the weather forecast directly ("how is the weather today?")
- In Settings> Daily Summary, tap the + to add a news source to your Skills.
At the moment one of the best is the SkyTG24 Skill while for sports news, Sport Mediaset.
Once the news skills are added, you can ask Alexa "Tell me today's news" and find out what's on.
In the Settings you can also activate the Calendar functions to connect the calendar of commitments from Google or Microsoft or Apple and the traffic settings, adding home address and office address to be updated on travel times.


Alexa's Skills
The Skills are the added value of the Amazon Echo compared to other virtual assistants such as Google Home.
It is basically an app for Alexa, to add functions and voice commands.
For example, you can activate the Giallozafferano Skills to ask for recipes to cook or the Skill for reading nursery rhymes or the one to listen to relaxing sounds or those for home automation, to manage devices such as lights or switches of various brands.
There are also games among the Skills, such as Akinator the genius who guesses what we are thinking.

The Drop In function
Another function to activate or at least to try on the Echo is that of DropIn.
Having two Echos in the house, it is possible to use the DropIn to use the device as an intercom, then to talk from one room to another.
In an office it could be a way to talk to other floors or buildings while you can also use it to talk to friends.
The peculiarity of DropIn is that whoever receives the call does not have to answer, because the Echos are automatically connected and at any time, from one of the two, you can ask Alexa "Dropin on ..." to enter into communication and listen from the 'Echo called, with no need for the other side to accept the call.
While the Dropin between devices configured by the same account is automatic, that on other Echos of other people must be authorized.
This can be done by tapping in the contact list on the name of the person who has an Echo, activating the Drop In switch.
Trying it with a friend, I noticed how at any moment I could enter his house and suddenly disturb him and listen to the sounds in his house.
We must therefore be careful not to play it too much.
To activate or deactivate the Drop In completely, go to Settings> Device Settings> Echo> Communications.

Calls for free
With an Echo you can make free calls to mobile phones that have the Alexa app installed.
You can then call people by telling Alexa "call Claudio", if we have his number in the address book and if we know that Claudio has Alexa installed (there is no need for him to have an Echo).

Music
Without a doubt, the main function of the Amazon Echo is listening to streaming music.
To do this for free, the only way is through Tunein's radios, which is automatically activated on every Echo. You can then tell Alexa "Put Radio DJ on TuneIn" to listen to Radio Dj or other radios in the world.
The best way to listen to music on Echo is instead to get an Amazon Music subscription, which used on Echo costs 4 Euros per month, much less than Spotify or other apps. Those with an Amazon Prime account will be able to listen to 40 hours a month of music from Amazon Music, without paying anything.

routines
Another powerful function of the Echo are routines, useful if you have home automation devices to automate. You can ask that a light be turned on at 19 pm every day, just to give a simple example.
We have seen how to create routines and new Alexa voice commands.
Going to be processed, it is also possible to link the devices connected to the Echo and Alexa with the web apps, using the IFTTT service

Finally, remember that it is possible buy an Echo device on Amazon, choosing between the small ball-shaped Echo Dot model, the Medium Echo with Subwoofer and the Echo PStudio, the larger and Echo Flex, the cheapest. Setting up other Amazon Echo devices will follow the same process.

Set up a new Amazon Echo and Alexa settings