Don't tell me you've never heard of Worms !!
Worms 2, in particular, is one of the historical games for PC, developed several years ago, where there are two teams of soldier worms armed with different cannons. The game is turn-based in the sense that first he shoots one and tries to hit the opponent, then he shoots the other; during each turn you can move the worms on the board and, before shooting, you decide the trajectory of the shot and the firepower in order to hit the targets.
Worms is the typical game that is fun because it is played in the company of someone (even alone against the computer) and does not engage the head that much, each turn can last a maximum of 30 seconds so the action is fast and the important thing is the aim.

Searching for Worms on the internet you will find the Game-Remakes site which collects all versions of Worms including Worms 2, Worms 4 Mayem and Worms 3D which, however, are all paid games, to buy.
So, since what interests us is the type of game and not the fact that there are worms fighting, we find other games like Worms, free to download and to install on Windows PC, Linux and Mac, or in flash to play online from the internet browser. 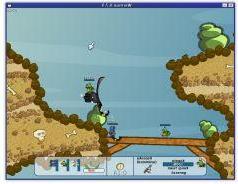 1) Wormux is an opensource game that has been around for some time that was updated only a few months ago with big improvements so much that, I could say, it is the most similar game to Worms of this list. Instead of earthworms, the characters featured in the game have been replaced by random avatars and cartoons (some are the mascots of some opensource programs like Gimp and Pidgin).
The game is turn-based, you shoot once by one and you can choose which weapon to use from different types. To play online, you can either configure a Lan network or play online from the Wormux servers. The scenarios and battlefields are very colorful and well designed while the weapons vary from guns and rifles to dynamite bombs and objects like footballs. The aim is always the same, to eliminate the entire opposing team by keeping at least one element of their own. Wormux must be downloaded and installed and works on Windows, Linux and Mac.

2) Hedgewars is another free game similar to Worms, the best and the only one on this list with continuous development and a community of players.
The playability, The design of the maps, the selection of weapons, the voiceovers and the overall feel of the game is strikingly similar to the original game and, except that the characters are different, it looks like the real Worms!. In Hedgewars, teams are made up of pink, hedgehog-like animals, each dressed differently. The graphics are a bit poor and this is the main flaw of the game, however, if you get used to it and are not too picky, you will appreciate the fact that you can play online against other people on the servers made available. Downloading and installing Hedgewars can be done from both Linux, mac and Windows 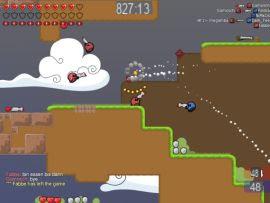 3) Teeworlds it's the funniest of all, a little different game from Worms, why it is not turn-based, we fight and move in real time. This means that instead the players can move the pieces and shoot at the same time, without waiting for the other to finish! It's chaos! The aim is always the same, to eliminate the opposing team but the gameplay and weapons are modified. There are three types of game modes: Deathmatch, Team Deathmatch, and Capture the Flag. It takes a while to get used to it, compared to Worms and the like this is much faster and more frenetic and the speed of action is an important factor in winning. You do not have to wait for the turn, you play until the time runs out or until one team eliminates all the members of the other. It is played on both Linux and Windows and Mac and the game must be downloaded.

4) Gunound (coming with the new version in 2021) is a clone game of a Worms, multiplayer, more complex because it has elements to MMORPG: registration, registration, development, communication with other players and so on. Squad members move on mobile combat vehicles which can be tanks, horses, turtles, tractors and others. Each of them has strengths and weaknesses, including variable firepower and movement speed. The game interface is more advanced and I recommend following the initial tutorial to immediately understand the commands. The shot is easy enough, but the direction and speed of the wind must also be considered when aiming. There are also defensive objects so it's not just attack but, during your turn, you can also prepare for a defense strategy. Notice that GunBound is free to play, only on Windows.

5) Raft Wars is a great turn-based game with very nice graphics to see where the Worms are babies in diapers.

6) Going back to simpler games, the ideal, to get distracted for a moment with this type of games, is not to download anything and play directly from the internet browser with the versioni Worms in flash. For example, it can be found Battle Tanks where you play against the computer or against another person (not online, you have to stand side by side).
Turn-based game, with one tank against another, whoever stays alive wins!

7) A perfect Worms clone è Worms su Itch.io, practically identical to the original version, which can be bought for 8 Dollars.

8) Atomic Tanks is an opensource game inspired by Worms and very similar, where instead of worms there are tanks. The game is completely free for Windows PC, also available in a portable version.