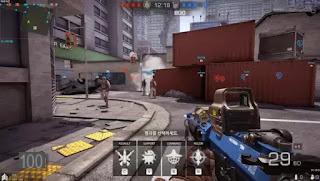 The kind of shooter games it is always one of the most loved by both regular and casual gamers, both on Playstation and Xbox consoles, and also on PC, where the games now have the same quality. Doom, Call Of Duty, Far Cry are some of the most famous and best-selling shooter game names, with realistic graphics, first person view and smart enemies that won't get hit so easily by our powerful assault weapon.
In this article we are going to discover the ones that we can consider today best online shooter games (First Person Shooter Games o FPS) that you can free download and install on your computer, which are free to play, with matches multiplayer against other players around the world.


1) Team Fortress 2, after a few years, it still remains one of the funniest free shooter games, both for the nice graphics that do not take itself too seriously (and above all light so you can play even from a laptop), and for the speed of the ' action and excellent combat dynamics, very varied. Team Fortress 2 is a free to play game supported by purchases of weapons and customization items in the in-game shop. All items can still be earned randomly and for free by playing and there are no particular competitive advantages for payers.

2) Cross Fire is one of the oldest online shooter games, which can still be played for free today by participating in a community of loyal gamers. The game runs smooth and fluid in the graphics that are not too detailed but very light. Cross Fire features four game modes to offer an intense online gaming experience: "Search & Destroy" with objective missions until all members of the opposing team are eliminated; 'Team Deathmatch' has only one mission, kill as many enemies as possible; "Elimination" involves killing all enemy team members and "Ghost Mode" with more tactics and coolness.

3) Unreal Tournament is the name of one of the most famous games ever, relaunched in 2017 with a new version, currently in alpha stage. The game already has a substantial following of players who can, for the moment, play for free in full and thus support development and evolution before the official release.

4) Blacklight: Retribution is a great FPS shooter game, with a slower and more thoughtful pace, with team or player versus player matches, with a futuristic city setting. This game is free to download, but if you want to be competitive you must pay at least 5 Euros in the game to buy the special weapons, otherwise you will be left too far behind.

5) Fortnite: battle royal with 100 players together is the game of the moment, the number one game of 2018, which thrills millions of players from all over the world in individual or team challenges, always in multiplayer.

6) Warsaw is a very fast, very acrobatic shooter, with very light graphics that works well on any computer, even an old one. It is a mix between fps and a platform game where jumps and acrobatic movements (such as walking on the walls) are an important part of the game.

7) Apex Legend is one of the most popular games among online shooters, similar to Fortnite, where you meet and fight against players from all over the world. The action is very acrobatic and you shoot and jump with decided speed and energy. It's an open fight against other online players, with firearms and swords where characters can be customized and weapons purchased.

8) PlanetSide 2 is a powerful, fast-paced game with RPG components, with an RPG-style progression that rewards the most present and specialized players.

9) Warface is one of the best free to play online shooters for PC, free on Steam, developed by Crytek, the same house behind hits like Crysis and Far Cry. FPS combat is very smooth, with realistic weapons, deathmatches, arenas and different classes of fighters.

10 ) Combat Arms has been, for several years, one of the most popular shooter games titles, revived and completely renewed in a Reloaded version in 2017, with multiplayer battles with players from all over the world.

11 ) Argon is a very good tactical shooter, released in 2017, with great graphics and real war action. This tactical shooter game features classic player vs player modes and a cooperative sandbox mode with random objectives and up to 10 players teaming up against the computer. Players will receive experience points based on their performance and by gaining new levels and unlocking new weapons, tools and miscellaneous items.

12 ) Gigantic is a free game that combines shooter modes, with MOBA gameplay, in strategic 5 vs 5 team-based battles. Each team has a giant computer controlled monster that acts as a defensive wall, while you can play as a melee soldier or with long shots. The game is free, but if you want to keep a character as a regular player, you have to pay.

13 ) Black SquadTo top it off, it's a military first person shooter with hardcore action and game modes solid enough to satisfy any fan of the FPS genre. Battles can be done with 10 5v5 players up to battle mode matches, 16v16, where players can call for air strikes. With extensive character customization, the game still remains well balanced, without giving too many advantages to paying players and leaving those who play for free able to compete all the same by choosing to develop the various skills and use the most modern firearms to fight. .

Another 10 10 first-person 3D games are described on another page.

Also worth playing are:
- Doom and the 3's 90D shooters on PC and Mac in various free versions
- Best Battle Royale games for PC, Android and iPhone