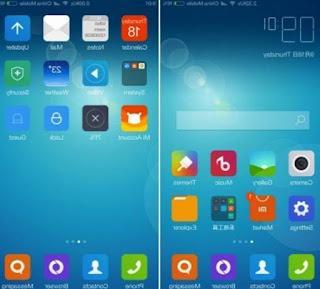 Android is an open source operating system, the source code of which can be taken and modified to install on a smartphone.
When Google releases a new version of Android, it is taken by smartphone manufacturers Samsung, LG, HTC and others and customized with a different launcher, icons and pre-installed applications.
But since Android is open source, there are not only mobile phone manufacturers, but also some capable developers who, unhappy with the heavy official versions, unhinge the system by removing unnecessary applications and functions and adding extra things to them.
They are the so-called "Custom ROM", derived from"ROM Stock", the original Google also called AOSP - Android Open Source Project which is installed on Nexus devices.
Le ROM Custom they are better than those installed in the various models of mobile phones, free, without constraints, free, with infinite customization options, light and without bloatware (i.e. applications that not everyone uses every day, but not that can be removed because they are integrated into the system), always updated and installable on almost all mobile phone models.
There are many ROMs available to choose from, but 10 are the best Android versions for every smartphone, which can be installed with almost all recent and best-selling devices.

1) LineageOS is the ROM born from the ashes of Cyanogenmod, which is was the best Android ROM available, simple, similar to Google Stock ROM, light weight and no special effects. The project seems to have resumed its development pace in recent months, therefore, even if for now the versions of LineageOS are almost all of the "nightly" type (ie in full development phase), there are excellent hopes for the future.
CyanogenMod was also the most mature Custom ROM of all, the one that had existed for the longest time and available for almost all smartphone models, including older ones.
CyanogenMod was therefore the best choice for those who wanted a simple version, as similar as possible to the version installed in the Nexus and ideal for surviving with an older mobile with little space and little memory. For 2017, however, it might be better to move on to another while waiting for LineageOS to become more stable.

2) AOKP (Android Open Kang Project) is the ROM for those who want more, for those looking to push their smartphone more.
While CyanogenMod is an understated and practical Android version, AOKP celebrates the freedom to tweak and customize. AOKP is lightweight without bloatware applications, with a multitude of settings more than the original Android, with a minimalist look. AOKP is compatible with many smartphones released in the last year and the most popular models, although often not in the final stable version.

3) Paranoid Android it is the ideal choice for those who own a Nexus and OnePlus smartphone, for those who want to customize their mobile phone in a radical way. Paranoid Android introduces functionality on a completely different level, which almost feels like another operating system. There is no official website for Paranoid Android, but a Google+ page where you can find all the information and where to download the ROM. A standout feature of this ROM is the HALO interface, which brings each set of options into floating on-screen floating buttons that can be expanded with your finger.

4) Pac rom (closed) had become the second most used in the world after Cyanogenmod, which immediately stood out for its versatility, for those who want the best of both worlds.
PAC ROM combines all in one and in fact PAC stands for ParanoidAndroid, AOKP, CyanogenMod. PAC harmonises all the settings of the three ROMs into something without creating confusion and gives way to enjoy the best features of AOKP and Paranoid Android, in the regular environment of CyanogenMod.

5) MIUI ROM it is the most popular custom version of Android in China and the one pre-installed in many Xiaomi smartphones. The ROM is supported by many models of mobile phones and is perhaps the one with the most beautiful graphics ever and includes many powerful tools to do anything on the phone.

6) OMNIROM is a ROM that brings a graphically beautiful version of Android to the phone, which makes every compatible device run faster than it was before. This version of Android is compatible with different mobile phone models, even if the download page contains the code names and not the commercial names of the various devices.

7) Carbon Rom, can still be cited in 2017 even if the future of this project remains uncertain.

8) SlimRom is the lightest Android version, full of options to customize the system. At the moment, SlimRom is one of the few ways to bring Android 7 to Nexus 5 and other phones that will never be officially updated.

9) BlissRom it is an interesting and lively project, even if the ROMs are currently only available for some smartphones such as the Nexus.

10 ) Resurrection Remix is an open source project to which everyone can contribute for its development. Also for this reason, this is a ROM widely used in several smartphones, with excellent support for users in the forums. As for features, it could be said to include the best of features from other ROMs, including Paranoid Android, Omni, Slim, and AOKP.

These 10 ROMs (which I haven't tried all of them directly) work on every recent device.
Having a Nexus 6, a Samsung Galaxy S7 or S8, a Sony Experia, an LG or an HTC or Huawei, you can install each of these ROMs by following the specific guides.
Cyanogenmod was the easiest to install (or better "Flash") and the most stable (but now it's called Lineage OS, while versions like Paranoid Android or PAC Man Rom are good, even if not compatible with many smartphones.

Install an Android Custom ROM it is quite easy as seen in another article, even if, for each model, there may be variations in the procedure and it is important to first check their compatibility.
The reference forum for installing a Custom ROM is XDA Devolopers, in English, but complete with all information to solve problems.
In general and in a nutshell, to install an Android Custom ROM, the mobile phone must have been unlocked with ROOT and installed the ClockworkMod Recovery Console.
Then just restart the device in recovery mode, delete data and cache and then install the ROM that has been copied to the SD card with the ZIP format.
Obviously this is not a guide but only an abbreviated guide to the general panorama.