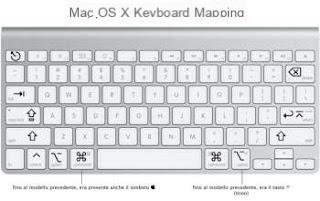 Whatever operating system or program you are using, knowing and knowing how to use key combinations makes everything easier and every job faster.
The fact of not having to take your hands off the keyboard while typing something or being able to browse the internet by opening multiple sites together and moving from one to the other without using the mouse saves a lot of time.
We talked about keyboard shortcuts on Windows PCs and now let's see one MAC keyboard guide, which is very similar, although there are some keys with different names.
The main of them is the CMD button or Command, which is the key to using so many key combinations and which can be thought of as the CTRL key on a Windows PC.

Speaking of key combinations, on Mac, there are so many that it is also difficult to remember them all.
Source most important however they can be summarized as follows:

Key combinations that can be used during Start / Stop
Press the C key at power up to start the Mac from a bootable disk.
- CMD-S, Boot into single user mode.
- SHIFT, Boot into Safe Mode.
- OPT-CMD-EXPELL, to put computer in sleep mode.
- CTRL-Eject, to open the Reboot, Sleep, Shutdown options window.

Keyboard combinations within programs
In any Mac OS X program, you can find useful keyboard shortcuts just by looking at its menu items.
Next to each menu item, usually, there is indicated the combination to use to do that operation.

You can too create custom key combinations in System Preferences, in the Keyboards section.
From here, you can add key shortcuts to control all sorts of actions on the Mac.
For example, those coming from a Windows PC can here swap the CMD key with CTRL.

To learn how to write special characters, symbols and emojis on Mac, you can read this guide from the Apple website.
Also on the Apple website you can have an overview of all the keyboard shortcuts possible on Mac.

add a comment of MAC keyboard guide and key combinations