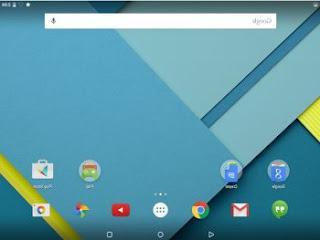 These days the owners of a Nexus 5 and Nexus 4 smartphone and Nexus 7 tablets both 2012 and 2013 are receiving the automatic update for the new version of Android, called Android 5.0 or Lollipop, already present on Nexus 6 and Nexus 9 devices.
Then comes the time to make one guide to all the new features of Android Lollipop, those most immediately visible and those most hidden in the various configuration menus.
This time, it is a more radical update, which changes not only the graphics, but also the inside of the operating system, made more performing and optimized, improving the security, privacy, notifications, usability and appearance of Android smartphones.
So let's see below what's new in Android 5 Lollipop and 5.1, summarizing the main functions and the most hidden tricks in 18 points.

Starting from most visible and most important changes of Android 5 and 5.1 we see:

1) Change the design of the operating system
The new design is called "Material" and involves all Google applications. Android 5 is well recognized for its new icons, bright colors and smoother animations. The All Applications menu is now a floating window on top of the main screen.

2) Battery saving mode
This is not visible to the eye, but is felt after a certain period of use. The smartphone with Android Lollipop has a longer battery life because the system optimizes energy saving when it is not in use. The new Android Runtime (ART) which replaces the previous one called Dalvik Runtime allows devices to more effectively distinguish between important and secondary tasks. In addition, application developers will be able to take advantage of this new runtime to optimize app code so, in the coming months, we should see a marked improvement in the battery life of Lollipop smartphones. What is visible is the notification icon when the battery drops below 10% charge and the request for activate energy saving when it falls below 5%. You can also make the power saving mode is activated automatically when the charge is less than 10% or 5%

3) Notifications
The notification system has been revised and improved in Lollipop. Notifications appear on the main screen so they are more visible. At the same time, when, for example, you use the Google Maps navigator and you receive a phone call, instead of seeing the call on the whole screen, effectively interrupting Google Maps, the notification appears at the top with the possibility of answering or ignoring. With Android Lollipop notifications there are also some more hidden tricks and features that you need to know.

4) notifications on the lock screen.
It is now possible to view, manage and reply to a message without having to unlock the phone and without opening the specific application.
This can be disabled if you have privacy concerns.
Notification options are in Settings -> Sound & Notifications. From here you can choose whether to view all notifications on the blocked device, whether to hide the most private sensitive ones or whether to disable the function.

5) Interruptions, priorities and "do not disturb"
On the same menu you will notice an option called Interruptions which allows you to stop notifications from certain applications. To understand how interruptions work, we need to start from the concept of priority. Pressing the volume keys will open a small menu where you can choose whether to receive notifications for everything, whether to receive them only for priority apps or whether to turn them off. If you turn off notifications, you get the "do not disturb". If you choose to use the" priority "mode you can optionally choose how many hours to keep it before returning to normal mode. When you choose priority, only notifications from certain applications or phone calls and messages from some will be received. To choose the apps with priority, go to the menu Settings -> Audio and notifications, then on Interruption to activate the priority of phone calls and messages, as well as those of external app events. By activating the priority of calls, you can also choose one or more contacts considered priority.
In the same menu you can also choose to use the "Priority" mode on specific days and at certain intervals of hours, useful for example when you go to the office and do not want to receive disturbing calls. Now go back and from the notifications menu, tap the option "App notifications" for choose those with priority. From this list it is also possible block notifications from some applications forever, which is very useful for avoiding spam in the notification bar from games or other apps.
With a bell button that appears by pressing the volume keys on the side of the device, you can put it on silent.

6) Multitasking (Overview)
By pressing the button at the bottom right, which now has a square icon, you access the multitasking of Android 5, different from that of Android 4, with the apps that scroll as if they were pages of a magazine. Everything is smoother and smoother, you can see the last activity done on the various open applications and you can close an app by pressing on the X of its window. Android 5's multitasking, which is called Overview mode, now also includes the individual tabs open on Google Chrome. Finally, note that if you switch the phone off and on again (rebooting is no longer possible), the overview still shows the recent apps that were open before turning off the phone.

7) Guest user
On an Android 5.0 smartphone or tablet, the guest user can be activated so that he or she can use the smartphone without being able to make phone calls or use private applications. The Guest user does not use the default Google account and uses the smartphone as if it were new, without the possibility of spying on the owner's content.
To configure it, go to the Settings -> Users menu.
You can switch to the guest user at any time by pulling down the notification bar at the top and tapping the smiley top right.
This also works when the smartphone is locked. The guest account is different from the user account which may be more free to use the phone, depending on the administrator's configurations (see also: Creating user and guest accounts on the Android tablet or using limited profiles)

8) Lock the phone to an application
Let's say that a friend asks us for our cell phone to make a phone call.
With Android Lollipop, before giving him the phone, you can block it on the app to make the phone call so that the friend cannot do anything else and has no possibility to look at our photos or our messages.
The function is activated from the security menu, by scrolling to the bottom where it says "Lock on screen".
Once active, tap the "Overview" button (see point 6), scroll through the app you want to view and tap the green pin button. To unlock the phone, press the back and overview keys at the same time for two seconds.
Optionally you may be prompted to enter the unlock code first.

9) Smart Lock
In the security menu there is now an option called "Smart Lock" which allows you to unlock the smartphone when it is in contact with a Bluetooth or NFC device. You can also make sure that your Android phone is always unlocked at home and in your pocket.
From the same menu you can also activate unlocking with facial recognition and unlocking with your voice by saying OK Google.
READ ALSO: Which Android screen protector and lock is safer?

To continue with the more hidden new features and tricks of Android Lollipop less known and less visible we also have:

10 ) The Email app now refers to the Gmail app which supports multiple mail accounts (even non-Gmail).

11) You can turn on the flashlight from the quick controls menu that appears by expanding the notification bar downwards.

12) Possibility of migrate data from an old Android smartphone to a new one with Lollipop using the bluetooth connection.
The data transfer wizard appears when you turn on a new smartphone for the first time (or after a fresh installation).

13) In the quick controls keypad (by pulling down the notification bar), you can touch the phone signal icon to immediately view the data traffic consumed, useful for monitoring consumption for subscriptions with limited internet traffic.

14 ) The watch app has been improved, with the possibility of setting different alarms for the various days of the week.
If you set thewake up alarm, you can quickly access its configuration by tapping the clock that appears by expanding the notification bar. The Clock application constantly changes its wallpaper, depending on the time of day.

15 ) High contrast text for people who see little of us, which can be activated from the Settings menu -> Accessibility.

16) to phone encryption it is enabled by default and becomes an option that can be immediately activated the first time a new smartphone is turned on. If you have updated, you can enable phone encryption from the security menu.

18 ) Double tap to turn on the screen, only for smartphones that support it (does not work on Nexus 5).

19) Voice command Ok Google recognized even if the phone is unlocked and even when the screen is off (the latter only on supported smartphones).

20 ) New Easter Egg trick, going to Settings- info on the phone, tap on Android version 4 times in quick succession to see the Lollipop lollipop. The trick doesn't stop there, tapping the lollipop several times and then long pressing on it opens up a game that is virtually identical to Flappy Bird.

21 ) Better controls for WiFi and Bluetooth
In practice, now, with Android 5.1, by pulling down the notification bar to discover the quick controls that activate wifi, bluetooh and other things, you can tap on the name of the wifi network to which you are connected to change it or to access its settings. This is a small change that makes accessing certain network settings much faster. The same thing happens for bluetooth profiles, by touching the name and selecting the one to use from the drop-down menu.

22 ) Body contact detection
In Android 5.1 (and also in Android 5.0) the Smartlock function has been improved on smartphones. We have explained how to use Smartlock to keep your phone always unlocked at home.
Now it is also possible to keep the phone unlocked even outside the home, automatically, if you activate the option, in Settings -> Security -> Smartlock, of the body contact detection. The way this detection works is that once your phone is unlocked with a PIN or pattern, it will no longer be locked if it is in your pocket, purse or hand. The process works thanks to the device's accelerometer, and while it leverages a bit of security, it's really handy to avoid unlocking your smartphone every time you take it out of your pocket.

23 ) Improved screen lock
Screen pinning works to lock the view to a specific application or image, with no option to go back. To lock the screen on an app, open it, press the square key to scroll through the last used apps, slide your finger upwards and then touch the pin icon to lock it. This is perfect for locking the cellphone when a child uses it or when it is given to a friend to prevent them from spying on other things. In Settings -> Security -> Screen lock, you can now ask that you also need to enter your pattern or PIN to unlock it.

Android Lollipop will also be available soon for Motorola smartphones (Moto G in the first place), HTC One, LG G3, Sony Xperia and, further on, also Samsung Galaxy for which, as usual, there will be wait patiently.