Top 25 free iPad apps, the most useful on the Apple tablet 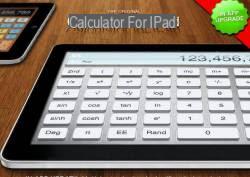 There are more than 300.000 applications in the Apple App Store that can be installed on an iPad. It therefore becomes useful to have a list with only le best free apps for the Apple tablet which still remains the best-selling one.
It should be noted that practically all applications for iPhone and iPod also work on iPad only if they are not optimized for the larger screen of the Apple tablet, they do not always have good yield. In this article we see then the best apps of which there is an optimized version for iPad, which are also free.


1) Skype per iPad a nice easy and fun interface optimized for the iPad screen. Skype allows you to make phone calls from your tablet and also to make video calls and is a really obligatory app for all tablet owners.

2) The Weather Channel is one of the most popular apps to see the weather forecast graphically in every detail and with beautiful HD images.
However, those who want an weather app can only install the WeatherHD.

3) SkyGo is the application that allows you to watch Sky channels from the iPad and is a must for all Sky pay-TV subscribers, to always have a way to watch football matches or movies, even on the train, at a restaurant or at home of friends.

4) Feedly is an application to read and share content from your favorite websites that can be followed via RSS feed. Feedly is a relatively new app, recommended for Google Reader orphans.

5) Flipboard is another popular app for reading news and keeping up to date on any topic by turning your tablet into a customizable touchscreen newspaper.

7) Search with Google it is much more than just a search engine. With Google Now, you can get different types of information including weather alerts, fastest routes to work, match times, etc.

8) Snapseed is a great photo editing app to which I have a separate article on how to edit photos with fingers on Android, iPhone and iPad

10 ) Amazon, to appear online, browse products, keep track of purchases and search for any type of object for sale in a convenient way, much more convenient than the site.

11 ) Waze, the free and social GPS navigator for mobile phones and tablets, remains an indispensable application even on the iPad, which makes you want to use the Apple tablet as a screen for GPS navigation to control traffic and your movements.

12 ) Calculator for iPad is the free calculator for making quick calculations and also usable as a complete scientific calculator, which is missing on the iPad.

13 ) paper is a great application for allowing you to take notes, sketches, illustrations, drawings and diagrams. You are able to purchase additional tools within the same application.

14 ) Kindle to use the iPad as an Amazon Kindle Ebook reader, buy books online and read them from the screen.

15 ) Daily budget allows you to easily manage your personal finances, keeping all the information of online accounts and cash flows, even with graphs.

16 ) Adobe Photoshop is a program that costs hundreds of dollars and can also be downloaded for iPad, in its official and complete version.
Alternatively, the application Photoshop Express for iPad is free.
It allows you to edit photos with cropping, rotation, color adjustment, adding filters, borders and frames.
SEE ALSO: 20 App to edit photos on iPhone with filters and effects

17 ) Google Earth on iPad is a magnificent app, with the view of the Earth in 3D, large, to travel virtually to all places, even the most remote.

18 ) dropbox is one of the "cloud" apps, such as Sugarsync and Google Drive, which allows you to increase the space of the iPad's internal memory.
The files are saved online in a free internet space and are synchronized with all other devices, mobile or computer.

20 ) My CookBook is the richest application to discover new cooking recipes.

21 ) TuneIn Radio, one of the best apps to listen to music and radio in streaming, from closest and foreign radios.

22 ) OPlayer one of the best, if not the best, apps for watching videos and movies on iPad and iPhone

23 ) TeamViewer, the best free app to access your PC or Mac from an iPad or iPhone, remotely

24 ) Officesuite, the free application to create and open Microsoft Office documents on iPad.

25 ) Official Microsoft Word, Excel and Powerpoint for iPad are three apps released in 2014, complete but free only with limitations.

26 ) DocuSign, one of the best apps to write with your finger or stylus on the iPad screen

27 ) Google Maps per iPad it has an interface optimized for the big screen and is also very useful for downloading maps and being able to consult them offline from anywhere, without internet connection.

28 ) Opera Touch to surf the internet more comfortably from the iPad is a new application which is discussed in another article.

In other articles, i Best 40 XL and HD games for iPad, among which we remember the most downloaded of the year and of all time, Temple Run 2, runner game with very high quality graphics on iPad.

Top 25 free iPad apps, the most useful on the Apple tablet

add a comment of Top 25 free iPad apps, the most useful on the Apple tablet