Your phone's memory is always full so you finally decided to do some cleaning and get rid of all those useless photos from your mobile device. Unfortunately, however, due to a distraction mistake, you have accidentally deleted one of your favorite photos and you are now in a bit of a panic because you haven't made a backup copy and you don't know how to fix it. Don't worry, there's no need to get so anxious, fortunately all is not lost and modern smartphone technology can more often than not put things right.

What am I referring to? Well, the applications that allow you to recover mistakenly deleted photos from the memory of your mobile device. I beg your pardon? This matter is of extreme interest to you and you would like to know which apps I recommend to accomplish this task? Do you own an iOS smartphone and you don't know how to perform deleted photo recovery since it is a closed operating system? Don't worry, in the course of this tutorial I'll clarify all your main doubts about it and I'll talk in detail about what are the applications I recommend to recover deleted photos, both on Android and iOS.

All you need is a few minutes of free time: always keep your mobile device at hand, download and test with me the applications that I recommend, I'll explain how to use them to recover deleted photos, step by step. Having said that, are you ready to start? Calm and cool, you'll see that if you follow my instructions you'll be able to recover the photos you deleted by mistake. I wish you a good reading. 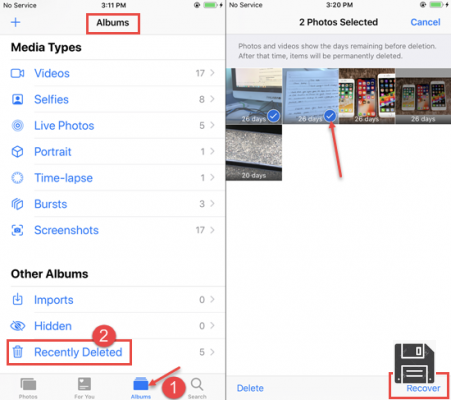 The main method dedicated to restore deleted photos on iOS is apparently also the most trivial and simple of all. You may not know it, but on devices from the bitten apple (in possession of a version iOS 8 or later) deleted photos are not immediately permanently deleted from the memory of the iPhone or iPad.


In fact, in the Photos application there are several albums that contain the photos taken by the device; among them there is also the Recently Deleted album that automatically includes all the photos that have been recently deleted by the user. We could therefore call it a sort of recycle bin in which the images that have been deleted remain in memory for 40 days; once this period has expired, the oldest images are automatically deleted.

As a result, if you've mistakenly deleted a photo on your iOS device and it still hasn't been more than 40 days since it was deleted, you can try to retrieve it via this temporary photo album. To do so, open the Photos app on your iOS device and select the Albums tab from the menu at the bottom. Then scroll down the screen to locate the Recently Deletedalbum.

The image(s) you selected will be recovered and will be back in the source album of the iOS Photos app, as if they were never deleted. 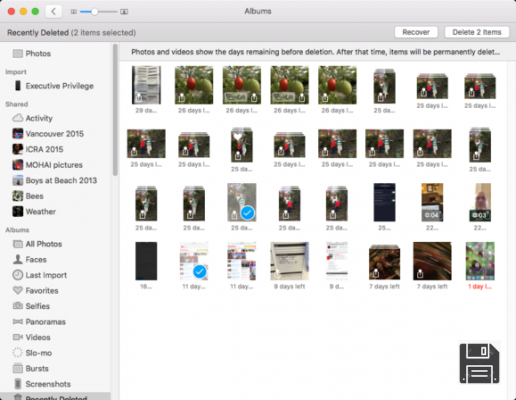 One of the coolest features of iOS is the ability to use iCloud, a cloud storage service that allows you to keep a copy of all the photos you take from your device online.

Being a cloud service like many others, it will be possible to synchronize the photos and make them accessible by all the connected devices. This consequently means that, if you have mistakenly deleted a photo on your iPhone, you can also recover it from your iPad to which the same Apple ID is connected. The iCloud service is therefore very useful both as a backup tool and as a tool to restore from multiple devices.

iCloud is free, by default, but offers a rather limited space of only 5 GB. To take advantage of more storage space you need to subscribe to a paid storage plan. However, it should be noted that iCloud prices are very affordable, as you only need to pay €0.99 per month to get access to 50 GB of cloud storage. The most expensive plan is £9.99 per month and provides 2TB of storage space.

Therefore, if you need to recover deleted photos from your device and want to act from another connected device, you need to perform the same restore procedure from the Recently Deleted album (it's synced across all devices). Alternatively, you can also act from your computer by accessing the official iCloud website via any popular web browser.

In the latter case, all you have to do is connect to the iCloud.com website. Once you sign in with your Apple account login details, you need to click on the Photos app. Similar to what I just explained, you will find that your photo album is fully synced online. Go to the Albums section, locate the Recently Deleted album and the photos you want to recover.


Then click on the ones you want to restore and press the Recover button. This will restore the photos you deleted and return them to their original folder. 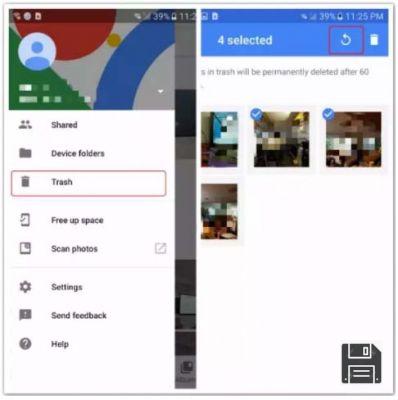 Fortunately, most Android devices also have an automatic photo recovery tool that doesn't require the installation of a third-party app. I'm talking about the Google Photos application, the main tool for managing the multimedia gallery on the main devices equipped with the Google operating system.

The functioning of Google Photos is quite similar to iCloud: this Google tool is also configured as a cloud storage service. The main difference of Google Photos, however, is its ability to have free and unlimited storage space for photos uploaded to the cloud at high resolution. If, on the other hand, you want to store your photos at the original resolution, the free and available space will be 15 GB.

Apart from the main features of Google Photos that I have just told you about, what can certainly prove useful in your case is the Recycle Bin folder through which you can safely recover mistakenly deleted photos.

Consequently, if you use Google Photos for viewing and managing your media, tap on its app icon to open it. To locate your Recycle Bin folder, tap on the(≡) button at the top left and then tap on Recycle Bin from the side menu.

In the Trash folder, locate the photo you want to recover and tap on it to place a checkmark. To restore it, tap on the arrow icon in the top right corner. The image will be visible again in the original folder.

Please note that this can also be done in exactly the same way on Windows and MacOS computers. The Google Photos archiving tool is also accessible from a web browser. Google Photos is also available as an iOS app; you can perform the same steps I've outlined to recover photos you've recently deleted.

The Google Photos app for Android and iOS and Android's Recently Deleted album are the only 100% working methods currently available that, even without a device with root permissions, will allow you to safely recover an accidentally deleted photo.

In the following lines I'm going to talk about other applications for the recovery of deleted photos, but keep in mind that, for greater effectiveness, it may be required a device with root permissions. 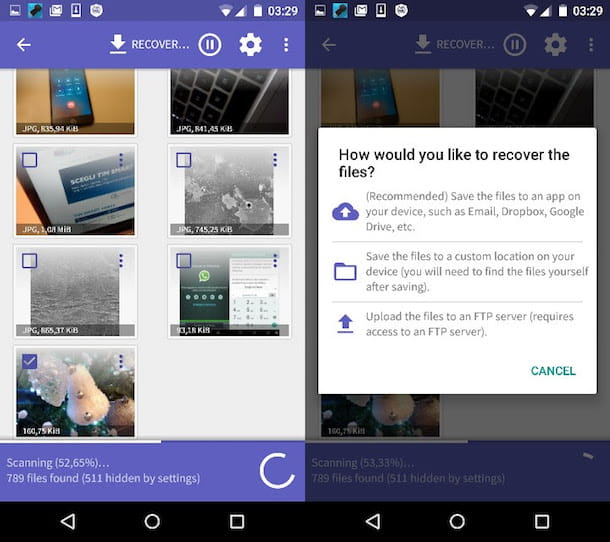 Available only for Android, this is a dedicated deleted photo recovery app that, as you can imagine, works best on devices with root permissions. You can also use it on non-rooted devices though the deleted photo scan will be less thorough and won't always be able to find the deleted photos.

To use it, download the app from the Google PlayStore by pressing the Install/Accept button and then press Open to launch it.

To perform deleted photo recovery using DiskDigger, accept if required that the app has access to your device's media gallery and then press the START BASIC PHOTO SCAN button. Once the scan is complete, you will be offered a thumbnail view of the photos you can recover.

The DiskDigger application performs a scan based on the device's cache memory: if you have recently used cleaning tools such as CCleaner or formatted your device, it will be particularly difficult, if not almost impossible, to recover the photos you have deleted.

If you find the deleted photos, to restore them, tap on the photo thumbnail to check and select them, and then tap the RECOVER button. You will then be asked where you want the media item in question to be recovered (cloud storage service, folder on your Android device, or FTP server). Once you tap on your choice, the photo will be restored to the folder or service you specified.

Other apps to recover deleted photos

If your goal is to recover deleted photos from an Android or iOS device, what I suggest you do is to use software, rather than an app for recovery. In fact, I have suggested you a list of useful programs for this purpose in my guide titled "how to recover photos". 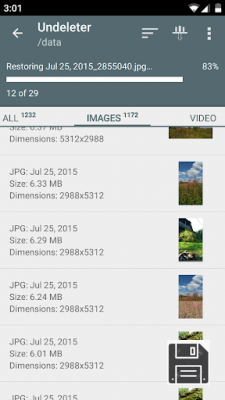 Alternatively, below you'll find the suggestion of two other applications that can help you with the recovery of files directly on your smartphone

How to Recover Deleted Android Videos

96%
We have been able to provide in 96% of times, the solutions that users were looking for when consulting our page.