Have you accidentally deleted some photos that were saved in your smartphone's Gallery and are you despairing over it? This is not the case! You should know, in fact, that there are applications that allow you to recover the photos that you may have deleted from your device in a simple and, as they say, painless way.

If you're interested, go ahead and read this tutorial focused precisely on the subject. In the following lines, in fact, you'll find those that, in my humble opinion, represent the best apps to recover photos, available both for Android and iOS/iPadOS. They are not difficult to use, I assure you.

The only thing you have to keep in mind is that recovering deleted data is feasible, but you also need a bit of luck and to act promptly. In fact, if the images you want to recover have been removed too long ago, you may no longer have that opportunity (as the portions of memory that housed them may have been occupied by other data or the automatic cloud backups may have been deleted). Now, however, enough chatter and let's take action. Happy reading and good luck!

Apps to recover photos from Android

If you're using an Android smartphone or tablet, the photo recovery apps you can rely on are the ones listed in the following steps. Put them to the test now. I sincerely hope they are able to help you. 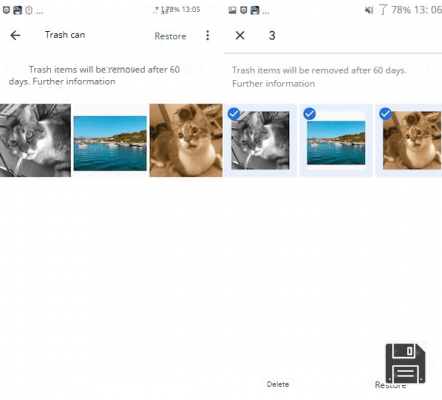 GooglePhotos is the app for Google's homonymous service, which is designed to automatically back up the images (and videos) in your Gallery online. It's installed as standard on most recent Android devices (and if not, it can be downloaded from the relevant section of the Play Store) and I'm pointing it out to you because it integrates a special section where photos that are removed from albums are stored for up to 60 days.


So, if you've deleted certain images by mistake and the recovery deadline hasn't passed yet, you could try looking in this Recycle Bin and see if the files you're interested in are still there, to restore them.

To do this, launch Google Photos on your device by selecting theapp icon (the one with the coloured pinwheel) in the drawer, then tap on the button with the three horizontal lines at the top left and, in the menu that appears, select the Trash item.

If there are deleted photos in the Recycle Bin that you want to recover, tap on the button with the three vertical dots at the top right, choose the Select option from the menu that appears, select the images to be restored, and tap on the Restore button at the bottom. The photos will then be visible again in the Google Photos gallery.

Please note that, on some Android smartphones and tablets, the same operation can also be done using the Gallery app, the default app for viewing and managing images. On some devices, in fact, the latter integrates a feature similar to that offered by Google Photos. Unfortunately, I can't give you more precise instructions on what to do, as I don't know the exact model of your smartphone or tablet. 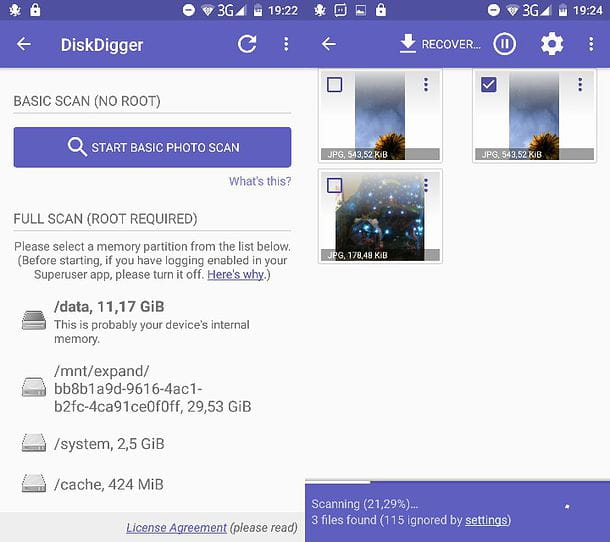 If, as I mentioned in the previous step, you weren't able to find the deleted photos you wanted to restore, I suggest you use DiskDigger.


It is an app that allows you to recover any kind of deleted files. It works with both internal memories and SD cards, and it doesn't require root (if you don't know what that is, read my guide on the subject, to learn more), although unlocking the device in this way helps you to recuse more data.

To download the application to your device, visit the relevant section of the Play Store and tap the Install button. Then launch it by tapping the Open button that appears on the screen or by selecting the relevant icon that has been added to the home screen or drawer.

Now that you see the app's main screen, grant it root permissions (if you've unlocked your device), refuse to switch to the paid version (by tapping on No, thanks) and select the memory to be scanned item.

Next, place a check mark next to the JPG and/or PNG entries and tap the OK button to start the scanning process. Once the scanning process is over, select the thumbnails of the photos you want to recover, click the Recovery button at the top of the screen and tap the folder symbol to export the images to any location, or the cloud symbol to save them to one of the supported cloud storage services. 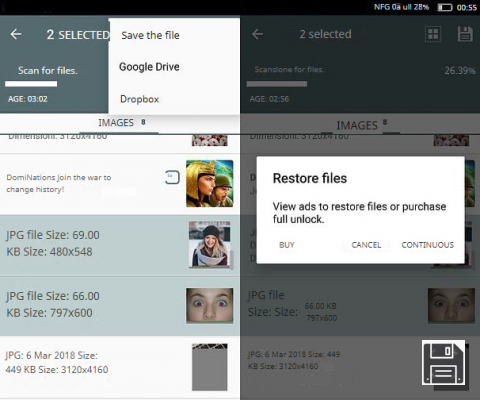 Undeleter Recover Files & Data is another app to recover photos on Android that you should consider. It works in a similar way to DiskDigger, but it's a bit slower in finding files. However, it is still perfectly capable of fulfilling its purpose. It's free, but you can only recover photos. If you want to recover documents, archives and other types of files (which I don't think you're interested in right now) you'll have to upgrade to the paid version, via in-app purchases (at a base cost of €3.19). Even then, the app works without root, but on unlocked devices it's able to give its best.

To download the app to your device, visit the relevant section of the Play Store and tap the Install button. Then launch the app by tapping the Open button that appears on the screen or by selecting the relevant icon that has been added to the home screen.

Now that you see the main screen of Undeleter Recover Files & Data, tap on the Next button and then on the Grant button, in order to grant root permissions to the app (if you have unlocked your device). Next, tap the Next button again and indicate whether you want to recover images from the device memory or from the SD card. Then specify the file types you want to restore(JPG and PNG) and tap the Scan button.

Once the scanning process of your smartphone or tablet is complete, the photos that can be recovered will be shown to you as thumbnails. To restore the ones you're interested in, tap on them, press the button with the three vertical dots at the top right, and select Save File from the menu that appears.

Apps to Recover Photos from iOS

If you're using an iPhone or an iPad, I'd like to inform you that, due to the restrictions imposed by Apple on its operating systems for mobile devices, there are no apps to recover photos from iOS/iPad as for Android, i.e. able to "dig" into the memory of the device.

However, taking into account what I've just said, what you can do is to appeal to Gallery management apps that integrate Baskets, where deleted photos are available for a limited period of time. Read on for more details. 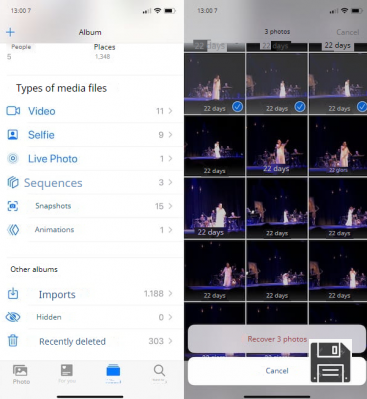 Photos is the default iOS/iPad app for saving, viewing, and organizing photos and videos. Not everyone knows this, but it also offers a special feature that allows you to recover photos that have been deleted less than 30 days ago, retrieving them from the section where they are transferred before being permanently removed, which is why I've chosen to tell you about it in this guide.

That said, if you want to see if the recently deleted images in the Photos app also include the photos you're interested in, proceed as follows: open the app on your device, touching the icon (the one with the white background and the multicolored flower) that you find on the home screen, then select the word Album located at the bottom.

Scroll down to the bottom of the screen that is now displayed, locate the Other Albums section, and tap on Recently Deleted. Then take a look at any recently deleted photos that may be in this section.

If you find the pictures you were interested in restoring, tap on the Select heading in the top right-hand corner, select the preview of the photos you are interested in, and tap on the Recover heading at the bottom. Then confirm your intentions by clicking the Recover Photos/Recovery N photos button that appears on the screen. Afterwards, the images will be visible again in the Gallery. Done! 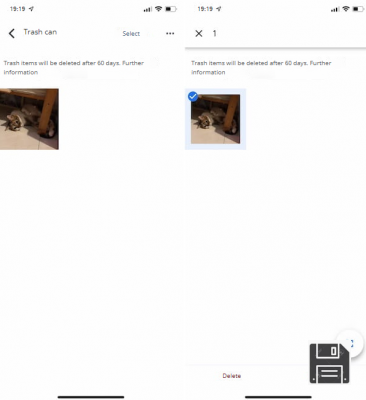 Google Photos, the app I mentioned in the step at the beginning of this guide regarding the Android side, is also available for iOS/iPadOS and also in this case it offers a feature that allows you to recover deleted photos from your device within 60 days of their final deletion.

On iPhone and iPad, however, the application is not pre-installed. In this specific case, it must first be downloaded from the relevant section of the App Store. Then, once you launch the app on your device, the steps to recover photos from the Recycle Bin are the same as those seen together for Android, nothing changes at all. 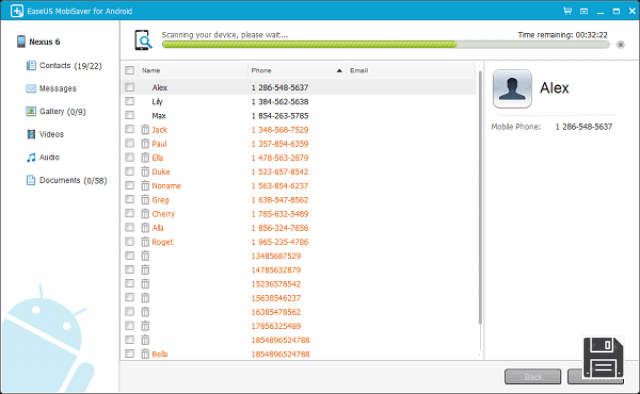 Are you unable to recover photos from the Recycle Bin using the apps I mentioned above or are you looking for an alternative? Under the circumstances, I'd like to point out that you can also use some computer programs that specialize in recovering files from mobile devices by connecting your smartphone or tablet to your PC via a cable, such as Dr.Fone and EaseUS MobiSaver.

If you're interested in this, you can check out my review of programs to recover deleted photos and my tutorials on how to recover photos on Android and mobile data recovery.

How to recover deleted videos from WhatsApp Android

Add a comment from Apps for Photo Recovery Android - Ios

98%
We have been able to give 98% of times, the solutions that users were looking for when consulting our page.

This work is under a Creative Commons Attribution-NonCommercial-NoDerivatives 4.0 International License. 2022 / fordatarecovery.com
X

How to Recover Deleted Photos from WhatsApp on Android