How to open PS4 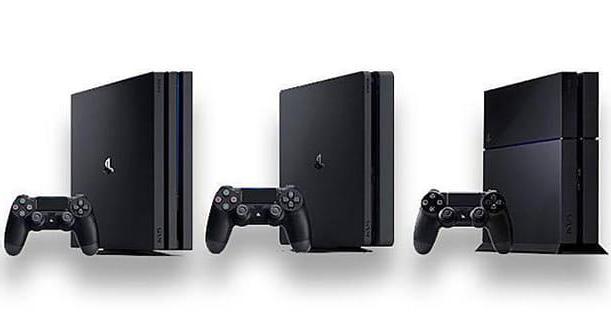 Before we proceed and show you how this is possible open a PS4, I would like to give you some preliminary information in this regard.

As I told you before, with the passage of time even a PS4 needs maintenance, which can be useful to solve problems of dirt or technical failures. If, therefore, you feel that the console is overheating or that it produces suspicious noises, know that it is necessary to intervene.

What you need to know, however, is that by carrying out these operations, or by physically opening the console, unfortunately you will go to void its warranty. This means that, in the event of a breakdown, the console can no longer be taken over by Sony support, or by the retailer from which you purchased it. The only thing you can do about the console's internal hardware without voiding the warranty is to change the hard drive.

If, despite this, you are still convinced to continue, be sure to implement all preliminary operations necessary to do a good job. Before opening the PS4 first make sure the console is extinguished and therefore it is not simply in rest mode: if you have any doubts, or do not know how to perform this check, read my article where I explain how to turn off the PS4. Then make sure to unplug the power cord and HDMI cable connected to the TV.

Also, to open the PS4 you need to know that you will need the right equipment: a T8 screwdriver o T9 it's a Phillips screwdriver with 3 mm tip.

The last thing left for you to do before opening the console is to place the PS4 on a plane dry e clean, in order to operate in the best conditions. I advise you to use a microfiber cloth. Having made these necessary premises, I would say that the time has come to continue and understand how to open the PS4.


How to open PS4 Fat 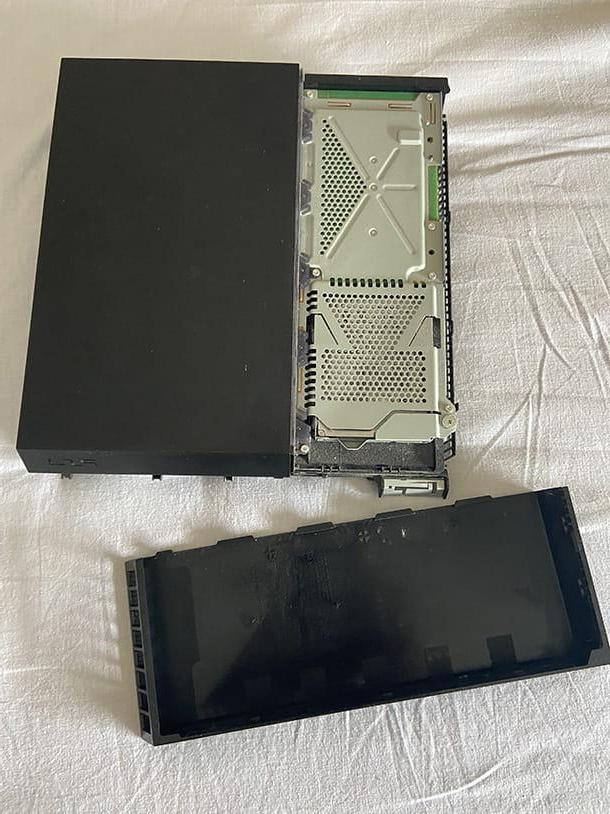 If you have one PS4 Fat, i.e. a PlayStation 4 first model, here's how you need to proceed.

The first thing to do, after taking care of disconnect the PS4 from each cable as I told you earlier, is to remove the shell covering the hard disk, pushing it and then sliding it outwards. If you want to extract thehard drive from its slot, remove the screw placed at the bottom left. Next, flip the PS4 over and locate the i four rectangular shaped stickers located on the back of the console.

Then remove the adhesives possibly helping you with a cutter (I remind you that removing the four stickers will permanently invalidate the warranty). Once this is done, remove the newly discovered screws by helping yourself with the T8 / T9 screwdriver, then remove the shell applying a little force and sliding it gently. 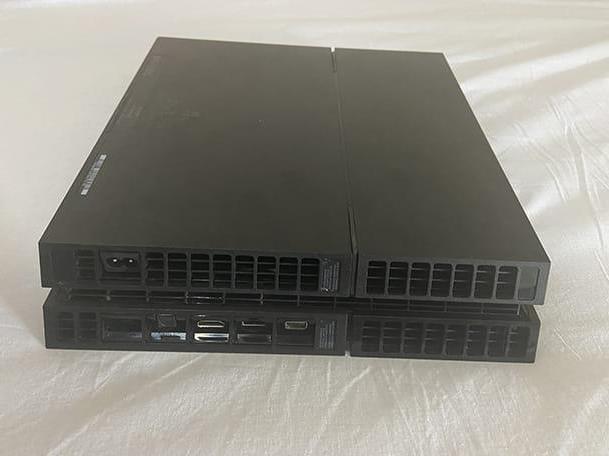 At this point, flip the PS4 again to remove the last one shell remained. Then extract the two screws with T8 / T9 screwdriver and, applying a little force, raise the shell and then slide it. Now, by flipping the console over, you will have access to the fan (of which you can check theintegrity and cleaning) andpower pack. To remove the latter, you need to extract in total five screws: two classic crosses placed at the corners, and others three: to be removed with the T8 / T9 screwdriver placed at the edges.

Proceed, therefore, with the removal of the screws (taking care not to lose them) and extract, applying a little force, thepower pack. In this regard, I invite you to pay attention to the connector, on your right, which you can disconnect (with the help of pliers) as soon as you have removed the power supply. 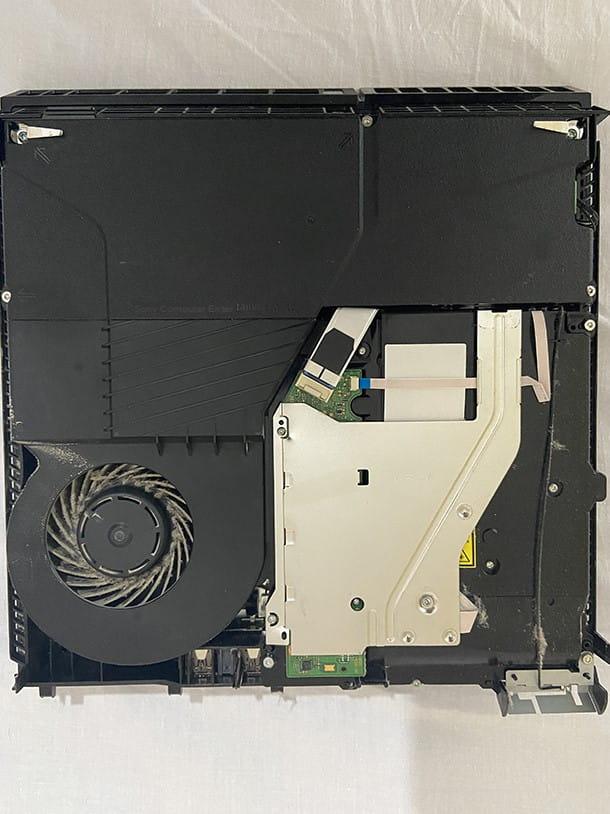 Once the power supply is removed, you will need to take care of the Blu-Ray player of the console. I warn you that this is a very operation gentle, as a damage to the optical reader could compromise the correct one operation of the PS4. If you need a visual reference, I recommend watching a video on YouTube made by TronicsFix (in English, but very easy to follow for everyone) regarding the procedure for disassemble the player.

So what you need to do is unplug the two Molex cables, first the color one black (the largest so to speak) and then the color one blu. The extraction of the two cables must be done extremely gentle, disconnecting them with small movements and avoiding abrupt maneuvers. Subsequently, with the help of a pin, unplug the cable placed below the first Molex type you have disconnected (the one in color black). Now all you have to do is remove the four screws placed in the corners of the reader, by fitting the T8 / T9 screwdriver.

I advise you to do pay attention to the screw located in the lower right corner of the reader, as it helps to keep the Wi-Fi module, connected with the thin black cable passing over the Blu-Ray player. Once the screw has been removed, in fact, you will have to move the cable with the module, removing it from above the reader.

Then proceed with removing the other screws placed at the corners and, finally, the last screw positioned on the bottom edge. Once these operations have been completed, you can finally remove the reader from its housing.

Now, if your intention, in addition to checking the health of the console components, is to clean the PS4, follow the instructions I gave you in my tutorial on the subject.

reassemble each single component, afterwards, you will simply have to carry out the same steps backwards, always taking care not to damage any component and to insert all the screws in the correct way. Once all the operations are finished, when you have to connect the appropriate cables again, I suggest you also read my guide where I explain how to connect the PS4 to the TV, in case you have any doubts about it.

How to open PS4 Slim

If you have one at home PS4 Slim, I inform you that the procedure to be implemented to open this version of the Sony home console has variations compared to that of the PS4 Fat. To have a visual reference and follow each step in detail, I recommend watching a video tutorials on YouTube, like that of TronicsFix (in English but very understandable even for those who do not "chew" the language in question).

In this case, the first thing you need to do is to flip the consul and remove thesticker covering the screw, to be extracted later with a T8 / T9 screwdriver. Then remove the plastic next to the adhesive covering the hard disk screw, pushing it outwards. Once this is done, you will need to remove the rear body, applying a little force on the edges (one at a time) and sliding it gently.

Next, flip the console over to remove the front body levering the edges again to lift it. As you have surely noticed, unlike the PS4 Fat, in this case you will not have to extract any screws as regards the shells, which must be removed completely by hand. Once removed, therefore, also the front body you will find underneath thepower pack, the fan and optical reader.

To have access to the fan and optical reader, you will have to remove the metal plate placed on top, extracting the necessary screws and lifting it, always being very careful. If you have any doubts or want some visual help, watch carefully the video I recommended and you will see that the operation will be even easier!

How to open PS4 Pro

If your interest is to open one For PS4, then I announce that the operation is quite similar to that concerning the PS4 Slim. To remove the front cover, all you have to do is lift it in each of the two front corners (one at a time) applying a little force. In this way, I assure you that remove the front body it will be child's play and you will immediately have access topower pack, To fan and optical reader.

Also in this case, to get a clearer idea of ​​what to do, I recommend the vision of a video tutorials on YouTube, like that of TronicsFix (always in English) in which it is perfectly explained how to open a PS4 Pro.

How to open PS4