Among the many popular features of OS X, there is certainly the ability of the Apple operating system to wake the computer from standby in an instant. It may happen, however, that closing the laptop screen does not command standby correctly and, the next time you wake up, you will discover that the Mac has consumed the battery, perhaps with the fan running for hours. It may be useful to proceed with the reset of the System Management Controller, SMC, but this procedure is valid only for Intel processors. And if that were not enough, it could be the turn of the PRAM. 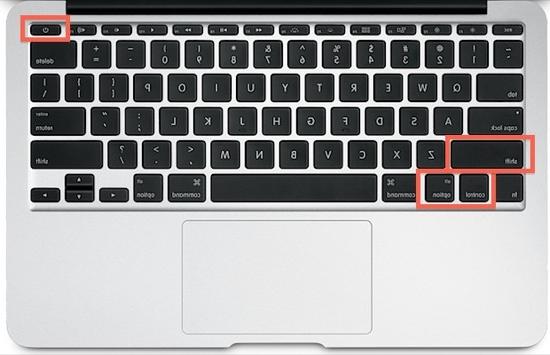 The SMC reset is particularly suitable in the following cases:

Pproblems in lighting management: The display backlight does not change with the ambient light, the keyboard illumination does not work.

External video and display: the external display does not work, does not activate immediately.

If your Mac is having problems with one of these cases, and it is an Intel-based model, you should try resetting the SMC controller with a very simple maneuver. The maneuver is valid for the MacBook, the Pro, the iMac and the Mini, but with some differences.

In the case of a MacBook with battery Removable:

In the case of a MacBook with battery sustainability:

Turn off the Mac
Connect the power supply
On the keyboard, hold down the keys at the same time Shift + Ctrl + Option + power button (as shown in the figure)
Release all keys
Turn on normally.

In the case of an iMac or Mini:

Turn off the Mac
Unplug the power cord
Press and hold the Mac power button for 10 seconds
Release the button
Reconnect the power cables and start the Mac normally.

If these steps did not correct your Mac problems, you may want to proceed with resetting the PRAM, that is the RAM that records all the parameters of the Mac. In this case the Apple support reports the problem to be in the battery of the computer if the parameters are lost at each restart. So the SMC + PRAM combination can be quite effective.

The following information is generally stored in the PRAM memory:

A reset of the PRAM resets all parameters to their default values, including the system date. Reset is operated as follows:

Internet Smart TV problems how to reset the connection ❯

How to reset / reset your Mac and reinstall MacOS

macOS Monterey includes a new option to reset the Mac

add a comment of Problems with Mac standby? Let's reset the SMC - Help