Although in the Windows environment Safari is probably the worst browser, the speech is not valid (indeed it is probably the opposite) for those who use a Mac. Fast, reliable and with a choice of extensions that, albeit small, grows regularly, Safari on the Mac is entails admirably. But it can happen that he gets tantrums; maybe it seems very slow to you (and believe! It doesn't have to be! ed) or it does something strange, as we will see later. Today we see the most drastic solution to solve the rare problems that can afflict the Apple browser or uninstall and reinstall it. And as you will see, getting there was anything but easy.

By way of pure curiosity, the reason why we asked ourselves this problem is that one day we noticed that, choosing Preferences from the Safari menu and going to the Extensions panel, before our eyes it was this: 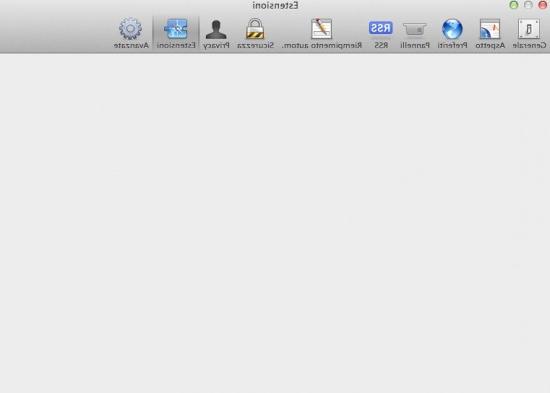 A uniform gray that had taken the place of this one, which is how the panel normally should be: 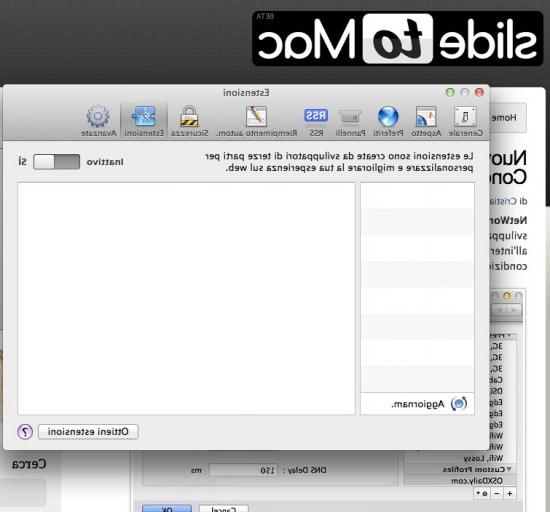 After making the usual attempts to fix it in a simple way, such as closing all the other apps, restarting Safari and restarting the Mac to no avail, we moved on to things a little (but just a little) more complex like emptying the cache and reset Safari (from the Safari menu in the menu bar); also in this case: nothing. Our tab (solid gray) didn't want to go back to normal.

And oh well, what will it ever be? Desperate times call for desperate measures. It will mean that we uninstall Safari and then we download it from the Apple site and so we find it brand new. And here we understood that it would have been less simple than expected: if in fact you try to drag Safari.app (with the application obviously closed) from the Applications folder to the Trash (we are talking about Leo, we repeat) here is what happens:

In fact, someone (Maurizio) had told us that Safari was strongly intertwined with Lion; let's try a more drastic solution, that is, we eliminate Safari using AppDelete; we have done this procedure with some peace of mind for three reasons:

And indeed with AppDelete we can completely remove Safari. So let's go to Apple.com with another browser and there is a little doubt since the page dedicated to Safari, this: 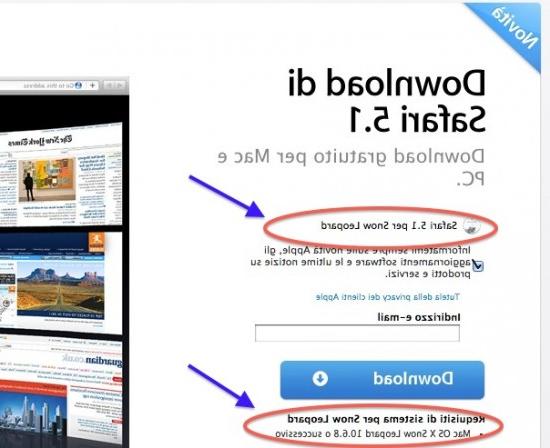 How is it that Apple's download site doesn't mention Safari for Lion? Boh ?!

However, we download the browser, mount the .dmg and at the time of installing it we discover that “This” safari 5.1 is not compatible with our operating system but only with Snow Leopard. So Safari is so integrated and "intertwined" with Lion that it cannot be considered as an application "in itself" but goes hand in hand with the operating system. Thanks to AppDelete we easily recover our version (albeit "corrupt") of Safari and we are back to square one.

A friend (Centaurx) intervenes and suggests another method to reinstall Lion's Safari. Which? Simple: if we had the foresight to save the installation copy of Lion, InstallESD.dmg (here you will find how to do it ... if you still have time) just look for the file in packages Safari.pkg, and launching it will reinstall the browser.

Too bad that the writer did not have this foresight. The usual friend then gives us (goodness of him) the file Safari.pkg and we also make this attempt. But even in this case the result is unsuccessful: launching the .pkg without uninstalling Safari first does not actually install the installation (a bit as if the system told us “what do you want to install if you already have Safari?”); removing it first with AppDelete and then launching safari.pkg the installation is successful, so much so that when Safari is opened the Wellcome page also appears! Full of optimism we go to Preferences, Extensions and… all gray.

What is missing? At this point we are left alone time Machine. So let's go into TM and try to restore Safari from the backup of a day when we were sure we used the Extensions tab (which therefore worked regularly); but the result is a bit like trying to remove it by dragging it to the trash: Safari is necessary for Mac OS X and therefore cannot be removed or modified, even if Time Machine wants to make this "modification".

Only one last thing remains: in order, uninstall Safari with AppDelete (or with one of the many similar apps, even free), and restore it from Time Machine. And this time it works! We are given back a Safari which at first seems "confused" because it opens with the Wellcome screen as if it were brand new but at the same time keeps all the favorites but none of the extensions we had previously installed; never mind, the Extensions tab finally works and so we can quickly put them back.
Why did it work with this last method and not - for example - reinstalling it with the .pkg? We don't know how to explain it.

Ultimately we have seen how Safari is now an integral part of Lion and no longer an application in its own right. In our opinion this contributes on the one hand to making the Apple browser extremely performing and on the other hand it makes it subject to a few bugs too many that will probably be corrected with the next updates.

We must say that, even looking on the official Apple support forum, we did not find other cases like ours, but this procedure could be the solution to excessive slowness or some other small bug that Safari cannot be solved with the most trivial remedies ( we always recommend making a backup before anything else and, if you use applications like AppDelete, jealously keep the folder containing what is removed from the app to return to the starting point without too many problems).

So summarizing these are the three simple (now that we know them) steps to follow:

And now we leave room for you. We would like to know if you have encountered any other quirks in Safari and - if so - how you have addressed and solved them.

How to reset / reset your Mac and reinstall MacOS

macOS Monterey includes a new option to reset the Mac