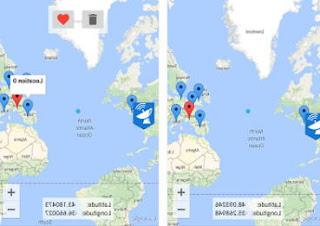 In this guide we see how it is possible to make an Android smartphone detect one geographical position different from the real one. Basically you go to fake GPS so that apps used on your phone, such as Google Maps or Facebook, think we are somewhere other than our current location.
This ability to fake the GPS of the Android phone is also a way to hack Pokemon GO game or similar games, so that you can look in other places without moving from home.
There are different applications to fake the location on the Android mobile, no need to root Android.

ALSO READ: How to check Google Maps history and disable it

Before installing an app that spoof GPS, you need to change an Android system option.
At some point it will ask you to activate an option in the Android developers menu that is essential to make it work and fake the GPS of the smartphone. If not active, go to Settings, go to About phone and tap 5 quick times on the Build number line. This will bring up developer options in Android Settings. Then open the developer options, scroll down and find "Select mock location app. Tap and select Fake GPS. Accept the latest warning and your phone is ready.

1) Fake GPS Location it is the most popular and simple of its kind, which also works if the phone is not root unlocked.
After installing it, open the app and activate the required permissions. You will then be asked to activate the GPS (in the geolocation settings do not use high accuracy but only GPS or device only) on the phone and deactivate the Wifi.
It will now be sufficient to tap a point on the map twice quickly, by double-tapping, to fix the GPS detector on a point by falsifying it. Alternatively, you can search for a city or address by tapping the magnifying glass icon. Press the orange key to activate the false position. To try, open Google Maps and verify that the detected location is the one selected which can be in the USA, New Zealand or any other country. To stop the fake GPS and go back to detecting the correct position, open the Fake GPS app and press the Stop button at the bottom (which is the same Play button). To do this first, pull down the notification bar and tap the square next to the FakeGPS notification. This app lacks the ideal joystick function for gaming.

2) Fake GPS Location Spoofer Free is another app where you just drag the map marker to the position where you want to view your phone and hit the green Play button in the bottom right corner. The "Pause" button in the left corner stops it. It also offers the possibility to search for an address. Here too it is important that the Android developer options are unlocked.

4) Fake GPS Location Professional is an app for use with location-based games, which works by moving a joystick to control your movement in the real world.

5) Fake GPS is a quick and easy app to use to fake your position in the world, even if it doesn't work with Pokemon Go and other games.

6) Fake GPS Location: Joystick and Routes allows you to set the GPS to a certain position and then use the joystick to move the device by pretending to move at different speeds.

7) Location Changer - Fake GPS Location with Joystick, a little more complex to use, but that does a great job of making GPS movements real and even pretending to be traveling or walking a preset route.

How to reset UEFI BIOS ❯

What to do if the Bluetooth does not connect

Use the Mi Band to unlock your mobile automatically

How to reset the TV (Android, Samsung, LG, Hisense)

Restart Android if your mobile or tablet appears to be dead