Which is better between Firefox and Chrome? 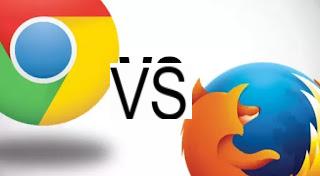 One of the hottest technology debates ever is that of best browser and, in particular, that tra Firefox e Chrome. In recent years this comparison had lost much of the interest because objectively no one could say that Firefox was better than Chrome, clearly the number one both for speed and for features. For a few years, however, Firefox has caught up a lot by producing a cutting-edge browser, especially for users who care about security and privacy.

It is therefore worth returning to this discussion and showing you in this guide the key features of the latest versions of the Chrome and Firefox browsers, without forgetting what for many is the key factor of choice: the loading speed of Internet sites.

Summarizing the advantages and defects of both browsers is not easy, for this reason we have carried out an analysis divided into chapters, so as to be able to fully evaluate the advantages of one or the other browser and choose which one to use every day.

Google went to great lengths to make the appearance of Chrome and make it feel cleaner and more comfortable for the user than they were, until then very thin and gray. From this point of view Firefox has improved a lot, offering an easy-to-use interface, even if it is actually becoming a copy of the Chrome interface (like all modern browsers now).

Firefox, however, offers the possibility to change the main interface, the buttons displayed and the behavior of the browser thanks to numerous customization options (absent in Chrome).
Do not forget that Firefox can be customized in every detail thanks to Firefox about: config options.


Chrome and Firefox for developers

There are many sites that tend to recommend Chrome to their readers because the developers and designers of those sites most likely use Chrome as their primary browser.

This it doesn't mean that Firefox is less practical for developing websites: the latest version of the open source browser improves the developer console by making it the same level as that of Chrome, equalizing the comparison on this very important point. In fact, using Firefox or Chrome to develop on the web doesn't change anything!

Chrome has so many extensions and has a much more organized site in which to look for them.
Firefox, which for years has been the number one browser for extensions, has undergone a revamp that made it much easier and more immediate to develop and install extensions (without reboot), equalizing the advantages that Chrome offered from this point of view.

Chrome syncs everything what you do in the browser via Google account, so you can also find it on other computers but also on Android tablets and smartphones, iPhones and iPads. Of course, you need to use Chrome everywhere to get this advantage.

Chrome makes it easy to sync everything with a Google account while synchronization on Firefox requires an account to be registered on the Mozilla site. Chrome is also great at managing multiple sync profiles while in Firefox syncs for one account only.

Firefox is currently the best browser because it cares a lot about privacy, also because Chrome has always been suspected of collecting data on users on behalf of Google, which would use them to better target advertising.

In addition, Firefox, in the latest versions, has tracking systems and suspicious cookies (blocks spying sites), has an account violation verification system and also suggests when it's time to change a password that is easy to guess. , so as to significantly increase security when we surf the Internet.
Although Chrome uses site control systems currently Firefox is definitely safer on the privacy side and as a tool to fight hackers.

As for stability, there is a certain balance between the two contenders.
The problem arises when you have many tabs open, both Chrome and Firefox tend to occupy a lot of memory by immobilizing the computer and crashing. While Chrome is greedy for computer memory, Firefox certainly remains lighter.

In other articles, to mitigate these problems, we have seen the Firefox extensions to decrease RAM memory consumption and how Suspend inactive Chrome tabs to save memory.

As for the speed, you can do all the measurements by going on browser benchmarking test sites.

Chrome is certainly faster di Firefox a load Google sites and sites that contain streaming videos ma Firefox (without extensions) gets along very well, loading non-Google sites and sites composed mostly of text and images at a very high speed.
It cannot be said that Firefox is absolutely faster than Chrome, but certainly the previously existing gap (in favor of Chrome) has narrowed in recent years.

Any browser is good for surfing the internet, but the choice of which one to use depends on what you do. If you browse the internet passively, without ever writing anything and browsing only on Facebook or news sites, then using Firefox or Chrome doesn't change anything.
If, on the other hand, you work with the browser by opening many web applications together, actively participating on multiple websites, keeping many extensions useful to facilitate the task, then the choice between Chrome and Firefox is entirely personal.
Without any doubt the overwhelming power of Google as a search engine, as an Android developer and as a provider of various services including Gmail, YouTube and Google Maps, brings Chrome to be the natural gateway to the web and the ideal operating system to keep all your online activities together.

If we want to compare Chrome and Firefox with other browsers that can be used by PC, we refer you to reading our guides Best browsers compared: Chrome, Firefox, Edge, Safari and Opera e Microsoft Edge compared to Chrome and Firefox.

Which is better between Firefox and Chrome?

Audio Video Which is better between Firefox and Chrome?
Best Camera App for iPhone ❯

add a comment of Which is better between Firefox and Chrome?