WhatsApp ephemeral messages: what they are and how they work

What are ephemeral messages WhatsApp 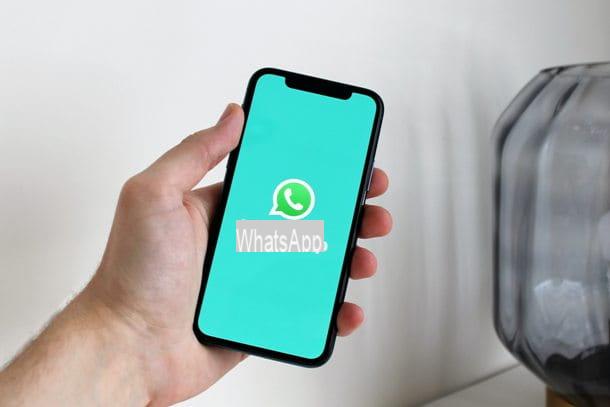 Let's dive right into the topic and see what are the ephemeral messages of WhatsApp. As I already mentioned in the introduction to the article, that of ephemeral messages is nothing more than a setting by which it is possible send temporary messages in the popular messaging app.

When the option of ephemeral messages is activated, these they disappear after 7 days. Within a single chat, one of the two participants can activate and deactivate the function at will; in a group chatinstead, only the administrators have the possibility to do so.

Keep in mind, however, that themessage preview may still be visible in notifications until the user opens WhatsApp (if he has not done so for 7 days). Also, if you reply to an ephemeral message quoting him, this could continue to be visible even after 7 days from its dispatch. The same is true if an ephemeral message comes forwarded to another conversation where this setting is not active.

When a user makes a backup of their WhatsApp chats and includes an ephemeral message that has not yet disappeared, as less than 7 days have passed since it was sent to the time of the backup itself, it will be deleted when it is restored.

Furthermore, the messages posted on WhatsApp, even if "ephemeral", they could be saved by a user in various ways, for example with a simple screenshot. So don't "trust" this setting too much and always be careful what you reveal in your conversations, especially when chatting with people you don't know well.

As regards the multimedia files, if these are sent to a chat where the setting of ephemeral messages is enabled, they will come deleted only if you have turned off the automatic download setting of the same.


Another aspect that I want to emphasize is that if you enable ephemeral messages on a chat, it will be reported by WhatsApp within the same and, therefore, the other user will immediately notice that the setting has been activated.

Having clarified these aspects, I would say that now we can also see how the setting of WhatsApp ephemeral messages is activated. Find everything explained below. 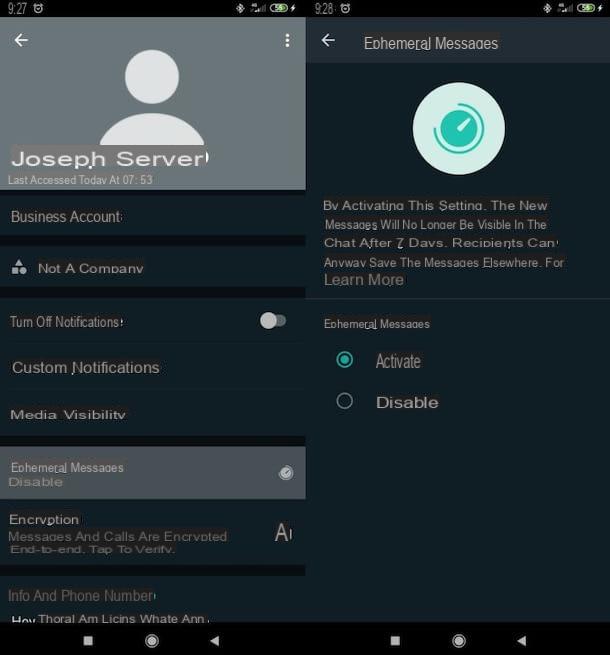 If you have a device Android and you want to know how WhatsApp ephemeral messages work, I'll settle you immediately. Basically, all you have to do is open the chat of your interest, go to its settings and activate the option relating to ephemeral messages.

Chats on which the ephemeral message setting has been activated are marked with a symbol stopwatch at the profilo's photo present nella schermata Chat of WhatsApp, as well as in the conversation itself.

New messages that you send in chats on which you have activated the setting in question will disappear after 7 days. As I told you, these could still be visible for the reasons listed in the opening chapter.

If you want to retrace your steps and disable the setting relating to ephemeral messages, you can do so by going to the chat settings of your interest (to do so, follow the steps I have just indicated) and select the option Deactivated present under the heading Ephemeral messages. 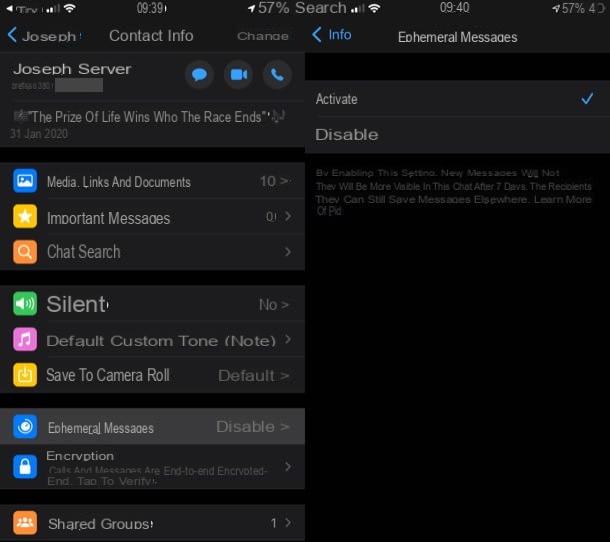 Do you want to know how ephemeral WhatsApp messages work on iPhone? Well, they basically work like they do on Android. To proceed, therefore, open the official WhatsApp app, tap on the tab Chat at the bottom right and touch the chat on which you intend to act.

After opening the chat in question, tap the contact or group name (if you are an administrator) located at the top of the screen, so you can go to the section of Info, and press on the wording Ephemeral messages located a little lower. At this point, to activate the setting for ephemeral messages, all you have to do is tap the option Get activated. Più semplice di così ?!

Conversations on which the setting for ephemeral messages is enabled are characterized by the presence of an icon stopwatch at the profilo's photo present nella schermata Chat of WhatsApp, as well as within the chat itself.

The new messages that you send in the chats on which the setting is active will disappear after 7 days, even if as I explained to you in the opening chapter, the user could somehow save the ephemeral messages and view them even after their disappearance.

In case you want to restore the default settings on a certain chat, all you have to do is go to the settings of the same (as I showed you a moment ago) and select the option Deactivated present nella schermata Ephemeral messages.

I conclude this tutorial by explaining to you how ephemeral WhatsApp messages work on PC, since the setting can also be activated by acting on Web WhatsApp and WhatsApp desktop client.

After logging in to WhatsApp via WhatsApp Web or the WhatsApp desktop client (if you don't know how to do it, take a look at the guide in which I explain how to do it), select the chat on which you want to activate the ephemeral messages using the bar on the left.

I remind you that the chats in which the function relating to ephemeral messages is active are characterized by the symbol of stopwatch at the profilo's photo present nella schermata Chat of WhatsApp, as well as within the conversation itself.

The new messages that are sent in the chats on which the setting in question is active disappear after 7 days, but as I have already explained to you in the opening chapter, these could still be visible for various reasons.

If you want to disable the function of ephemeral messages for a certain conversation, go to the settings of the latter, following the instructions I have given you a moment ago, and select the item No sotto the dicitura Ephemeral messages.

How to send self-destructing photos and videos on WhatsApp 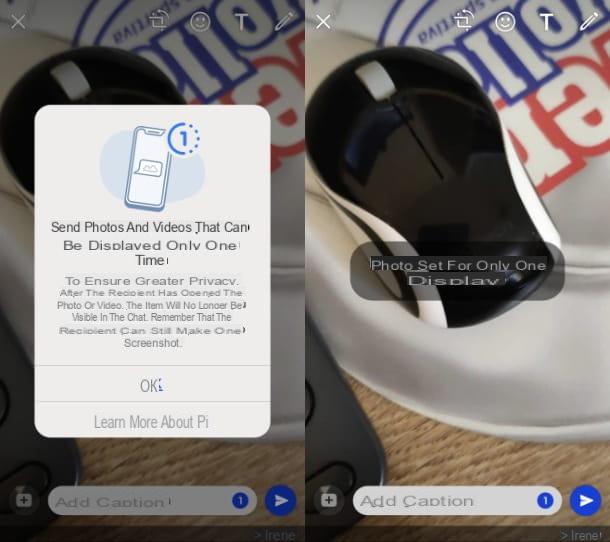 In addition to the ability to send self-destructing text messages, WhatsApp has a feature that, called View once, allows you to set the automatic deletion of sent multimedia files, after they have been viewed by the recipient.

The tool in question can be used quickly and easily via the WhatsApp to Android e iOS, but also from a PC, using the WhatsApp client for Windows / macOS or using WhatsApp Web.

To get started, choose the media item you want to send in the chat by selecting it from gallery of your device or use thecamera icon, to take a photo or video of the moment. Once this is done, in the sending preview section, click on button (1) in order to activate the self-destruction of the image or video. Finally, press onairplane icon, to send the photo or video in the chat.

For more information, read my guide dedicated to how to send self-destructing photos and videos on WhatsApp.

WhatsApp ephemeral messages: what they are and how they work

Audio Video WhatsApp ephemeral messages: what they are and how they work
N26: what it is and how it works ❯

add a comment of WhatsApp ephemeral messages: what they are and how they work