Download Kaspersky for free, full free version of the antivirus 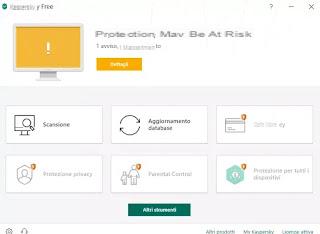 Kaspersky is the name of one of the most used antivirus in the world and also one of the most effective at protecting your computer, always at the top of the virus detection rankings.
Being a commercial antivirus, one might think that its free version may only be a promotional program to purchase the full version or that it is just a limited and ineffective basic protection.

On the contrary, instead, theKaspersky free antivirus is at the top of the ranking of best free antivirus and really provides the best possible protection, thanks to its engine hardly matched by other competitors.

La free version of Kaspersky Security Cloud antivirus is available for all Windows computers and can be downloaded for free, in your language, from Kaspersky official website.
The installation asks if you want to join the network Kaspersky Security Network to get better cloud-backed protection. The initial download is a very small file, but the installation process downloads the entire program which is 150 MB in size.

When installing for the first time, you will be presented with two options to enable:
- La protection against harmful tools, adware, auto-dialers and suspicious programs.
- Software detection which can be used by criminals, for damage your computer or steal personal data. This way, when you download a new program on your PC that comes with a sponsor or malicious software, they will be immediately blocked.
Before using the antivirus, Kaspersky asks you to create an account, which is however not mandatory (press the wheel at the bottom left to go to the settings to skip the registration screen). If you register an account, your computer will be registered with Kaspersky Online and you will be able to remotely initiate a scan, update the database and activate other features.

Kaspersky antivirus immediately activates the real-time protection of your computer against malware and malicious software. It includes the protection modules on files, on internet traffic, on messages of chat programs, on emails which are the essential and main ones. Therefore, the functions for secure payments, privacy protection, parental control, vulnerability scanning and some other functions that are not available in the free version of Kaspersky are excluded.
Kaspersky Security Cloud is very lightweight, it can work on anything even with background scans running. It makes sure that you don't scan when you are playing a game (game mode) or if your PC is running low on battery and won't slow down your computer startup. Kaspersky's technology stores data about new threats and advises what to change on your computer to make it even more secure. The protection also blocks network attacks, blocks ransomware attacks and scans emails.

To use Kaspersky antivirus, you just have to let it be active, start when you turn on your computer and update it automatically.
Basically the default options can be left as they are, except perhaps one, the one in the Performance tab of the settings, which allows you to postpone automatic scans if the computer is in use with high CPU and disk load. From the main interface, you can click the More tools button to see some additional features included in the free program (including the Kaspersky Secure Connection VPN service).
Among these are the on-screen keyboard to avoid risks from Keyloggers and then also the cloud protection, that of the Kaspersky Security Cloud which improves the detection of unknown threats and the verification of password security.

Computer scan to search for malicious software and viruses you can do it manually from the Scan section, which can be Full or Quick. The Full scan checks all files on all disks, while the Quick scan is the quick scan to check only the most sensitive areas. You can also selectively scan certain folders or scan external devices such as memory cards or USB sticks. Scanning with Kaspersky also becomes an option on the context menu that appears when you right-click on a file or folder.

With regard to performance, what is nice is that the free protection uses the same malware detection engines used by Kaspersky's commercial products. So, in a nutshell, Kaspersky Free's protection engine is the same as that of the complete Kaspersky Internet Security suite, which is one of the best in the business. Kaspersky Free is much lighter in terms of resource usage than even the paid Kaspersky antivirus, doesn't weigh much on your computer's memory, and has no limitations when it comes to computer protection.

Kaspersky Free Antivirus has one of the fastest scanning engines around, plus the ability to customize its defenses and malware protection that's second to none.

Download Kaspersky for free, full free version of the antivirus